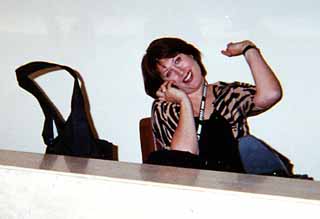 Those rewritten lyrics to "Rock 'N' Roll High School" had been my mantra for days, so walking to the gate at Bergstrom airport and hearing a voice cry, "Hey, you're going to Rockrgrl!" was music to my ears. Yes, I was going to the Rockrgrl Music Conference in Seattle, and so were the girls from Manor Road coffee-and-music-house Gaby & Mo's who hailed me. It was a good sign.

Conference mania infected corporations in the Nineties, and was epidemic in the music industry like a bad rash. Most of them were one- or two-time events too specific or regionally limited to be successful. South by Southwest and CMJ were among the most successful, getting a head start in the late Eighties during the demise of the mother of all music conferences, the New Music Seminar in New York.

NMS defined the formula for conferences when it started in 1980: Dazzle 'em at night with a diverse array of music in as many clubs as possible -- on the promise that labels will be prowling for new talent -- then educate them by day at a series of hotel conference room panels that address their particular niche in the music industry. Don't forget the big, overstuffed goody bag for all registrants.

Every conference since has striven for a wide swath of names, gender, and race across both its musical menu and conference panelists. Not that there's necessarily tokenism going on. It's just not parity to have one woman and one black on a panel of four or five to represent gender and race if those numbers are not reflected in the industry. Most panels probably should be all white male, all Latino, or all whatever. That would more accurately reflect the way the industry works, and would then justify all-female panels like publicity or booking, where so many women get their high heels in the door.

All-female panels rarely hold any charm for me, and I've been on a few. While I came up through underground newspapers, fanzines, and alternative weeklies, most of my fellow journalists came into the field with college degrees and landed jobs at The New York Times, Newsweek, and RollingStone.com. Their descriptions of sexism in the business were initially foreign to me. They talk about riot grrrls and Courtney Love, but what about Florence Greenburg, Estelle Axton, and Barbara Lynn? The point wasn't that disparity existed, but rather how much dialogue remained unspoken.

Then there are the women A&R reps, publicists, and managers. The radio programmers, the deejays, the agents, the club managers, the songwriters, the musicians, the singers, the techs. Women are represented in an astonishing number of areas, but no matter what the topic, the all-female panels usually end up sounding to me like bathroom bitch sessions after gym class.

Outside the hectic bustle of registration at the Renaissance Madison Hotel on Thursday, the weather is at its Pacific Northwest best for early November. Partly cloudy, windy, and cool, with intermittent sunshine and only a few scattered showers. In Seattle, that's tantamount to a blessing from the rain goddess to Carla DeSantis.

Resident of Seattle's Mercer Island, rocker, journalist, and mom, Carla DeSantis long ago noticed this lack of dialogue. Oh sure, there would be the occasional Rolling Stone story on Patti Smith or a sultry video by PJ Harvey on MTV, but the gaps aren't going to be closed by VH1 specials on "women in music." DeSantis wanted to see a print forum that didn't accuse or point fingers, but rather just talked with musicians who were women. So she started Xeroxing and stapling together Rockrgrl magazine.

Six years later, DeSantis has seen her DIY dream grow into a slick, full-color publication that sticks to its original philosophy of "no beauty tips or guilt trips," and features faces from Yoko Ono to Kathleen Hanna. She's tired of "women in music" being a topic, tired of "year of the woman" declarations, and tired of too few panels devoted to the issues and needs unique to female musicians. She wanted a conference that furthered existing dialogue.

Louis Jay Meyers, co-founder and former director of South by Southwest, had talked to DeSantis during New Orleans' LMNOP symposium in 1999. That year's panels featured a strong focus on women in rock. DeSantis' desire met Meyers' conference know-how like an arranged marriage, and the first Rockrgrl Music Conference was born.

With 550 RMC registrants and 250 bands and performers playing the music festival, the number of attendees climbs to nearly 2,000. Enough men registered to have a presence, but it's like going to Lilith Fair after being at a half-dozen Lollapaloozas.

Thursday's introductory panel "Everything You Wanted to Know About the Music Business but Were Afraid to Ask" offers early birds a chance to network before hitting that evening's showcases. The Women of Valor dinner honoring Ann and Nancy Wilson sells out quickly, leaving a few out-of-towners disappointed, but Ann Wilson performs that night, as does Wanda Jackson, Austin's Slum City and Lisa Tingle, New York jazz vocalist Arlee Leonard, and several dozen others.

"The day after my wedding, I woke up to the sound of construction crews building a fence around my house in Beverly Hills," Ronnie Spector recalls of her marriage to Sixties producer/songwriter/Svengali Phil Spector. "Most people build fences to keep others out. My husband built one to keep me in."

Spector's keynote address on Friday at noon receives thunderous applause despite Spector's losing her place in her notes often, improvising a few lines from songs, and even breaking down in tears at one point. Her gravelly voice recounts the oft-told stories of being manipulated and virtually imprisoned by Spector, ignored and uncredited for her contributions.

"I recently recorded another song," she says. "It's called 'I'm Never Gonna Be Your Baby.'"

Spector sets a good tone for the conference, because she's old enough to have something to say and cool enough to make you want to listen. With the age factor a panel topic ("Ageism: This Topic Is Getting Old"), Spector's wisdom opens the way for other women whose youthful days sit framed on the mantle. Gretchen Christopher of Pacific Northwest pop group The Fleetwoods talks about the rigors of touring in 1961, when her backstage requests for a full-length mirror and electrical outlet for her curling iron were considered excessive.

Other panels like "Mommy, Do We Have to Go On Tour?"; "Stalkers: When Fans Get Too Close"; and "Fishnets to Internet: Online Marketing Strategy" hit the mark of issues important to women musicians. Home Alive, a self-defense and awareness group formed after the rape-murder of the Gits' Mia Zapata, offers a "Self Defense Workshop." Typically, not everyone is happy. 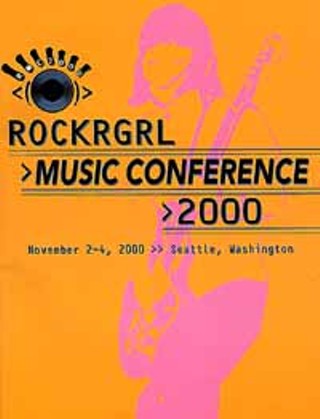 Austin's Rebecca Cannon (ex-Sincola) was accepted to the conference as a performer, but turned down the invite because she was slated to play Starbucks. A reviewer for Rockrgrl, Cannon complains "it felt like a slap in the face -- like playing McDonald's or Wal-Mart."

Might she have felt at home playing another venue like the Experience Music Project, Microsoft co-founder Paul Allen's multi-million-dollar shrine to rock & roll? It's probably too expensive for the budding Jimi Hendrixes of the world, but it does offer priceless memorabilia. Better yet, Cannon should call up DeSantis and ask to do a panel next year addressing corporate-empire rock.

"Courtney Love Will Appear Tonight at 6pm," read the small fliers posted everywhere Saturday morning. Inside the ballroom, Indigo Girl Amy Ray opens with a secondary keynote speech. The panels start rolling, pulling the biggest crowds of the conference for "Woodstock '99 to Eminem: When Did Women Become the Enemy?" in which an audience member shouts, "Will the real Slim Shady please shut up?"

The songwriting panel offers observations from Ann Wilson, Eliza Gilkyson, moderator Sue Ennis of the Lovemongers, and a refreshingly bright Jill Sobule, who probably wishes she had never recorded "I Kissed a Girl." The panels on Lilith Fair and "Skirting the Issue: All About Image" continue the track of female-specific issues augmenting general information panels on demos, label woes, and technical workshops. Even the buzz from the Woodstock and Groupies panel (which I moderated) can't compete with Courtney Love's imminent arrival.

Sitting at a desk while Love lists the demands for her appearance, the head Rockrgrl holds the cell phone away from her ear for dramatic effect. You can still hear Courtney's shrill tone, even over the conference crowd. After the conversation ends, DeSantis sets her jaw tersely.

"No cameras, no recorders," she says.

"Courtney will be just fine, Carla," says the writer and music-industry veteran. "Kathleen Hanna's not here."

Carla laughs and sets off to arrange security for Love's side-door entrance into the hotel and ballroom. Already more than 300 RMC-goers have lined the hall to the ballroom. As capacity is reached and doors are shut, a cry rises up from the several dozen women remaining outside: "We demand! To stand! Let the Rocker Girls in!" The chanting continues a few moments before Louis Meyers hustles over to let the grrrls in.

A blast of cold night air blows in as Courtney is led through a side entrance and into the SRO ballroom. Looking decidedly unglamorous but acting most businesslike, she ignores the questions solicited and begins one-on-one conversations with various members of the audience.

Never one to practice what she preaches, Love calls Britney Spears "a Barbie doll" and refers to Interscope's Jimmy Iovine as a "a little troll" before humorously confessing to being a heroin addict.

"I don't know how many of you knew that," she states matter-of-factly, "but it's true."

Love gets booed when she talks about Fred Durst of Limp Bizkit.

"He called me up and asked me how to respect women," she recounts. "I said, 'Fred, for starters, holding a party at the Playboy Mansion? Not a good idea.'"

Make no mistake, Love's appearance was important. The collective savvy of Ronnie Spector, Amy Ray, Kid Rock drummer Stefanie Eulinberg, Ann and Nancy Wilson, and all the others paled next to Love's sheer star power. Every conference needs a name, a ringer, one voice that will capture the spiritual purpose of the gathering and personify it. That's what Courtney Love's appearance did. She was flip, funny, and sometimes fatuous. She was smart, sly, and eloquent. She knows the value of her name and used that for a noble cause.

Women love to talk. We do. It's probably biological, since part of the physical act of nurturing is sound as well as touch. What's more important, however, is that conversations about women in music are now being addressed in an appropriate and focused forum. And the next time these subjects are broached at SXSW, CMJ, or anywhere else, RMC 2000 will be cited for its groundwork in bringing together those issues. If there's one thing women musicians like to do more than play music, it's talk about playing music.

The dialogue must continue.