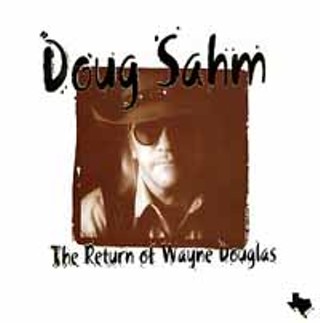 When the first word on an album is "bluebonnets" and the last word is "adios," you just know it's gonna be full-tilt Texas, and the long-awaited/delayed The Return of Wayne Douglas won't disappoint. Doug Sahm's final project before his death last November, The Return of Wayne Douglas is not so much a return to his many personas as it is a return to his first love: pure, Texas-style country music. That means sobbing pedal steel guitar, weeping fiddles, and the unabashedly cornpone Texas sentiment that Sahm specialized in, rousing and patriotic as any national anthem. "I'm a real country fan, sir!" he protests on "Oh No! Not Another One," a jab at Nashville's star-making machinery, in which he complains that Bob Wills' fiddle "has been replaced by laser beams and smoke." But Sahm doesn't just diagnose contemporary country's ills, he remedies them in his inimitable way, calling out to his steel player "Make it cry, Tommy" on "You Was for Real." Sahm also takes a swipe at the rapidly changing face of Austin on "I Can't Go Back to Austin," but then lovingly remembers its cosmic heyday in a newly arranged "Cowboy Peyton Place." The Austin icon penned nine of the 12 tracks on Wayne Douglas, co-authoring "I Don't Trust No One When It Comes to My Heart" with Clay Blaker, with whom he duets, and reviving another chestnut in "Dallas Alice," which he croons with an aching tenderness. He also delivers a shimmering take on Bob Dylan's "Love Minus Zero/No Limit." Throughout, Sahm lays on the Texas twang thicker than homestyle barbecue sauce, singing "San Antone is mah hometown" and all about "byooteeful Texas sunshine." It's a fitting farewell to one of the great sons of Texas, and the hidden track is equally poignant -- the last message on his answering machine.