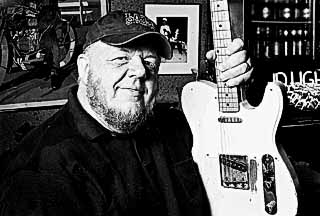 Not too many things from 1953 are much good today. Hell, in our throwaway culture, few things from back then are even still around. A '53 Buick? Bulbous, cumbersome, and primitive by today's standards. A 47-year-old computer? Puh-leeze. It'd be as big as a house, and still lack the power of an Eighties Mac Classic. And a TV set? Tiny black & white screen, lots of tubes to burn out, and about 120 pounds of wood, wire, and glass. Seems "vintage" might be synonymous with "scrap heap."

Then there's Fender's Telecaster electric guitar, one of the few things from 1953 that's still around and basically unchanged. Critics scoffed at Telecasters when they were first introduced, calling them "canoe paddles" and pointing out the bolt-on-neck construction, which made Leo Fender the Henry Ford of assembly-line guitars. Yet in that mass-produced instrument was a straightforward simplicity and sturdiness; salesmen would put the guitar between two chairs and stand on it to prove its durability. More importantly, the Telecaster proved the guitar of choice for countless country and rock players, luminaries such as James Burton, Jerry Reed, the Buckaroos' Don Rich, and Albert Lee.

Redd Volkaert has an honest-to-God '53 Telecaster, its scuffed neck and fingerboard bearing the well-worn patina of countless hours of play. Few pickers can do what he does; a cursory listen to Telewacker, Volkaert's 1998 Hightone release, makes that clear. Abetted by Billy Donohue on bass, Mel Watts on drums, and the remarkable Jim Murphy on steel, the disc is a showcase of guitar hijinks that will drive most guitar players to utter despair.

Volkaert puts his own barrel-chested vocals on "You're Still On My Mind" and a cover of George Jones' "I Hate You," plus a few others, but the gist of the CD is instrumentals. There's a tribute to Jerry Reed's whacked-out fingerstyle ("Reed My Tele"), the Buckaroos ("The Buck Stops Here"), and touches of Western swing, all with Volkaert putting the Tele through its paces with banjo-style finger rolls, breakneck flatpick runs, glissandos, and other highly technical backflips. At times, it's almost as if Charlie Parker somehow switched from sax to country guitar.

For players truly in their element, the guitar becomes an extension of their personality. The wild, outer-space country twang that Volkaert reels off on Telewacker is the perfect expression of both his disarming, easygoing manner and rather loopy sense of humor.

Short and burly, Volkaert has forearms about as thick as Popeye's, laced with faded blue tattoos and bricklayer's hands. His thick, stubby fingers look as though they'd be more at home tearing down a carburetor than tossing off wild-ass guitar licks. Born in Vancouver, British Columbia, Volkaert started on guitar at the tender age of 10, sometimes skipping school to get in a few extra hours of woodshedding. By the time he was 16, he was well on the way to playing in every Moose, Elks, Legion, VFW, nightclub, and beer joint in the area. In time, he found greener pastures in Alberta, playing in a three-piece band and making a living with the instrument until moving to Southern California in 1986.

"I ran into a bunch of rockabilly guys there," says Volkaert, "and got on that jag for awhile, which was real, real fun. So much of it is related so closely anyway, y'know, rockabilly, old-style blues, and Fifties country, so there's not a whole lot of difference. I worked a lot, played a lot, and learned a lot while I was doin' that."

It was in Southern California that Volkaert and Dale Watson originally crossed paths. Trying to get his foot in various doors, Watson would show up at different open-mike nights, and the two hit it off right away.

"Next day, we went for lunch, and he just seemed like a regular guy," Volkaert recalls. "We hung out all the time, played together a lot when we could, tried to get him work when he first moved out there. Shit, it wasn't two months before he had his own band together and he was kicking everybody's ass out there."

In time, Volkaert contributed some leads to Watson's I Hate These Songs; in turn, Watson was pivotal in Volkaert's moving to Austin. Actually, it was always just a matter of time before L.A.'s image-heavy atmosphere began to wear on Volkaert. Weary of piercings, clothes, and tattoos counting for more than actual musical talent, he decided to seek his fortunes in Nashville.

Once there, however -- not surprisingly -- Volkaert chafed at Music City's regimented, by-the-numbers session work ("Can you play just like Brent Mason did on that one song?"), and began doing a lot more live work in clubs and on the road. At various times, he surfaced with Ray Price, Lacy J. Dalton, and the Statler Brothers, among others, when their regular guitarists couldn't make it. But Nashville's reputation has never been predicated on live music. Instead, it's almost as if bands that play in clubs are looked down on because they aren't doing studio work.

"Delbert [McClinton] could come to Nashville and it'd be three-quarters full, where if he played at Antone's it'd be people ape-swingin' off the rafters," Volkaert notes. "If you get a developmental deal with a label where they're trying to groom you and make something out of you, they don't want you singing in the clubs, because then you're just seen as a club singer or player. They don't even want you to sing backup in someone else's band just to pay your rent."

Nonetheless, Volkaert put in a solid 11 years in Nashville, playing road gigs and Printer's Alley tourist-trap bars until a big break came in 1997 when he got an offer to join Merle Haggard's Strangers. Having known other Strangers, it was a natural fit. Volkaert cites original Strangers twanger Roy Nichols as one of his all-time heroes, so he naturally jumped at the chance to step in on a full-time basis.

"[Nichols] and Don Rich sold me on that twangy chicken-pickin' stuff when I was a kid, and I just went, 'Wow! What the hell is that?'" cracks Volkaert. "And of course, I was a kid, I liked the rock stuff, the country stuff. I was an Alvin Lee clone, Richie Blackmore freak, Albert King, Johnny Winter, Mike Bloomfield -- all those guys -- but then I heard the country stuff. I got into Buck Owens and Merle, studied all their stuff, and stole every lick I could find until I OD'd on it. When Merle called, I already knew most of his repertoire."

Volkaert's jazz/country/swing hybrid made him the perfect Strangers guitarist, playing parts as skewed and upside-down as Nichols' in the Sixties and Seventies.

"He could play the melody, but then he'd put one weird little stinky twist in there that no one would get but the other guitar players, and they'd all double over laughing," he laughs.

Ol' Merle has always had a bit of a fixation on Bob Wills and Western swing as well, which also serves Volkaert in good stead. The Telewacker liner notes cite Texas Playboys guitarist Eldon Shamblin as another of his heroes.

"Obviously he was a jazz guy, but he could play that stuff in a Western/country situation," says Volkaert. "He could play all that nice fancy technical stuff, but he could also get really greasy and raw. I think that's what sold his technical end to all the guys who weren't familiar with that kind of stuff. It'd kind of tease a guy, like, 'Hey, come this way, down this road.'"

With his wild days mostly behind him, the Hag likes nothing more than an acoustic tour-bus jam with Volkaert. Few people realize that Merle's no slouch on guitar himself, since onstage he plays mainly rhythm. Live, Volkaert pulls out licks and runs from a seemingly endless bag of tricks, just by way of having something to do. For something else to do, Volkaert holds down Sunday nights at the Continental Club with Heybale, the all-star lineup of Tom Lewis on drums, High Noon's Kevin Smith on upright bass, and the legendary Earl Poole Ball on piano.

Haggard's new Epitaph LP, If I Could Only Fly (see "Record Reviews"), captures him in a fairly intimate way, singing songs about growing older and letting go a little. For his part, Volkaert reels in most of his more oblique playing in favor of a more bare-bones approach. The result is a minimalist gem, hard-boiled but tender.

Merle and the Strangers notwithstanding, Nashville's name-dropping, schmoozey atmosphere began to take its toll on Volkaert's psyche. Not fitting into the scene where a handshake automatically comes with a business card and a demo tape, it was time for another move. Nashville's downtown was changing by leaps and bounds, renovating entire square blocks into line-dancing clubs like the Wild Horse Saloon and every plastic chain restaurant under the sun. Old friend Dale Watson worked on Volkaert, wife Nancy, and Chihuahua Ernie, and swayed them toward a move to Austin.

"I always enjoyed coming here, playin', jammin', hangin' out -- always saw tons of great guitar players here," explains Volkaert. "It always seemed like a guitar-oriented town, not so many keyboard players going around with guitar stickers on their synthesizers. It's more normal, seemed to me, as far as less pretense, no bullshit; guys play and they're happy to be working. Not like L.A., where you need five Marshall cabinets and 16 hair extensions."

So it's Wednesday night, time for dinner with the Volkaerts at the Manchaca Fire Hall. The conversation flows easily over the Fire Hall's delicious homestyle food and iced tea. We talk about cars, home improvements, TV series, flea markets, and uh, music. It's easy to see why Volkaert feels he fits in better in Austin. In his mind, he's just another country guitar player, enjoying a pepper steak at the Fire Hall.

Redd Volkaert, Merle Haggard, and the rest of the Strangers play Stubb's on Thursday, Nov. 9. Heybale returns to the Continental Club Sunday, Nov. 19, at 9:30pm.