What's up in the live music capital this week 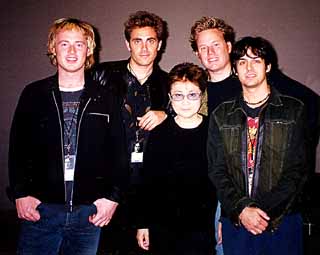 You've heard of the Bastard Sons of Johnny Cash, now how about the "Bastard Sons of Alejandro Escovedo"? Mr. E, who was once heard at La Zona Rosa referring to Davíd Garza as his "illegitimate son," has decided it's time to start paying some figurative child support. After Escovedo's show Friday at the Cactus Cafe, ("Griff [Luneberg] has barred me from the Cactus," insists Garza), Dah will, for a time at least, be joining Alejandro's band. Joe Eddy Hines, Hector Munoz, and Ames Asbell from Tosca will be along for the Cactus gig, after which Al will be touring with a pared-down outfit consisting of himself, Garza, and Eric Haywood (Son Volt, Richard Buckner). Those dates run through mid-December, and Escovedo's next plans call for the release of his Man Under the Influence album next spring and re-recordings of the best songs from his first two Bloodshot albums, this time with his Orchestra. Meanwhile, Garza's Web site now includes (alongside a note that he's "one or two songs away" from finishing his own next album) a "good news/bad news" warning to die-hard fans that "Sorry, no Davíd songs will be performed ... On the other hand you will love Al's music!"

Spanked in the French Quarter

If you go to see the Asylum Street Spankers at Antone's on Saturday, say so long to Christina Marrs and manager/hubby John Riedie. "The quality of life just isn't worth the cost of living here," says Riedie, echoing the sentiments of many in the local music community, so the couple will be moving to suburban Houston for a year or so -- there's a step up -- and ultimately plan to move to Riedie's hometown of New Orleans. "Since the band really doesn't play Austin very often," he adds, "it won't affect the Spankers too much." Saturday's show will be the last regular show of the year for the band, though on December 16, the Spankers are doing a holiday bash at the Scottish Rite Theatre, which will be recorded for a Christmas album to be released next fall. Spanks-a-Lot Records will also be releasing Wammo's Faster than the Speed of Suck album and the Stephen Doster-produced solo debut from Stanley Smith, with re-releases of the entire Spanker catalog and a new album also in the works for 2001. And finally, the Spankers are hoping to become Pearl Jam without electricity by starting work on a four-CD box set containing complete live shows from the last six years.Meanwhile, the ex-Spankers of Shorty Long continue their residencies at Ego's (Tuesdays w/Seth Walker), Empanada Parlour (Fridays), and Flipnotics (Sundays), and are talking about following the lead of Brown Whörnet, who have just issued a video of their excellent interpretation of the silent film classic Nosferatu as originally heard at the Alamo Drafthouse. The Longs are hoping to record and release a vid of the public-domain short Mystery of the Leaping Fish with their accompaniment as well, though Longster Pops Bayless says the group is not interested in touring it like the Spankers did with The Gold Rush. I'm told that Jim Jarmusch was looking for a copy of the 1916 junkie-detective flick (the showing of which was originally suggested to the Alamo by yours truly) while the filmmaker was in town last week -- perhaps he'd like to work with the band on their restoration job?

Is it worse than being the Gourds and having everybody think you're Phish? Is it as bad as being recently departed Chronicle distribution manager David McNair and getting calls at all hours for the record producer of the same name? One way or the other, local songwriter and Music Commission member Larry Cordle pleads that "you'd do me a really big favor if you'd mention that I'm not the Larry Cordle who wrote 'Murder on Music Row' and is up for a Ford F-150 full of awards of various types and sizes. I had nothing -- repeat nothing -- to do with that song. I haven't heard it and don't want to, either." With the song apparently having peaked, as well as the number of people who ask him about it ("our" Cordle says it's down to one a week or so, down from closer to a dozen), perhaps he won't ever have to. Still, he's already had his share of headaches over the tune, including e-mail from a magazine in Nashville firing questions at him about the ditty. "I played along until I realized he really didn't figure out that my snide remarks were from an imposter," Cordle says sheepishly. This isn't the first time the two have been mixed up, either -- the Nashville Larry also wrote Ricky Skaggs' biggest hit, "Highway 40 Blues," back in 1984. While working at a country music station in Denver at that time, Cordle says, "I first saw that name on the record label and thought someone had dropped orange sunshine in my coffee." The mixup hasn't been a bed of roses for the Nashvillian, either. "In 1990," Austin's Cordle confides, "my ex-wife sued him thinking I'd covered up some assets in our divorce. About a half-million dollars worth of assets! I guess he's getting back at me now."

He may return in March for six weeks to film The Rookie, but Dennis Quaid and his entourage decided to scout out the city first (things have changed since you did D.O.A. here, haven't they, Den-Den?), making the rounds Saturday night beginning with a visit to the Gourds CD release at Stubb's, where he and a few other sat upstairs alternately watching the band and the World Series on the bar's TV. Then it was off to Antone's for "celebritydom's favorite band" Lonelyland, where his special reserved table gave the audience license to gawk at one of Texas' favorite sons, seen backstage chatting up Bob Schneider, Stephen Bruton, and KLBJ's Dale Dudley. No word as to any comments about his coincidental appearance in the Preston Hubbard prison diaries last issue, but rumor is that Den-Den had a meeting with another ex-Thunderbird, Jimmie Vaughan, on Monday. Dudley and Bruton are slated to go in front of the camera soon, portraying a bar owner and one of his regulars in a television pilot called Mixin'.