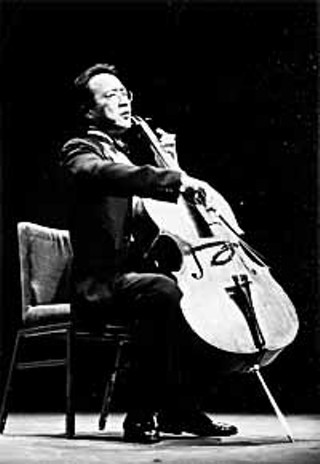 An audience with the master. Bluehairs out in force at sold-out Hogg Auditorium, strategically positioned greenery adorning the stage, and a single chair at dead center. A few minutes after 8pm, the world's greatest cellist strode out, graciously thanking everyone for coming as he took his seat. Seconds later, the opening strains of Johann Sebastian Bach's Suite No. 1 in G Major for Unaccompanied Cello filled the hall. Ma began the Prelude's lush arpeggios slow and steady, his bow gliding over the low strings like a Porsche hugging the asphalt. The Bach suites are the crème de la crème of cello literature, their complexity and beauty still unrivaled after nearly 300 years. Yet what even the most gifted students take years to perfect, and many never do, Ma made as effortless as playing "Three Blind Mice." Around the stately Sarabande, he began to sway. Slowly at first, he engaged his cello in an elaborate grand waltz without ever leaving his chair, rocking from side to side as the suite's elegant momentum took hold. Easing into the delicate minuet, then the lively gigue, his fingers danced over the ebony fingerboard with an almost otherworldly precision as his facial expression suggested he and Bach were communing somewhere on the astral plane. The way he cocked his head, his eyes not quite glazed over but alight with quiet passion, you could almost see the notes streaming from his fingers to his ears until the triumphal, open-chord concluding flourish. After the applause, the tux-clad 45-year-old ducked offstage to retrieve another cello, one specially modified to accommodate Suite No. 5's tuning. This time, in the melancholy key of C minor, he began to undulate once again, the full-bodied, majestic sorrow of the music assuming total domination over time and space. After intermission returned everyone reluctantly to the rainy UT campus, the hall grew quiet and Ma emerged to unfurl Suite No. 6 like a brilliantly ornate Viennese tapestry. In D major, the Sixth was much brighter (if D minor is "the saddest of all keys," D major is the most uplifting), marked by clarion upper-register harmonics, and again, Ma's telepathic interplay between bow, fingers, and strings. Calling it impressive is akin to saying the Pieta is a cool-looking statue. It was as riveting a musical performance as I've ever witnessed, besting even Hank Williams III's apocalyptic hillbilly meltdown at the Continental Club later that evening. This was how it's done.