Microradio back in Austin, Fortune 500 gone. 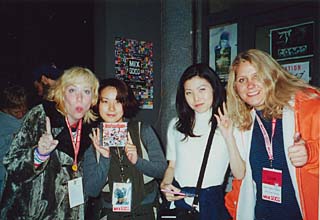 Return of the Fame Game

It's that time of year again, when the Chronicle music staff gets together and places our votes toward who will be elected into the Rock & Roll Hall of Fame. As always, we could only choose eight names out of 16 nominated, thus we voted for AC/DC, because they rock, and against Aerosmith, because we had already voted for AC/DC so they seemed superfluous; for Black Sabbath, because Ozzy has said he doesn't want to be in the Hall of Fame and forcing him in, we feel, will be acceptable payback for that Alamo thing; against Solomon Burke and the Flamingos, because we voted for them the last several years and that hasn't worked; against Michael Jackson, because in his own words, he's the "King of Pop," not rock & roll (and besides, he frightens us); for Brenda Lee, because as Margaret Moser points out, it's pretty unbelievable that a woman could achieve all that she did in the industry during her time; for Lynyrd Skynyrd, because of a) the tragic death factor, b) the inescapable fact that "Free Bird" is part of all of our lives, and c) maybe if they win, they'll feel it's okay to stop touring. We also voted against Lou Reed, (already in with VU), Paul Simon (already in with Art Garfunkel), Bob Seger (because we'd rather listen to some real old-time rock & roll), and Steely Dan (huh?), and for the New York Dolls, Queen, Patti Smith, and Richie Valens, because, if you count Patti's hubby Sonic, they all have the death factor, and we all like them. (Except for Queen. That one is entirely my fault.) In the music industry, the Hall of Fame's annual awards ceremony (which will take place in a few months after all the lazy writers and such manage to get their votes turned in) is an "event," and the events never stop: This week, a number of Austin bands and industry types are headed to New York for the CMJ music fest, while South by Southwest co-founder Louis Jay Meyers is readying the first annual Rockrgrl music conference in Seattle, Nov. 2-4. The keynote speakers are Ronnie Spector and the Indigo Girls' Amy Ray, and Austinites making the trip include Slum City, Lisa Richards, Lisa Tingle, Rebecca Cannon, Kim Grossman, and Eliza Gilkyson. Meanwhile, it looks like that other festival he started -- and got out of -- is doing fine; SXSW 2001 is expecting 15,000 participants, and time is running out for bands hoping to showcase at this year's festival. Nov. 19 is the final "late application" deadline for tapes/CDs and bios (and that $20 application fee) to arrive at SXSW Music Festival, P.O.Box 4999, Austin TX 78765. Check out www.sxsw.com for further information on the SXSW Music Fest 2001, which runs March 14-18. Oh, and this just in: Ray Davies has been confirmed as this year's keynote spesker

No, local microradio hasn't pulled up roots and moved to Arizona. However, out of the three area "pirate" stations shut down by the FCC in the last two months (KIND, Radio One, and Radio Free Austin), at least one frequency has managed to rise from the ashes and return to the airwaves, albeit in an even more limited capacity than before. Apparently, it took the good folks at Radio Free Austin less than 72 hours to get a backup transmitter into operation and re-establish a weak signal again and get back on the air. Outside Austin's borders, the fight continues, with more and more fuss being raised over the issue of microstations and government interference in their broadcasting, as seen in The New York Times, where a headline on the front page of Monday's Business Day section exclaimed that the "F.C.C.'s Rift With Industry Is Widening." For many locals, it's just a relief that last week's Fortune 500 CEO Forum (which some claim is the trigger that led to the microstations being shot down) has ended. Some say they're especially glad to see the end (for now) of all-Jaguar traffic jams, but for me, I'm just glad I won't have to drive around any more limousines jutting awkwardly out into the street from their parking spaces at local "Gentlemen's Clubs." I mean, does that just scream, "I'm unfathomably wealthy and still can't get laid!" or what?

J Is for Abra

It's official: Abra Moore is now on the roster of Clive Davis' highly anticipated J Records. Says manager George Couri via an e-mail press release (taking time out between Dynamite Hack press releases), "Once Clive left Arista in June, there was immediate concern as to whether or not staying at Arista was the best thing for Abra." When the dust recently settled between Davis and BMG, it turned out they both wanted to keep Moore, but in the end, the choice was made to go with Davis' new venture, due to the relative amount of attention Moore could expect to command from the label. J, under Clive and the same department heads and distribution company, is splitting its attention among only 10 acts, most of which, says Couri, are R&B, hip-hop, and rap, minimizing the competition internally. "And Clive being perhaps the most legendary and successful figure in music business history," concludes Couri, "makes us feel pretty good about being a part of, as Clive refers to it: 'The first instant major label in history.'" The recording process itself isn't quite that "instant" yet, of course, so don't expect to hear Moore's debut album for the label until mid-to-late spring of next year. In the meantime, Abra will play her first show in Austin in more than a year and a half this Friday at the Cactus Cafe and will be on KGSR to play two new songs today (Thursday), which you can also hear by turning your computer dial to www.kgsr.com at 3:30pm.

It's not the first time that Michael E. Johnson of the Killer Bees has gotten stung by the surgeon's knife, but that doesn't make it any easier. There's a benefit coming up this Sunday at the Flamingo Cantina for the longtime Austin reggae fixture to help cover medical costs from his recent kidney failure, which forces him to go on dialysis every day and leaves him in need of a transplant, the sooner the better. The Bees have been a staple on the Austin scene for 15 years, and during that time, Johnson has endured chronic high blood pressure and three years ago went through triple bypass heart surgery, says partner Malcolm Welbourne. Expect Papa Mali as the headliner and "house" band, with visits from many of the old Bees from years past (though Welbourne stresses that this is not being billed as a reunion). Some artists will be bringing their whole band, others are just showing up with their horns or sticks, most are playing about three songs and jamming with each other between 5-9pm, and guests include Louis Jay Meyers, Paul Mills, Courtney Audain, Malford Milligan, E.R. Shorts, Wally Doggett, Mark Mercado, Claude 9, Polk Shelton, Ragga, Gino Ronde, Hoppy, Phil Raymond, Phillip White, and Forlini & Cross. And yes, Welbourne says Johnson is expected to add a few notes of his own to the proceedings. Also, if you can't make it to the show but want to add a few (bank) notes toward Johnson's expenses, call Cristala at 512/708-8228.

Tom Lewis, the old drummer for the Wagoneers, has moved back to town from Nashville, if you haven't already noticed him playing with the Hollisters. He's also put together an all-star band that plays the Continental Club every Sunday. Heybale! is Lewis plus Redd Volkaert on guitar, Earl Poole Ball on piano, Gary Claxton singing, and Kevin Smith on bass. By the way, you may have noticed Volkaert performing with Merle Haggard on the late-night Leno/ Letterman circuit recently; whether you have or not, you can catch him aiding and abetting Haggard live at Stubb's on Nov. 9... Culture clash of the week came when a Lord Douglas Phillips/Le Tigre gig at the UT student union was a bit too much for the nearby Yo-Yo Ma show at Hogg Auditorium. When the Tigre sound check began during Ma's set, a PAC spokesman rushed over to the loud rockers to ask them to wait for the end of the solo cello performance before blasting forth their own music. Later, Yo-Yo Ma himself was seen outside, apparently attempting to smooth any feathers that might have become ruffled. Lord Douglas Phillips drummer Terri Lord (who had just gotten off the plane from Japan, where she had just played with the Sexy Finger Champs) says the classical performer shook UT Concert and Music Committee person Johnathan Lee's hand apologetically and joked that he had tried to play along with Le Tigre, but that just wasn't cutting it. Further, he joshed that he'd like to join the bands onstage for their delayed set -- a notion that mortified the promoter of his show, who was standing nearby. For a review of the show, see this issue's "Live Shots"... Finally, I can give you a guaranteed release date for Doug Sahm's Return of Wayne Douglas! All parties have agreed, signed all the papers, and the disc comes out officially on Nov. 7. Get one quick -- the limited-edition gold-embossed packaging will not be used for any later editions... When Dexter Freebish told me they were keeping their tour options open, they weren't kidding. Since the Chronicle's recent feature on the band, they report that they've played shows with Barenaked Ladies, Fuel, Sister Hazel, and Blues Traveler... The less-talked-about half of Timbuk 3, Barbara K, has a brand-new release, Reach, which features bass and vocals from Mark Andes of Spirit, Canned Heat, and Heart, and contributions from Robbie Gjersoe and Wally Ingram. K is performing this Saturday at Flipnotics 7th Anniversary celebration, and Sunday at Antone's with her band A Few Good Men... The Conrads' new residency at the Black Cat on Wednesdays is causing a few ripples down that direction on Sixth Street nowadays. Named after the fact that Conrad Choucroun isn't in the band (kinda like the old band Hunter Darby), the Conrads feature four solid hours of playing from Landis "Slowhandis" Armstrong on lead guitar, Toadliquors bassist Matt Eskey, Stingers' stickman Andrew Gerfers on drums, and Houston expatriate vocal sensation David Beebe... Finally, at last count, things were still a "go" for Oct. 27's Sound Exchange Anniversary show behind the store, with the Motards and Poison 13. Last week, I got an e-mail from P13's Bill Anderson saying that, "Mike [Carroll], Chris [Gates], and I practiced with Jim Kanan, our original drummer, who hasn't played the drums in six years (actually, he hasn't owned a drum set since 1985). Unbelievably, he played every song about perfect. In fact, if anything, we sounded tighter than we did in 1984. Are we better musicians now or do we just abuse way fewer substances?" Guess we'll find out at the show...