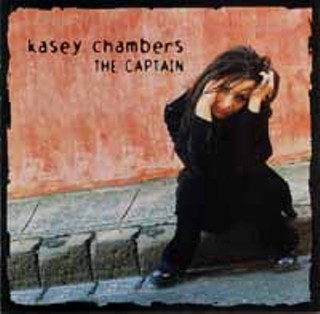 Expect to have your heart melted. The Captain may be her debut, but 24-year-old Kasey Chambers, who's been performing with her parents and brother in Aussie country band the Dead Ringer Band since she was nine, comes to a wider audience in full flower, not first bloom. A charged roots rock affair pairing Chambers' uncommon honesty with one sly melody after another, The Captain lists Buddy and Julie Miller among its guests, which is appropriate given Chambers'brand of country soul and starkly drawn folk. In fact, Chambers possesses some of Julie Miller's chirp in her high-pitched voice. While women with similar voices tend to get too cute (and eventually irritating), Chambers avoids such pratfalls with a determined amount of sincerity and lyrics that are both forceful and mature. The kicker is that she covers a lot of bases musically, and it's this diversity that makes The Captain such a delight. From the sweet country rock of "Cry Like a Baby" and back-porch, bluegrass-tinged "This Flower" to the low-down honky-tonk of "The Hard Way" and gospel chorus of "Last Hard Bible," Chambers puts her heart and soul on the line every time, and has the listener believing she's lived these hard times and heartbreak. The result is as remarkable a debut as anyone's made in a very long time.