Paying the Cost To Be the Boss

B.B. King, On the Road Again – Make That Always 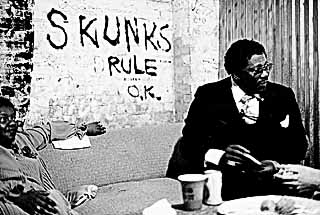 You try interviewing the "King of the Blues." Robert Johnson may embody the myth and the mystique of the blues, but another Mississippi sharecropper lived to tell the world: Riley B. King -- B.B. King. Only a third son of the MS Delta, 82-year-old John Lee Hooker, who headlined last year's stellar Antone's Blues Festival at Waterloo Park, possesses a comparable legend, but then neither he nor Johnson can lay claim to King's real musical legacy: The 75-year-old bluesman is perhaps the single most influential guitarist of the last half century. Period, exclamation point. B.B. King wrote the book on playing the electric blues. The patent's in his name.

This Friday, said trademark arrives stamped on the B.B. King Blues Festival at Auditorium Shores. Featuring Buddy Guy and Susan Tedeschi, both of whom put in strong showings at Waterloo Park last May, as well as acoustic blues bard Corey Harris and local whiskey-throated mama Toni Price, the B.B. King Blues Festival is said to be the last musical convergence on Town Lake this year. That's a shame given the recent success of KLBJ's two radio concerts at the former site of the Fabulous Thunderbirds' fabled Riverfests and watery grave to Austin's Aquafest. Then again, leave it to King to end the four-show season in high style; call it a belated birthday party for the Rock & Roll Hall of Famer, Blues Foundation Hall of Famer, and Grammy Lifetime Achievement Award winner, whose birthday was September 16.

Reached by phone at his home -- another hotel room on the road -- the King sounded tired, and while not terribly expansive on many subjects, he was the very definition of magnanimous. What do you expect from the King of the Blues, with whom just an audience is honor enough? What do you say when the first question asked is his: "So how are you this morning?" In awe, Mr. King -- in awe.

AC: And you're still out on the road.

BBK: Still on the road.

AC: Why have you stayed so busy at an age when most people retire? What has kept you on the road?

BBK: Well, two or three things. One of them, I've got that terrible disease -- "need-more." [Pauses]

AC: There's a song on the new album called "I'm in the Wrong Business." Ever feel that way?

BBK: [Surprised, laughing] Yes! Yeah, I felt like that many times.

AC: The new album is titled Makin' Love Is Good For You. Kinda risque, don't you think?

AC: By all means. What made you call it that?

BBK: I heard [Tony Joe White's] song a long time ago and liked it. I just thought that it would be a break from what I've done before.

AC: You've had a string of really fine albums in the past couple of years, 1998's Blues on the Bayou, '99's Let the Good Times Roll: The Music of Louis Jordan, and most recently Riding With the King with Eric Clapton. Do you feel you're at a creative peak right now?

BBK: I hadn't thought of that, but since you mention it, it could be. I had creative control over B.B. on the Bayou and Makin' Love, so they wouldn't have come out if I didn't think they were pretty good.

AC: Both albums were recorded in Louisiana, coincidence?

BBK: We found a nice little studio down there where we could move in and get the hours we wanted when we wanted them. It's a good studio, just outside Lafayette, Louisiana.

AC: Were you happy with Let the Good Times Roll?

BBK: Oh very much so.

AC: Do people remember the Louis Jordans of the world like they're supposed to?

AC: Are people gonna forget who someone like T-Bone Walker was?

BBK: It's gonna be hard, because he had so many disciples, and I'm one of them. I talk about him so much it would be hard for his name not to be out there.

AC: A good Texan. Do you have an affinity for Texas?

BBK: Well, I'll tell you like I think about Mississippi. A lot of Mississippians went to Chicago and they called it Chicago Blues. I just think it's the guy from Mississippi who went there and started to play the blues. I think of T-Bone, and oh, Gatemouth Brown and a lot of them as great Texas players that play the kind of music I like.

AC: You had a close relationship with Stevie Ray Vaughan.

BBK: That's another one. He was like a son to me. He had such a beautiful personality. He was a great musician. And just a real nice person -- one of the type of people that we could use many, many more like him.

BBK: Yes I did. I knew him very well. I knew him before he gained his popularity. I knew him when he was playing with Little Richard, in the rhythm section.

AC: So much has been written over the years comparing SRV to Hendrix. Do you see that connection?

BBK: Well, no I don't, really. Jimi Hendrix, to me, was the greatest rock & roll guitarist we had at the time of his death. Stevie Ray was a great guitarist -- not just rock & roll. He played rock & roll as well as most of them did and blues better than most of us did. Like I said, he was just a great, all-around guitarist. And he was Stevie -- he didn't sound like nobody but himself.

AC: You worked with one of Stevie's disciples on Riding With the King -- Doyle Bramhall. Another Austin guy.

BBK: Yeah, I call him Darryl. [Laughs] I called him that so much that he started answering to it. Yes, he's a great songwriter. He's a great guitarist. People talk about his writing, but he's a heck of a guitar player.

AC: Your own playing, your lines are so fluid -- so full of life. What goes through your mind when you're playing live, when your eyes are closed and you're playing a solo?

BBK: I guess I'm kinda like an actor or an actress. I'm portraying the people I'm thinking about. For example, the song "Nobody Loves Me but My Mother," I can see this person feeling like that. I'm in the same setting. Whatever I'm singing about, generally, I'm in there, with these people in that setting. I'm playing what I feel about it.

AC: There's a whole new generation of blues guitarists -- Jonny Lang, Susan Tedeschi, and a woman who's played your club in Memphis, Deborah Coleman. Are they upholding the tradition?

AC: You lived such a long, rich life. Do you feel that at this juncture you're just trying to squeeze what's left in?

BBK: [Laughing] I don't know. I don't know. I've done so many things. There is one thing that I hope to do. I hope to be featured as a co-star in a full-length movie one day. That's one thing. I've been in many movies, but it's always a cameo appearance, usually being myself. But I'd like to co-star with some of the great stars of today -- young or old, it doesn't matter.

AC: Anybody working on this for you?

BBK: Well, yes. There are people coming up with stories, but nothing yet that we've accepted. I've been busy out on the road.

BBK: Since the early Fifties.

AC: Like it? What are your impressions of it?

AC: Funny you should mention Willie Nelson. You remind me of him, in that you have transcended your musical genre and become simply B.B. King.

BBK: That's what I was trying to say about Stevie Ray -- he was just Stevie. So is Willie. He's such a great, talented man. His heart is as big as a truck. He's just a beautiful man. He's done so much for so many, and I'm one of them.

AC: You're of that same class. You're like Louis Armstrong; it's not about a jazz trumpet player, it's about Satchmo.

BBK: Well thank you. I knew him -- Louis Armstrong. He was a great, great musician and a great person.

BBK: Thank you. Thank you so much.

B.B. King, Stevie Ray Vaughan, Doyle Bramhall, Eric Clapton, Makin' Love is Good For You, Blues on the Bayou, Riding with the King