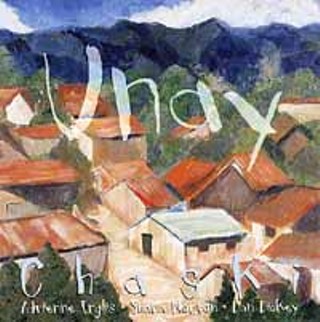 Chaski was an Incan postman, a messenger who literally ran between villages with the news. Local trio Chaski spreads the word too, their message simple: Enjoy the sweet folk sounds of Latin America. Made up of Shana Norton on harp, vocals, and accordion, Adrienne Inglis on flutes, toyos, tarka, maracas, zampoñas, quena, and vocals, and Dan Dickey on requinto, pito, tarka, gritos, guitar, cuatro, charango, and vocals, Chaski has performed in Texas since 1991. On their fourth release Unay, the trio braids a convincing 50-minute, 17-track lacework of mostly Peruvian and Bolivian music. "Boquita de Cereza" is an upbeat Bolivian opener, driven by charango (small shell-backed guitar) and guiro (ridged scraper), with a characteristic quena (sonorific wooden flute). On Unay, Chaski does an untraditional thing for a Latin American album by including three Sephardic songs, music of the Spanish Jews expelled by the Spanish crown around the same time Columbus invaded America. Because Sephardic songs like "Adío Querida" have the same acoustic lightness and lyrical reality as the Andean works, they mesh well here. Unay is a decidedly local affair, and boasts being "arranged, produced, recorded, mixed, mastered, and manufactured in Austin." No arguments with the results, an even-paced and enjoyable listen.