Don Walser I'll Hold You in My Heart (Valley Entertainment) 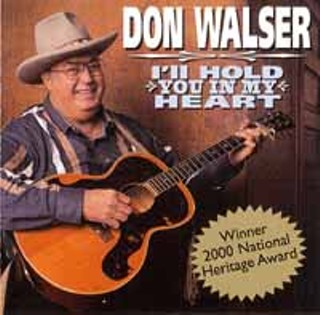 I'll Hold You in My Heart (Valley Entertainment)

One of the best things about living in Austin after all these years is the knowledge that you can (still!) saunter into Jovita's most Tuesday nights and hear Don Walser sing some of the best real country music anywhere. That said, bringing the oft-revelatory nature of Walser's live show into the studio has sometimes proven problematic. I'll Hold You in My Heart underscores the point with its first two tracks. "Yodeling the Blues" leads off with a perfunctory display of Walser's trademark yodel underscored by fiddle and steel guitar solos played a little too close to the vest. Then, "Sweet Thang & Cisco" veers toward Ray Stevens country with a well-worn narrative about having to call the wife from jail when the go-go nudie bar gets raided. These songs aren't bad, but they don't play to the singer's distinctive emotive strengths. The album's first undisputed keeper is Walser's rendition of Eddy Arnold's 1947 hit "I'll Hold You in My Heart ('Til I Can Hold You in My Arms)." Walser's voice fills the tune with bittersweet longing, and the mariachi-style horn arrangement is guaranteed to get your eyes a-glistening. At the other end of the romantic spectrum, "If You Don't Want to See Me Going (Turn and Look the Other Way)" nails the empowered breakup vibe and would sound great on a jukebox in an empty dance hall. Another highlight is Walser's take on Merle Haggard's "Mama's Hungry Eyes," a heartbroken elegy perfectly suited to his style. I'll Hold You in My Heart would be a better album if all the material were as well-suited, but there's still plenty to enjoy here.