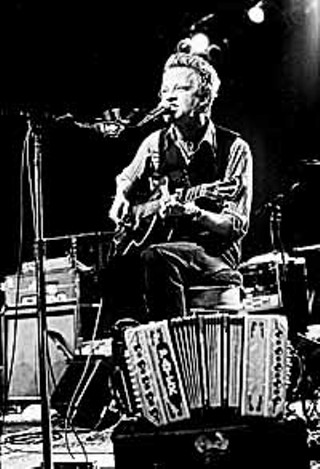 David Eugene Edwards at the Austin Music Hall, 1998 (Photo By John Carrico)
The hard, plain truth about 16 Horsepower is that they're a supremely talented band who are destined to be overlooked. That's a crime given that few bands' musical visions are as pure. Any one of their three albums, 1995's Sackcloth 'n' Ashes, '97's Low Estate, and the new Secret South, might lead one to believe that the Denver-based quartet is the product of a Bible-thumpin' preacher man who's taken his message on the road, which would be a perception not far removed from the group's gospel truth.

Like a faded, sepia-toned daguerreotype, 16 Horsepower evokes the past with medicine-show instrumentation revolving around the tent-revival charisma of David Eugene Edwards, grandson of a Nazarene minister. Their music is as supple as tanned leather and as intricate as hand tooling on tough hide. 16 Horsepower could easily be categorized as church-going mountain cousins to the Gourds and Bad Livers, or bastard sons of an unholy alliance between Ry Cooder and a Bible-spooked Tom Waits.

"My grandfather was a preacher. My father was supposed to be a preacher but he went the other direction," Edwards chuckles dryly. "He was a biker in the neighborhood I live in now. Then my stepfather went to school to be a minister as well. They are Church of the Nazarene, which started in Texas. My father died when I was younger, and my mom had a pretty hard time of it. I spent most of my time with them and my grandparents. We went to church a lot -- a couple times a week."

Edwards makes no bones about his inspiration for writing and playing. It comes from a deep and abiding religious faith that does not deter him from using the rock & roll stage as a platform for his message. And he is blunt about that belief.

"I still go to church," he asserts. "I didn't want to be a preacher. I considered it, but I don't have it. Music is where I feel comfortable, so it makes sense for me to follow that."

Nevertheless, in the traditional conservative Christian view, rock & roll is one of the main highways to sin, with a host of songs focusing on lust, sex, and praying for the strength to overcome temptation. Edwards doesn't seem to be overly tempted by the salacious allure of rock & roll, his lyrics placing him closer to prophet than preacher. One gets the distinct impression it would be a breach of etiquette to query him about rock & roll's pact with the devil, but the question is virtually moot since 16 Horsepower does not play rock & roll per se. Still, Edwards knows the pitfalls of performing in that arena.

"Religion is the most interesting part of our music to most people," he says. "And the instrumentation. People always ask me, 'What is your specific message?' and of course my message is that there is a God. But I don't have a particular message. Usually I'm singing to myself, in every song, about things I know to be the truth. It's not like I've written a song for people hoping it will be good for them. My songs speak to me, my songs are there for my benefit as well as for anyone else. It's not stuff I'm making up, it's been around forever. Everyone has to deal with it."

Because "message" songs, especially those of a religious nature, tend to alienate general audiences, Edwards is pragmatic without compromising his intent.

"[If] people are uncomfortable with the message, they will move away from it, without a doubt. Especially if it's not the message they're looking for. Everything has a message. That's the calling that I have, to present the message in a way people who ordinarily wouldn't care about it will think about it."

Considering 16 Horsepower's flat, almost dour approach to music with a message, Edwards is personable, forthcoming, and charming -- if a tad guarded -- when he speaks. He's occasionally self-deprecating, and not above poking fun at his profession. He also takes great pride in the time he spends at home with his wife and children while finding time to hang around the local guitar shop.

"A friend of mine has a shop nearby in Chattan I go to," explains Edwards. "I don't really have the money to collect instruments, otherwise I'd probably buy a new guitar. I just play the instruments that I get. I like playing them all, but I use banjo the most."

Edwards' banjo picking drives many of the songs on 16HP's three studio albums, but he's equally proficient on guitar, concertina, accordion, and hurdy gurdy. Parisian Pascal Humbert, on electric and stand-up bass, and Jean-Yves Tolar, another Parisian who plays drums, piano, and occasionally percussion, were the then-trio's other original members; guitarist Stephen Taylor joined the band for Secret South, signing on for a recent European jaunt and the current American tour.

"We tour Europe a lot between records, because the demand for us is greater over there," reasons Edwards. "If they had their way, we'd live over there. France is our best country, as far as sales go; the Benelux countries are the best for crowd response. They know the language; in countries like France and Germany, they rely more on the music and the feeling of the music than the words.

"It has to do with the type of band we are," he continues. "It's been two years between records and we still sell out every show we play there. They really love roots-based music in general; Gypsy music is huge there. But we want to play in America as well, because we love it."

America doesn't have as much interest, however, and that which makes 16 Horsepower's music so compelling is also what keeps it from being earmarked for the Top 10, MTV, or the cover of Rolling Stone. They're a handsome foursome, but lack fashionable duds, trendy hairstyles, or popular philosophy. They don't make videos with half-naked girls, their albums are straightforward recordings, and they don't feel the need to throw in any reels or obligatory dance tunes to lighten things up.

"The subject matter is what keeps me going," Edwards states. "I don't write just to entertain people. I've never considered myself an entertainer of any sort. To me, the message is far more important than the music or the people involved. For me to perform in a consistent manner of intensity and caring about the music and respect for the music is because of the subject matter. Hopefully, people are getting from it what they are needing at the time.

"The way we write, music is always first and paramount. I put the words on top of it. I'm always writing lyrics but I don't write 'songs.' I'm always writing things, and when it comes time to put words to a song, I just pick out words from my notebook and put them together like a puzzle."

Edwards laughs aloud at the notion of songwriting as a "pleasurable" experience.

"I don't do much writing on the road," he says. "I write more when I'm home doing daily chores. I come up with a lot more being with my children than being on the road. I almost feel like whatever I come up with on the road is too self-indulgent. It's not that I don't write while traveling, it's that I am not concentrating on it."

It would be a mistake, though, to assume that 16 Horsepower's music is strictly message-driven. In concert, the band transcends lyrical intent with vibrant performances and a striking musical rapport that enchants the audiences, leaving them rapt, if not occasionally rapturous. Edwards favors minor chords in his compositions, and his songs blend mournfully but distinctively. And while the MTV image is not a priority, the group's three albums bear a cultivated nostalgia in their graphic design that never rings false.

"The album art is something we enjoy doing," reveals Edwards. "People think you're conceited when you present yourself a certain way, but I like to be able to do it creatively. I want us presented in a way that's almost cinegraphic. I like old pictures, I like old movies, I like old books, I like old instruments, I like old things. Stylistically, it's what I like. That's not to say I don't like some new things, but this is what I want to see on the cover of our records and in our art.

"I'm not into the thing of, 'Oh, I'm just a simple guy with simple beliefs and simple pleasures, just wearing brown.' Witness the whole alternative-country thing; that's just a big act itself, but there are so many people doing it nobody thinks it's an act."

Edwards makes this last statement with an understandable touch of disdain. While the average alt.country band likes to deliver their countrified rock with a wink and a smirk, Edwards and 16 Horsepower are tearing up "Black Lung" from Low Estate like muleskinner calls, giving the devil his due on Sackcloth's "Black Soul Choir," or reminding mankind of the wages of sin on the new album's "Clogger." 16 Horsepower is half old flattop with juju eyeballs and half Holy Roller, sounding like they should be playing snake-handling ceremonies instead of nightclubs.

Their music is righteous and mournful, full of fire and brimstone, but it would be a mistake to assume that Edwards is out to convert his audience. His relationship with religion is a personal commitment, and he finds as much peace and satisfaction being the messenger as bringing the message. Sin begets salvation, and damnation brings redemption. That's where 16 Horsepower draws its strength.

"The message is urgent for everyone that it reaches," finishes Edwards. "I'm desperate to get it out, really, for my own sake as well as anyone else."