It Don't Matter Who's in Nashville, George Strait Is Still the King 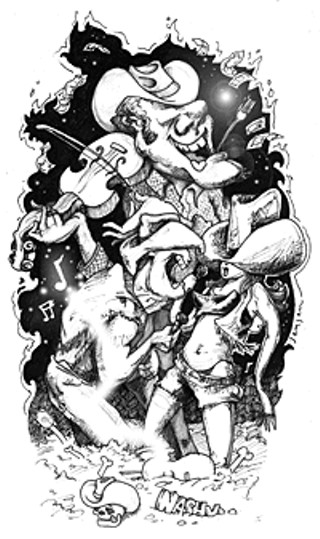 By Nathan Jensen
At the 1999 Country Music Association awards, former Entertainers of the Year George Strait and Alan Jackson premiered a new duet. There are few, if any, higher-profile events in Nashville than the CMAs, and a teaming of two of the industry's top-selling male vocalists live on network television would normally be cause for much back-slapping and self-congratulating among the upper echelon of Music Row executives. Only that evening, Strait and Jackson came not to praise country music, but to bury it.

"Someone killed country music," Strait sang. "Cut out its heart and soul."

His co-counsel then offered up a motive, doing his best George Jones.

"The almighty dollar," Jackson drawled, "and the lust for worldwide fame slowly killed tradition, and for that, someone should hang."

Titled "Murder on Music Row," the duet was equivalent to Charlton Heston coming out for gun control at an NRA convention. Mentioning Hank Williams, Merle Haggard, and "ol' Possum" by name, the song lamented a world where "the steel guitars no longer cry, and fiddles barely play." Needless to say, it was not a hit.

It's possible Strait and Jackson were being a little overdramatic, and that "Murder on Music Row" failed to top the charts because it came off like an episode of Matlock. It did, however, shine a light on certain issues Nashville doesn't like to talk about. Nobody expects rock & roll to still sound like Buddy Holly, and very few people lose sleep because current R&B artists like Sisqo and Jagged Edge have little in common with Big Joe Turner or Hank Ballard & the Midnighters. Country music, on the other hand, is the only mainstream genre where it's often considered a sin to change with the times.

Take for example, the Dixie Chicks. A few weeks ago, they sold out the Frank Erwin Center, a feat previously accomplished this year by Bruce Springsteen, Backstreet Boys, 'N Sync, Red Hot Chili Peppers, and two World Wrestling Federation TV tapings. The Chicks, who started out over a decade ago playing for tips on street corners in Dallas, are the biggest thing to hit country music since the early-Nineties "hat act" explosion of Garth Brooks, Clint Black, Tim McGraw, John Michael Montgomery, and Jackson, among others. They couldn't have come along at a better time for Nashville, either, as country music's commercial fortunes have plunged considerably since peaking around 1993. The Chicks' last two albums, Wide Open Spaces and Fly, have both sold several million copies.

The concert was heavy on what "Murder on Music Row" labeled "drums and rock & roll guitars mixed right up in your face." (For the record, there was also a fiddle and a steel guitar onstage.) It was a prime example of, depending on your point of view, country's current identity crisis or its widening purview. Taking the stage to the strains of Lenny Kravitz's "Fly Away," the trio covered Bonnie Raitt and Sheryl Crow songs to go along with their sizable stable of hits, running the stylistic gamut from the Celtic-tinged "Ready to Run" to the stone-country "Tonight the Heartache's on Me" and breakneck-bluegrass "Sin Wagon." There was very little about the evening that Loretta Lynn would have recognized as country, but her good friend Patsy Cline would have felt right at home.

The Southern literary journal The Oxford American recently put out a CD to accompany its all-music issue. Among tracks by Doc & Merle Watson, Wilco, Dolly Parton, and Tom Petty & the Heartbreakers was Dean Martin's rendition of Cline's "He's Got You." The truth is that what we call "country" began as a hodgepodge of musical styles (ragtime, bluegrass, gospel, Western swing, cowboy ballads) and has always tried to paper over its rural roots with a glossy pop sheen. The "countrypolitan" sound pioneered by Chet Atkins in the Fifties and Sixties has long been as integral a component of the music as the "honky-tonk" songs of Haggard, Jones, and Ernest Tubb. Long-haired contemporary outlaws like Travis Tritt, Montgomery Gentry, Sawyer Brown, and Rascal Flatts draw as much from onetime Buddy Holly bassist Waylon Jennings as they do Lynyrd Skynyrd. Even Paul McCartney hit the country charts with "Sally G."

Nowhere is this drama played out more consistently than on the radio. Austin is singularly blessed in that its three country stations cover both sides of the "Murder on Music Row" divide, throwing in a few curves Nashville hasn't thought of yet. According to the spring Arbitron ratings book, Austin is one of only a handful of the Top 50 markets nationwide -- Phoenix, Riverside-San Bernadino in California, Indianapolis, and Greensboro-Winston-Salem, N.C. are the others -- where a country station currently holds the No. 1 position. It's no great revelation to say that country music is as essential a part of local culture as Barton Springs or barbecue.

Any discussion of Austin country radio should naturally start at the top with perennial powerhouse KASE (100.7 FM), which has been at or near No. 1 in the ratings for years. With a playlist heavy on the poppier sounds of Shania Twain, Faith Hill, Lee Ann Womack, and Lonestar, KASE might be seen by some as exactly the kind of radio station singled out by Strait and Jackson for diluting the essence of country music. It's more complicated than that, though; obviously, the station wouldn't top ratings year after year if listeners didn't like its music.

"We research our music very carefully," says Bill Legrand, director of sales/station manager for KASE and its sister stations KVET and "Jammin' Oldies" KFMK. "There's nothing that we play that is by accident. Every song that we play is an established, charted, country hit, and will be tested by our auditory music research."

Legrand says KASE is "basically a Top 40 station that happens to play country music," and that this hits-driven mentality is why the station doesn't play more of the Haggards and Joneses.

"George Jones does not test well with the KASE audience," he says. "But he goes through the ceiling with the KVET audience."

One of Austin's oldest radio stations, KVET (98.1 FM) has long been where Austin listeners tune the dial if they're in the mood for Jones or Haggard, who remain in regular rotation along with Emmylou Harris, Don Williams, Willie Nelson, Conway Twitty, the Judds, Randy Travis, Dwight Yoakam, and a generous portion of the early-Nineties hats. KVET plays new music, too, but it's not emphasized nearly as heavily as on KASE, and then only if it fits the mold of the station's established staples.

"KVET is much more traditional," Legrand explains. "The people who listen expect to hear Garth Brooks and George Strait. They don't particularly expect to hear Shania Twain and the kind of pop-country you hear on KASE."

The wild card in the Austin country-radio hand is also the new kid on the block, Lone Star 93.3. Owned by local media conglomerate LBJ-S (KLBJ, KGSR, 101X), Lone Star came on the air just over two years ago, and at the first of this year tweaked its format to go along with its new "Sounds Like Texas" slogan. Now, Austin artists like Jack Ingram, Charlie Robison, Pete Benz, Kevin Fowler, Chad Austin, Roger Creager, and Pat Green are heard alongside the Dixie Chicks and Tim McGraw, and the station sponsors a weekly local country showcase Tuesdays at the Guadalupe island-themed eatery, Mangos.

"This family of stations has always supported the local scene," says Lone Star program director Chris Knight. "We felt like that would be a nice niche -- 'Sounds Like Texas.' The Lone Star locals that we're playing, these guys live right up the street, so it gives it more of a personal, local feel.

"There's a huge difference between the way our radio station sounds and the way the other stations sound and people appreciate that," insists Knight. "They've been eating vanilla for all these years, and now they've got some sprinkles on their vanilla."

If the Lone Star locals are 93.3's sprinkles, another Texan is easily the meat and potatoes of all three stations' playlists. The same Texan whose albums routinely debut at No. 1 on the Billboard chart and whose Country Music Festival has been among the year's highest-grossing tours since it started in 1996. The same Texan who sang "Murder on Music Row." It's impossible to go an hour without hearing at least one George Strait song on either KASE, KVET, or Lone Star, two if it's one of KASE's "Strait Shots."

With his single "Go On" already climbing the charts and his 19th album -- not counting four greatest-hits records, two Christmas albums, one live record, the Pure Country soundtrack, and the Strait Out of the Box box set due next month -- Strait has established a track record that outlaps even that of his idols. And though Strait is far from old hat, the grandson of one of the holy trinity referenced in "Murder on Music Row" has begun making waves of his own, and could soon begin changing the face of country music, and radio, all over again.

Chris Knight says he's thinking about adding Hank Williams III, who's made it his life's mission to preach the high-octane gospel that "pop-country really sucks," to Lone Star's rotation. If this tattooed hellraiser ever gets loose on the airwaves, the CMA could be in for a much bigger shock than Strait and Jackson's duet.