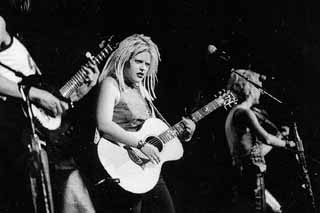 Given the amount of animal-print attire on display at the Erwin Center, Saturday's Dixie Chicks show felt a little like being on safari. It also felt like the eighth circle of hell, after the Dallas trio shooed their all-male backup band offstage and commenced a grueling 10-minute slide show of gap-toothed grins, "mall bangs," and one unfortunate Madonna impersonation. It was Jean Paul Sartre's No Exit reimagined at a suburban Fotomat. The Chicks, whose mega-sales and media omnipresence have so enamored their hometown that there would already be a Dixie Chicks Drive except all three are still alive, have made it their mission to revel in a girl's inalienable right to be as tacky as she wants to be; or rather, as tacky as she can get away with while still snaring a man -- which in Texas can be pretty durn tacky indeed. Bad taste writ large was everywhere, from lead singer Natalie Maines' frightful dreadlock starter kit and fiddler Martie Seidel's oxblood leather pants to the giant pair-of-jeans curtain that unzipped to announce their entrance (this is the Fly tour, after all) and the candy-coated arena-pop that dominated their set. They had a wind machine onstage and were hardly afraid to use it, and hits like "Ready to Run," "There's Your Trouble," and "I Can Love You Better" were so clean (save for the vocal mix) we all might as well have been downloading them from tour sponsor Musiccountry.com. Like anyone not named George Strait who's made a killing in post-Garth Nashville, the Chicks have forsaken the hard-bitten twang of true honky-tonks for slick production values, flashy outfits, and yes, bad haircuts of mall culture. Which would be fine -- lest we forget, country and pop have been intermingling since the Fifties -- if they just didn't try so hard. The gaudy clothes, constant prancing, and sitting on a couch strumming Sheryl Crow's "Strong Enough" all screamed "pop stars," but what stood out even more than their outfits were the brief moments their earthy Texas roots obscured the blinding bleached-blonde divahood: Maines' chicken-fried drawl on twin two-steppers "Hello Mr. Heartache" and "Tonight the Heartache's on Me," Seidel and banjo/dobro picker and local Emily Robison's fret-burning heroics on a corn-fed, Hee Haw-inspired breakdown, and the shit-kicking, hell-raising finale "Sin Wagon." Turning the gospel standard "I'll Fly Away" into a raucous paean to "mattress dancin'" almost got them off the hook for that unspeakable slide show. But not quite.