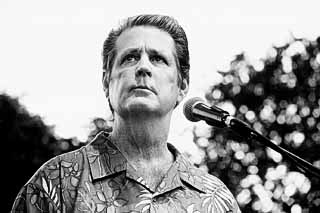 Brian Wilson at the Backyard, July 27 (Photo By John Carrico)

One approaches a living legend's concert with a mixture of love and cynicism, especially when the legend is as famous for mental instability as melody writing. Brian Wilson, also infamous for his inability to tour, walks onstage startlingly on time, as fans -- half hipsters and half Hawaiian-shirted oldsters -- dash to their seats. "Are you happy?" he asks in his childlike voice. "What makes you happy? Rock & roll? A pretty girl?" This seemingly showbiz opening, coupled with the masking of Wilson's initially shaky pitch by the guitarist's vocals, fuels the cynic's hunch that this brilliant and important music will be reduced to geriatric nostalgia theatre. But when Wilson next introduces "California Girls" as "the Beach Boys' biggest song, our national anthem," he relaxes and takes the vocal, and the song feels joyously freed of Mike Love's smarm. Unlike his slithery cousin, Wilson barely moves at all, looking a bit like the Godfather: hair neatly slicked back, flanked by 10 musicians, he sits center-stage, big and round and barely moving beyond double finger snaps and the occasional song pantomime. As his minions, we are supportive almost to the point of obsequiousness: He orders us to stand, we stand; he orders us to sit, we sit. (Controlling as ever, he even directs how to clap: "one-clap-two-clap-one-clap ...") At one point, though, the audience seems to root almost too hard for him. His interstitial banter, which is simple, instructive, and terribly unslick, is greeted with hearty laughter, but after explaining that a song "rocks a little but then gets slow and then rocks a bit more," he responds to the crowd's mirth with a scornful cackle. Perhaps he feels we are patronizing him (and perhaps, in part, we are), but more likely we are simply fanatically giddy. Between the encyclopedic knowledge of the hipster and the life experience of the oldster, his explanations are superfluous. He needn't tell us that Paul McCartney thinks "God Only Knows" is the greatest song ever written, because we know these things like we know our ABCs. Still, we can't get enough insight from him, so we're thrilled to hear "one song that blew me away completely when I heard it in the summer of '64." ("Be My Baby.") As he moves from singles to Surf's Up, the show takes a dark and particularly un-sing-along-y turn. As much as the hipster inside appreciates the move, the Hawaiian-shirted self longs for a few more songs about cars and girls. But without a reprieve, Wilson introduces "a song I wrote in 1963 with my two brothers who both died, so we'll dedicate it to them," and "In My Room" triggers the crying moment, the moment when the beauty of the melody, the tension of the harmony, the solitude of the lyric, and the tragedy of the life collide, and we are frozen, mouths slightly ajar, throats constricted. Thankfully, the band soon takes an intermission and returns to play Pet Sounds in its entirety. Wilson, who, we are reminded, wrote the record at age 23, orders us to "sit back and listen to about 35 to 30 minutes of really good music -- it'll make you feel really good." Of course he's right, but he also makes us feel incredibly anxious. Wilson often writes songs that are too hard to sing, and Pet Sounds brims with them. He flubs some and nails others, even bowing midway through "Caroline No" and "Head on My Shoulder" after hitting particularly high notes. Tonight, though, is not about counting mistakes, but reveling in these masterpieces actually being performed by their master. True, it's painful to see someone who was undone by his inability to achieve perfection now perform so imperfectly, but the inherent love in Wilson's music vanquishes any trace of cynicism one might try to cling to. After two encores of feel-good hits, Wilson wants to leave us "with a nice little message song," and all 11 voices harmonize and send us home with "Love and mercy to you and your friends tonight." And that made us happy.