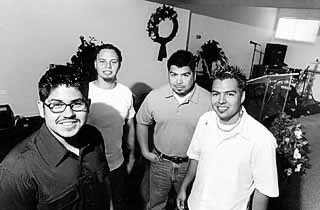 Ask any Austinite to name a great local band and see how long it takes before you hear Salvador's name. Chances are you won't. The five-member rock outfit does not perform downtown, they get absolutely no play on radio, and they've never hung out with the local musicians they love. So how did this group of seemingly sheltered young men land a lucrative record deal with a subsidiary of Epic Records after performing just a handful of shows over the period of one year? The Lord simply chose them to spread his good word, they believe. And with a chance to rock live before one million people -- including the Pope -- in Rome this August, that's certainly reason enough.

Though the confident Mark McGrath look-alike just smiles when asked about the details of Salvador's contract, he is quick to point out that Epic is, after all, the home of cash cows like Michael Jackson and Eric Clapton. It also doesn't hurt that Word Entertainment, their distribution company, is part of an empire that includes a professional sports team and half the state of Oklahoma.

With their self-titled debut album now available in Wal-Marts and Blockbusters across the country, Gonzales believes it's only a matter of time before Salvador, with their bombastic command of funk licks and Caribbean rhythms, inherit the earth.

"We're trying to go worldwide with this because we feel like God has us going out there," says Nick's brother Art, Salvador's drummer. "And as far as sales, we just want to break records. With God behind us, we know we can do it."

Like other record-breaking, five-member groups, the members of Salvador (Nick and Art, cousin Josh, and friends Eliot Torres and Adrian Lopez) seem far too polished and camera-ready to be simple church boys who stumbled upon a

recording career. Their lyrics, too, call for some booty-shakes not terribly unlike their pop counterparts: "Ain't it good to get this praise thing down, so jump around!"

And with Nick's spiky, streaked hair and Banana Republic wardrobe, they almost come across as the Christian Latino world's answer to the flirtatious posturing of current prefab boy bands. Like Menudo with a message, as it were. Once they take the stage, however, all comparisons fade: "We don't hang from strings," says Nick.

Instead, the boys like to think of themselves as bona fide representatives of a legendary Austin music scene. Though they are based in Nashville for commercial reasons, the band was raised in town and continues to live here. They attend services at the King of Glory Pentecostal Church in Northeast Austin, where Nick and Art's parents serve as pastors. They even light up with glee when they talk about Bob Schneider: "He can sing like maybe no other!"

But for all their affinity with the local music scene and their devotion to life in the city, their evolution as musicians has come about rather circuitously. For starters, no one in the band has ever set foot in a club to hear a note of live music.

"We just feel like there's nothing for us there," Nick says. "The aura that's there is not of godliness."

So to get their hit of local music, the devoted Christians have had to watch a lot of Austin City Limits and the Austin Music Network in recent months. They also keep an eye out for shows staged in restaurants and other, more godly, venues. And if God really wants the boys to hear a particularly divine riff, he apparently finds a good way to do it.

"I was in the airport the other day, and I heard Storyville," says Nick. "I was just like, 'Whoa! Malford's screaming over the intercom at an airport. Neat.'"

Besides staying away from much of the live music in town, the boys also turn a deaf ear to most mainstream tunes on the radio, preferring to distance themselves from what they deem 'secular.' With such self-imposed isolation from differing forms of rock and pop, it seems almost miraculous that their debut album displays true musicianship, from Nick's sturdy, self-assured voice to the bold arrangements of their hyper brass section.

True, they received some help in composing their material from producers and writers, but the most infectious tracks on the album are credited to the boys themselves. Seriously, they promise, the rhythm is gonna get you.

So without much direct exposure to rock to speak of, the band's real musical education is based largely on jam sessions they held at church as young boys. Every Sunday before services, churchgoers at King of Glory are treated to a rousing style of music. This "praise and worship" music, as it's called, serves as a call to wake people up on sleepy mornings, build unity among the church, and, one supposes, get your groove on for God.

"It's almost like the old campfire thing," Nick explains. "Like singing 'Kumbayah' and whatever you sing at camp. The same motives that go into having campfire songs are the same motives in worship and church. It brings unity, it brings honor and glory to God."

While they've been exposed to this music their whole lives, it wasn't until one fateful morning eight years ago that Nick and Art finally got their chance to take the King of Glory stage for the first time. The man with the acoustic guitar who normally belted out the praise and worship songs before services mysteriously did not show up, and Art had a clever idea.

"I dared Nick that if he played guitar, I would play drums, so we became a two-piece praise and worship band," he recalls. The results, he admits, were "pretty bad," but with time, practice, and new members, the boys would only get better.

Eventually adding Josh on bass, Eliot on percussion, and Adrian on keyboards, Salvador was finally ready to rock. When they played a gospel festival in Luckenbach just months into their stint as a fully formed band, Nashville-based manager Michael Smith heard their raw potential and instantly took them under his wings. In only two weeks, the band signed to Epic's Christian imprint, Myrrh Records.

With that message in mind, Salvador immediately went on tour and performed before a total of over half a million people before their record was even released.

"And that's a million eyeballs, which is a lot, dude," Nick jokes.

While they remained virtually unknown in their hometown, the Salvador boys were taking it to the road and playing in every major city you can think of, from Sacramento to Nashville. In a display of their youthful zeal and ambition, Art exclaims "We even played next door to the Staples Center in L.A.!"

The band is currently gearing up for more dates and is looking for a road manager and brass section to tote along. Though they could scour the country for men to fill these roles, they insist on keeping their ties to Austin and its music sincere.

"I think that Austin is the place where He is at," says Nick, emphasizing the 'He.' True to their mission, Salvador intends to remain Christian and male. "He. He. Boys. Dudes. Men. Dudes," Nick says as he discusses the chances of newcomers joining them on tour.

In August, their tour will make its way to Rome, where the band will perform as part of World Youth Day, an event that is expected to gather more than a million young people in the streets of the Eternal City for a spiritual festival. The significance of such an audience is not lost on the band.

"Metallica and the Rolling Stones have been at it for many years and have never played for that many people at once," notes Nick. "What an awesome opportunity -- the Pope's going to be there. Maybe he'll play a little harmonica with us."

After the tour ends and the boys return to their humble church, they hope to use their influence and cash flow to make a big difference in the lives of their peers.

"We want to be on staff at our parents' church, build up the church," says Art.

The Salvador members already tithe to the church, support its missionaries, and are looking to contribute to charity. But somewhere along the line, they'd also like to gain the respect of the local music establishment.

"I wish we knew some people [in the Austin scene]," Nick says. "But we're fans. We don't play in the same circuit. But I really think that with the quality of music that we have put upon ourselves, we could play at the same spots. We're not Christian music like everyone thinks -- we're actually players."

And while Nick jokingly describes his band as "Christian music -- be very afraid," he has clearly no doubt these players will be preaching their grooves to the converted massive.