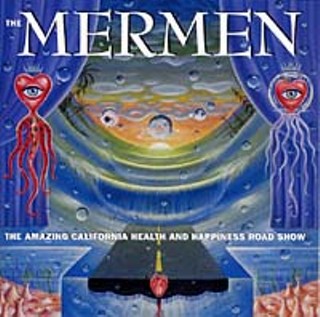 Jim Thomas is a musical savant. He might not be good at a lot of things, but the sounds he hears in his head, and his ability to capture them on tape, are genius. Picking up the guitar relatively late in life, Thomas was and is a water baby; spent his whole life by the water, and the surf music he has come to play as an adult sounds quite unlike any other of the genre. On the S.F.-based trio's third full-length, its first since 1995's A Glorious Lethal Euphoria, the Half Moon Bay surfer sounds like he's grown gills: This music is water. Opener "Unto the Resplendant" is typical Mermen, a charging rock instrumental in the tradition of Pink Floyd and Jimi Hendrix (the group's moniker is taken from Electric Ladyland). "White Trash Raga" follows exactly as titled, but when Thomas lays into Wes Montgomery on the dreamy, shimmering "Merry Go Round," the pull of the deep blue dragging you down to the bottom of the ocean to have your faith tested by Mermaids, it's all over. From that point on, The Amazing California Health and Happiness Show alternates pounding uptempo breakers like "Miki's Lush Beehive" and "Emmylou Rides Clarence West and Then South" (Clarence White anyone?) with mesmerizing tide pools like "Walking the Peach," "Bare White," and the naturally romantic but enigmatic "To Be Naked and French Is Always Hard," the pedal steel and acoustic guitar like water lapping at your toes. This is surf music borne of the brine, not of Brian Wilson's bedroom. Like they say, nothing ventured, nothing gained ...