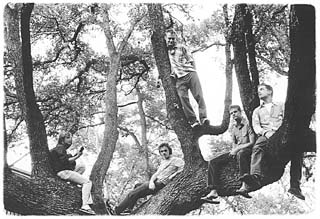 Getting the members of Austin's Li'l Cap'n Travis to talk about their band is a chore. Not that the subject came up much over brunch at El Sol y la Luna and a couple hours of afternoon lounging at two band members' South Congress digs. When it did, things got off topic almost without fail. Actually, the first time, they never got the chance to get on topic, as some of the kids tried for a creative way around the problem. "Is there a form we can fill out?" wondered bassist Jeff Johnston. "Can we do it that way?"

Guitarist and primary singer Christian Braflaadt had ideas of his own.

"Instead of having it all question-and-answer, maybe we could express ourselves with fingerpainting."

Other suggestions included haikus and macaroni sculptures. On the occasions they finally get around to talking about Li'l Cap'n Travis, things get askance with regularity. Underneath guitarist Matt Kinsey's comments that the band tries to play country music without knowing the licks ("which is good because we really don't want to re-enact much of anything"), Johnston sits enunciating the words "Buck Owens" with trance-like regularity.

After about the fifth utterance of the country legend's name, drummer Mandon Maloney jars Johnston from his catatonic stupor by commenting that he once saw Kenny Rogers on the same bill with comedian (and that term is used with the loosest denotation possible here) Gallagher and Seventies monolith Neil Diamond. It only makes sense that someone would then ask about the first few rows of seating at the show.

"So, were all of those people listening to Neil Diamond with chunks of watermelon on their faces?" wonders Kinsey.

Maloney replies that he doesn't know because he only remembers Gallagher "telling about 10 bear-shitting-in-the-woods jokes."

This subject prompts Braflaadt to break into the chorus of Rogers' "Love Will Turn It Around" at just under normal speaking-voice volume. Since the room goes dead quiet at precisely that moment, it's clearly audible to everyone.

"Of course I don't think Six Pack was out at that time," notes Braflaadt, referring to Rogers' 1982 cinematic debut concerning a stock car driver and the six orphans he inherits. "Remember it had that kid that had the stethoscope -- the engine kid? The older guys would be like, 'What the hell did that kid do?' And he couldn't even drive, but he could sure fix an engine."

"It was pretty much the same as The Mighty Ducks,"explains Maloney. "A bunch of outcast kids who are rough around the edges, but had some car-fixing skills."

With that, cousins Braflaadt and Maloney -- their mothers are twins, who under the name of the Dixie Dice Darlins do a dynamite dance routine to the tune of "Winter Wonderland" and that tune only -- might have unwittingly hit upon a perfect description for Li'l Cap'n Travis. Except for the part about the car-fixing skills.

Maybe it's those rural, Neil Young strolling geetars crossed with occasional Beach Boys harmonies that have been put on a codeine IV. That and a cinematic description that goes something like, "The drunken remorse of Paul Westerberg told with Merle Haggard's folksy phrases."

In fact, the band was born only out of Kinsey's need to record some things he had been doing on 4-track. He called Maloney to play drums, then Braflaadt came on board, and he and Kinsey started writing. Eventually they put down about 20 songs. People who heard them thought they were good enough to play in front of other people.

The trio then booked some time at a Sears portrait studio to get some fantastically schmaltzy glamour shots of themselves, and more importantly, recruited Johnston to play bass. Since Earthpig had helped out on a couple of the 4-track dinkings, he was a natural to fill out the lineup, that is until he moved to New York City. In steps Sweet Gary Newcombe and ... Ta-da!

After that, the whole endeavor went from being "help" to being a "band," even though things didn't get serious at all for quite a while. Braflaadt estimates that they had all of three rehearsals before the first gig, and for the rest of the first year of its existence, Li'l Cap'n Travis averaged about one additional rehearsal per every three to four shows. That goes hand in hand with the palpable lethargy that seems to pervade everything about this band. Heck, the most animated they got all afternoon was reliving their first experience with the Leif Garrett episode of VH1's Behind the Music.

"That was fucking crazy," blurts Kinsey as Maloney jumps into his imitation of Garrett's crippled buddy. "I mean, they've got Garth Algar in a wheelchair. It was horrible."

"That was the most frightened I've ever been about television," swears Braflaadt.

Despite the fact that the indolence might very well be a fact of the matter with Li'l Cap'n Travis ("There's only a certain amount of polish we're capable of," notes Kinsey. "It's never going to be too slick."), the second most animated anybody in the room gets is when it's suggested this is all just a joke to them.

"It's definitely not a joke," states Braflaadt.

"What's the difference between a joke and having a good time?" he asks. "You tell me."

Can't. But I can tell you that the same guy in the Buck Owens trance can also name all the members of Nazareth. And I can tell you that as Gravitron, the electro-futuro-two-turntables-and-a-microphone Li'l Cap'n Travis alter ego, the band made a shameless grab for some cash and won a Celis jingle contest, where they then had to turn that one minute of material into a 30-minute set.

I can tell you that none of them are buying into the myth that the common musician is being driven from Austin due to the rising rents in the local housing market, because as Maloney puts it, "Where else are you going to live?" or as Braflaadt explains, "Heck, I grew up in Amarillo!" However, they do ask that all of the newcomers stay up in South Dallas (i.e. north of Rundberg). Most importantly, I can tell you that while Li'l Cap'n Travis might not be a joke, they never pass up an opportunity to make one.

Maybe it's not a chore getting the band to talk about itself, but rather a bore. Almost everything they say about other stuff is far more amusing than what they might say about themselves. And honestly, who wants to read, "Well we met in school and discovered we both liked Captain Beefheart and so we thought we'd start a band," or "My influences are Radish and the C+C Music Factory" when you can read nonscripted exchanges like the following?

Jeff Johnston: "I saw the bass player for Triumph on Wheel of Fortune a couple of years ago. And it wasn't a celebrity show or anything. I was at my dad's house around Christmas Eve or something and he's got this huge TV and Wheel of Fortune is on. And I see this guy and he kind of looks familiar -- long hair and moustache. Then he said, 'I'm Bob from Canada' or whatever his name was, I forgot. But they asked the question when you talk and he said he was in a band from Canada called Triumph."

Mandon Maloney: "But he fought the good fight."

What's important here is not the joke itself, but that everyone in the room laughed at it. That's an even more perfect illustration as to what Li'l Cap'n Travis is all about. Sure, that "rough around the edges" and "whole lot of heart" crap still applies, but much of the band's charm is also in the ability for one guy to pull out a tidbit from his reservoir of knowledge about, say, Canadian power trios, at the perfect time and know that the other four guys in the band are going to get the joke. And if they bothered to work back from that joke to a general principle, they could make it their motto: Being smart doesn't mean you have to be serious.

And so what if they aren't as tight as Rush?