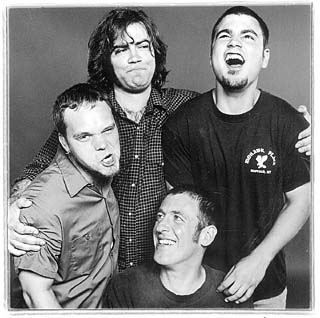 It's Saturday night at the Hole in the Wall, and the pool-room side of the bar is about as comfortable as a Turkish bath. A thick nebula of blue-gray cigarette smoke hangs in the air, as heavy and acrid as the exhaust from a Pinto with blown piston rings. Slobberbone's Brent Best slouches behind the mike, looking a little drunk, a little tired -- like that Guild guitar weighs 50 pounds and he's already on the hangover side of a gullet full of bourbon. Guitarist Jess Barr lays down fluid, squiggly guitar lines, embroidering the song's melody without resorting to hackneyed, hair-in-the-breeze, flap-yer-flares guitar heroics, all the while nonchalantly dangling a cigarette from his lips. Bass player Brian Lane and drummer Tony Harper keep the rhythm in lockstep, Lane looking about eight feet tall, all legs and arms, occasionally mugging for the crowd. The crowd is in Slobberbone's sweaty grasp, many die-hards' lips matching Best's word for word on "Barrel Chested."

I'm broken down and barrel chested again. Some people try for all their lives, but they never make a dent. You hang around bored, broke, and restless again. Strung out, stripped of all your pride, with all your money spent

It's been a long road from the band's early days in Denton to this particular Hole in the Wall gig: three CDs, endless hours in a van, too many motel rooms to count, and night after night of staying up until the birdies outside begin their infernal twitter and most other folks are sipping coffee.

For those used to Austin's glut of bands, clubs, and gigs, Denton's music scene presents quite a different picture. Being a smallish college town, Denton denizens are accustomed to more of a DIY, seat-of-the-pants ethos for bands, with house parties, rented-hall shows, and restaurants clearing out the tables for live music and a small, shifting list of clubs ô la Champaign, Ill., or Fayetteville, Ark.

In the late Eighties and early Nineties, the Dallas suburb's tight little music scene was identified more with spacey, jam-oriented bands, white-boy funk (thanks to North Texas State University's widely acclaimed jazz program), and noisy hardcore bands like Brutal Juice. It was out of this scene, in 1992, that the first hints of Slobberbone -- slang for a dog-gnawed chew toy -- began to take shape.

"It was this kind of loud, straight-ahead guitar band, and it was right about the time that grunge exploded on the radio, which kind of ruined things," recalls Best of the pre-Slobberbone days and his affiliation with Gravel Truck. "I mean, anyone who was in a loud guitar band then just got associated with that shit ..."

"We'll be out in the middle of South Dakota or somewhere and we'll pass a Holiday Inn, and Brian will say, 'Yeah, I remember playing that place,'" laughs Best.

By 1995, the band's first release, Crow Pot Pie, was in the can. Originally put together as a test balloon to help the band get regional gigs, it caught the ear of Jeff Cole at Austin indie Doolittle Records. A re-recorded version of the 11-song CD was assembled for Doolittle with Cole holding down production chores, and almost immediately began to draw critical acclaim.

Songs like "Stumblin'," "Whiskey Glass Eye," and "I Can Tell Your Love Is Waning" found Slobberbone summing up the finer points of regret, self-disgust, and down-and-out loserdom with laser-beam accuracy, always leavened by Best's dark sense of humor. Coming along at the height of the insurgent country movement, Crow Pot Pie was obviously country-influenced, but far more fierce and turbulent than the faux-hayseed sounds of many of the band's contemporaries; bludgeoning layers of guitar take the place of delicate Telecaster twangs and mandolin melody lines. Publications like No Depression and CMJ were soon singing the band's praises, and the wheels were rolling.

The next year saw the band's second release, Barrel Chested, come out on Doolittle. Far from a sophomore slump, the CD was 11 more desperate tales of dead-enders that could be taken from the pages of a Jim Thompson novel. "Billy Prichard," "Little Drunk Fists," and "Lame" are bitter little nuggets of life from the substrata of the country where tornadoes rip swaths through trailer parks and bored small-towners circle their pickups, build trash-can fires, and guzzle cases of cheap beer for lack of anything better to do.

On Barrel Chested, the band's musical direction began to inch away from the high-octane hoedown arrangements of Crow Pot Pie, the second LP having much more in common with progenitors like Crazy Horse and Lynyrd Skynyrd than Hank Williams or Lefty Frizzell. With Cole producing once again, at Austin's Arlyn Studios this time, pedal-steel gunslinger Lloyd Maines also sat in, as did ex-Poi Dogger Susan Voelz for the occasional fiddle solo. A notable change was the departure of guitarist Mike Hill. Though Hill contributed a few Barrel Chested guitar solos, Best recalls the philosophical differences that arose.

"He had this idea of 'craftsmanshipí' as a player, which I'm not totally down on, but especially for a rock band, just give the song what it needs, and nine times out of 10 it's not gonna need all that much," he says. "It was a bit of a rub with us. With Barrel Chested, we had really considered just keeping it a trio, but we did need the extra sonic dimension of having two guitar players."

There's some water under the bridge between Barrel Chested and the recent debut of Everything You Thought Was Right Was Wrong Today. Doolittle, for one, more or less disappeared, merging with New West Records -- no surprise to the band, who foresaw Jeff Cole's departure well in advance. Guitarist Jess Barr was shanghaied into the band, plucked from college in Austin to serve as the Bone's No. 1 guitarslinger and banjo picker. And, of course, the usual regimen of 200-plus gigs a year, endless miles of interstate driving, van windshields framing the world, and the inevitable dread of those damnable birds at sunup.

Again, there is a notable difference between Everything ... and Barrel Chested: For the new LP, Slobberbone made a pilgrimage to Memphis' Ardent Studios, where they hooked up with producer Jim Dickinson, legendary veteran of sessions with Big Star and the Replacements and sire to two-thirds of the North Mississippi Allstars. That, perhaps, explains a nod to the Replacements on "Placemat Blues," a bar-band rave-up that splits the difference between chaotic punk energy and roots-rock rectitude.

Lyrically, Best continues his penchant for booze-fueled self-reproach and snapshots of rundown one-horse-town fuckups. Musically, all-out rockers like "That Is All" are offset by the 12-string and fiddle of "Meltdown" or the pensive "Josephine," a sketch worthy of Southern wordsmith Flannery O'Connor. Kindred spirit and fellow rock ne'er-do-well Patterson Hood of Georgia's Drive-By Truckers guests on "Lazy Guy," his sandpapery vocals complementing the song beautifully. The result is a fully realized album that follows through on the band's "Remember to rock" exhortation.

As the band moves further from an alt.country movement showing signs of rigor mortis, Best conveys his discomfort at being pigeonholed into a hopper already plenty crowded.

"All of a sudden, it became a 'thing,' but there were always bands that were doing that," he says. "The Long Ryders, Green On Red, stuff like that. Now, to come along 15, 20 years later and it's a 'movement' is kinda ridiculous. Another negative byproduct of this rush to make it a 'thing' is the fact that if you build a bandwagon, people are going to jump on it.

"It's too bad, too, because it seems like there's been a concerted effort with fans, writers, and bands to ruin it," continues Best. "Not deliberately, mind you, but when everyone just wants to be associated with it, it begins to drag it down, and then a couple of years later when a band makes a purposeful move away from that sound and everyone gets all up in arms about it, I mean, it doesn't make any sense. If you genuinely like the band, the songwriting, and the sound, then why should it bug you when they try to do something different?"

Why indeed. The band's sound and approach may have changed somewhat over the years, with a big-rock sound coming more to the foreground, but Slobberbone's (and Best's) outlook hasn't deviated much. It's the world-view of a battered, worse-for-wear romantic who still sees humor and a glimmer of hope through his (largely self-inflicted) pain. There's a light at the end of the tunnel that hopefully isn't a goon shining a Mag-Lite as bait, waiting to thump the poor sap over the head with it.

Crow Pot Pie's "I Can Tell Your Love Is Waning" is a disturbing yarn of murder in the bathroom of a mobile home, but it offers this flicker of redemption at the end: "I think if we can just get by these foul moods we're in, we can drive on down the highway with all our windows open once again."