Straight Out the Trailer 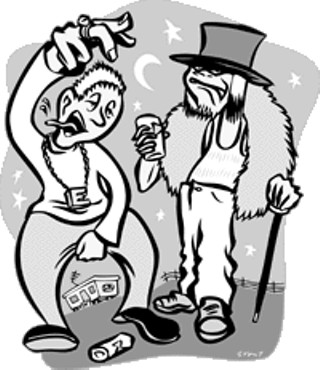 "Slim Shady does not give a fuck what you think ... Upon purchasing this album, you have just kissed his ass."

-- from the introduction to Eminem's The Marshall Mathers LP (Interscope, 2000)

Around the time Eminem's The Marshall Mathers LP debuted at No. 1 on the Billboard album chart, a small group of young Austinites met for drinks at the Dog & Duck Pub: two Chronicle writers, a UT Informal Classes photography instructor, and two attorneys. One of the attorneys excitedly passed around an invitation to an upcoming Fourth of July "white trash" party. The size of a greeting card, the invitation depicted a stereotypical Dogpatch couple modeling appropriate party attire: bare feet, wife beater, battered straw cowboy hat, Daisy Dukes, and blacked-out teeth. Naturally, the woman was pregnant. This particular white trash party, the attorney explained, was vegetarian. Grilled tofu and garden burgers, not saltines and potted meat. Vegetarian! Called on the carpet, she tried to rescue her trailer-park credibility by mentioning the party's beverage of choice would be Lone Star tallboys. Nice try, but even Lone Star is a bit too brew-pubby for a true trailer-park throwdown -- Pearl, Beast, or PBR in a 12-ounce can is more like it. Actually, most motor-court inhabitants drink Budweiser just like the rest of America. So, if there must be tallboys, it's gotta be Busch. Head for the mountains, baby. Vegetarian! Somewhere, David Allan Coe just spat out a whole mouthful of Jim Beam.

It was obvious she thought the idea of a bunch of salaried, educated professionals sitting around in cutoffs and tank tops, scratching themselves while swilling low-rent libations and affecting third-rate Dukes of Hazzard accents, was cute. Yet she wouldn't dream of attending one of those "jungle" fraternity parties where blackface and loincloths are required evening wear, even though the only difference between one of those and this particular July 4 shindig was the color of those being insulted. Never mind that Fourth of July parties wouldn't exist without the Declaration of Independence, drafted to stamp out this very kind of elitism; just try to imagine residents of your average trailer park having a white-wine-and-brie "yuppie party." In truth, that would probably be a lot more fun.

The only reason white trash parties exist is that "white trash," while just as offensive an epithet as "nigger," "spic," "hebe," or "faggot," describes possibly the last social classification it's perfectly acceptable to ridicule publicly. Commonly used as shorthand for the spectrum spanning "ignorant" to "slovenly" to "Southern," "white trash" is a convenient way to describe all three. Yankee snarkmeisters Jay Leno, Dennis Miller, and Bill Maher have been having a field day ever since Bill Clinton was elected.

But isn't making fun of someone for their income level, lack of education, sexual activity, or religious beliefs just as wrongheaded as the homophobic slurs throughout Eminem's album? Especially in today's hypersensitive social climate of unchecked political correctness, it would seem so. No, there must be another reason. Try this one on for size: envy. As the third millennium A.D. dawns, the dominant force in pop culture comes, like Kid Rock says on "Cowboy," "straight out the trailer." And it shows no signs of subsiding.

It's impossible to turn on the TV or radio without immediately encountering this new lowbrow chic, which has cultural tastemakers alternately quaking in their Kenneth Coles and clamoring to make a buck off it. Eminem's The Marshall Mathers LP instantly blew megasellers by Britney and N'Sync out of the water upon its June release and remains at No. 1 as of this writing. Kid Rock's Devil Without a Cause, originally released in 1998, has gone platinum several times over (fulfilling the prophecy of the title track); his recently released odds 'n' sods compilation, The History of Rock, has been comfortably ensconced in the Top 10 for weeks.

Jerry Springer, NASCAR, and the World Wrestling Federation routinely crush their TV competition. And the three hottest prime-time show of the past year? ABC's Who Wants to Be a Millionaire, demonstrating that one hardly needs a Harvard degree to hit the trivia big-time; HBO's The Sopranos, with many a scene set in the Bada Bing! strip club; and CBS's Survivor, with its soap-opera-level squabbles and petty bickering played out for huge ratings in the South China Sea. Good thing William F. Buckley Jr. retired last year -- all this would be more than enough to make him choke on one of those five-syllable words of his.

Even in the usually stodgy publishing world, memoirs by professional wrestlers The Rock and Mankind have been as ubiquitous on the New York Times bestseller list as J.K. Rowling's Harry Potter series. In the July 5 issue of the Village Voice, Chuck Eddy contributes a lengthy essay on the Kid Rock/Eminem phenomenon titled "Motor Suburb Madness." Eddy, whom no one will ever confuse with more scholastically minded rock writers like Robert Christgau or Greil Marcus, spends most of the piece riffing extensively on Rock and Eminem's lyrics before arriving at the conclusion that "white kids who hate school need something empowering to call their own." And MTV needs something naughty to balance out the saccharin glut of Jessica Simpsons and BB Maks, at least until Britney and Justin's post-divorce solo albums come out.

Surprisingly, but maybe not, the most fascinating (or perhaps repulsive) recorded example of the current crotch-grabbing explosion comes not from the Detroit duo but from the same town that gave the world Townes Van Zandt, Lou Ann Barton, and Ornette Coleman. On Southern Devils (Tommy Boy), Fort Worth's Pimpadelic ventures way, way beyond the panty-strewn pale. On opener "Caught It From Me," doubtless the only ode to gonorrhea to come out this year, rapper Easy Jesus the Pimp brags he's "eatin' up your girl like tooth decay," and he's just getting started. The melancholy "Vegas" -- think a more graphic, less repentant version of Rock's "Only God Knows Why" -- finds him contemplating suicide and "stuck-together porn pages" while drowning in alcohol and slipping in a subtle stab at Erykah Badu's "Tyrone."

Easy spends most of Southern Devils pimpin' hos and flipping off playa-haters to a backdrop that suggests AC/DC hiring themselves out as N.W.A.'s backing band. But he's also self-aware, confessing on "My Style" that "I'm a dirtbag and I still get fine chicks ... It makes me feel great to abuse chicks, smell like hell, and drink Mad Dog. That's what my life revolves around." Then he hawks a loogie. Must be a family tradition; this pimp's uncle is original "Long Haired Redneck" David Allan Coe, who of late has been co-writing with none other than Kid Rock.

Southern Devils contains a snippet of dialogue where one black woman describes a demonic voodoo porno scene to another, and her conclusion fits the band, and the times, perfectly: "I ain't fuckin' with them white boys." Considering Columbine and Jasper, this is definitely not the time to fuck with white boys -- or factoring in the recent wilding shenanigans in Central Park, with any boys. When even super-feminist Susan Faludi devotes her latest book to the beleaguered state of American manhood, is it any wonder guys are eating up the WWF, Limp Bizkit, and magazines such as Maxim and Gear like pork rinds? Today's newsstands, pop charts, and airwaves are certainly providing a wealth of material for some enterprising future feminist studies professor, that's for sure.

Racial studies instructors will have a much tougher row to hoe, so to speak. On one hand, this is just a fresh repetition of an old pattern, with hip-hop standing in for blues or jazz as the black music du jour being co-opted by the white majority. On the other hand, there is no white majority anymore, in music or anywhere else. While it's easy to cite that fact as the prime reason artists like Pimpadelic, Kid Rock, and Eminem are all mad as hell and not going to take it anymore, the reality is much more convoluted. All three acts are openly genuflecting toward their African-American influences. In at least two instances, the love is reciprocated: Eminem has no bigger fan than his producer/mentor Dr. Dre, and Rock has gotten props from hip-hop elders ranging from Run-DMC to Ice Cube. Last month, Eminem was the first Caucasian to make the cover of rap bible The Source in the magazine's decade-plus history. Eddy's essay is astute enough to point out that the real issue here is class, not race; in his book Rock This!, latter-day Richard Pryor, Chris Rock, agrees: "Black people have more in common with white people than they do with rich people."

Here's a question worthy of Who Wants to Be a Millionaire: Why do kids mow down their classmates with AK-47s? Easy: Because they hate their lives. That's my final answer, Regis, and for godssakes can't you wear a shirt and tie that aren't the same color? Any man over the age of 18, and more than a few under, can tell you how depressing and demoralizing it really is to go to a strip club. That may be the real secret to the present popularity of all this hesher hubbub: It provides vicarious thrills and creates a living-room-safe layer of insulation between its consumers and their frequently hostile (or at least disdainful) surroundings. Of course, this may be overanalyzing things just a tad. Kid Rock sums it up much more succinctly in "Cowboy" when he says, "My only words of wisdom are 'Suck my dick!'" The most enduring characteristic of real white trash is, for better or worse, to just not give a fuck.

Like Kid Rock, Christopher Gray has been known to wear a wifebeater in public. Anyone who has a problem with that can go radio-edit themselves.