Chrysta Bell quits the Souvenirs; the Meat Puppets' new record could come out in record time. 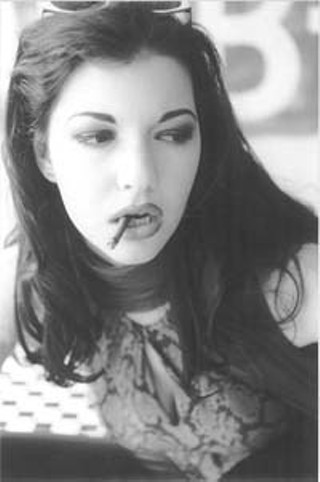 Fans of 8 1/2 Souvenirs, get ready to say goodbye -- and hello! -- to vocalist Chrysta Bell. The lovely local belle says she's "honored and blessed" to have been involved with the band for three and a half years providing the voice to accompany the fine players of the local swing sensation. It's just that she's 22 years old now, and looking back, she realizes "that's a large chunk of my life!" She's not leaving because of anything negative, she stresses. "It's just time to find out more about myself outside of the band." In fact, she discovered a few things recently when she visited director David Lynch in L.A. Lynch had her in his studio adding vocals to a track he had written, and liked the results enough to begin writing more material for her to sing. Unfortunately, Bell's being in a band with contracts and such was an obstacle to the project, as well as other non-Souvenir endeavors. After an official final show with the band at Antone's July 28 (which will doubtless not be the last time she shares a stage with the other Souvs), Bell will be free to follow whatever path she chooses, and she's already looking forward to her first solo headlining gig, possibly by the end of August, as well as further jaunts to the West Coast. She's not committing to a permanent move at this point, though she's certainly feeling the lure of sunny California. "I've never told myself I was moving to California," she says, "but from conversations I have with people, that seems to be the impression they come away with." That impression may be partially brought about by the fact that Bell's got a manager out West who's currently trying to line up lucrative work for her there. That and the joy with which she recounts the "spark" she felt working with Lynch.

So what's to become of the Souvs without their charming frontwoman? Well, they won't be calling on previous vocalist Juliana Sheffield -- she just moved out to Cali herself. And while her predecessor, original Souvs singer Kathy Kiser, filled in recently for Chrysta Bell when the latter had to tend to a family tragedy, founding member Olivier Giraud says the band "might, might not" seek a permanent replacement for Bell. Currently, the Souvs are evolving anyway, with part-time conga player Chachi becoming a full-fledged member of the band, and plenty of new music waiting to be worked into the repertoire. "I'd like to keep the feminine tone in there," Olivier says, noting that a female who can sing and play an instrument would be a "perfect" addition to the band. For now, the Souvs are preparing for a Central Market gig on September 14, which will mostly feature Bell, and work on one of the Alamo Drafthouse Cinema's series of silent films with live accompaniment (possibly René Clair's The Italian Straw Hat). When all is said and done, Olivier concludes, "We'll do something that will make us happy."

It looks like Atlantic Records subsidiary Breaking Records is going for some sort of speed record with the Meat Puppets' first disc for the label; with most large labels taking forever to put out anything, Breaking says that the new Puppets release is coming September 26, a mere two months from now. "We just did a deal," says Meat manager Tammi Blevins, "and we're already behind!" The album is of course done, but the artwork and whatnot are still heading toward production. Whether the band does a local CD release depends on if they're in town at the right time or not. Right now they're looking at the possibility of hooking up with either the Stone Temple Pilots or Red Hot Chili Peppers for a tour. Nothing's set in stone, but a reporter from SPIN, who was in town last week interviewing the band, says Flea is a huge fan...

Oddest combination of the week has to be Dino Lee, Glenn Benavides, Glamourpuss' Philip Plyler (who weds Miss Darlene of Quick Drawl Saturday), and possibly Stephen Doster, who are cooking up a combo called Groovy New Days (as opposed to the "Good Old Days"). The band won't be playing any gigs until the project is fully baked, but Lee, aka Mr. Fabulous, tells me it will be imbued with "Mod sensibilities." Meanwhile, he'll continue doing the Mr. Fab thing (Sundays at Speakeasy and this Saturday at Cedar Street) while working on opening his own bar with Steve Ricci, a Tiki lounge called Ocean's Eleven (named, naturally, after the Rat Pack cinema classic) at 720 Red River. There'll be occasional live music, says Lee, but mostly the place is to be a "waystation" for musicians and neo-Rat Packers in the middle of all the music venues in the surrounding area (like Casino el Camino when there was still music on Sixth Street). Look for the doors to open in early September. Hey, is Matt Helm's car still in town? That would make a great delivery vehicle!

"I've been both busy and lazy at the same time, which is not a good combo." So says King Coffey of the Butthole Surfers, finally returning my e-mail of several weeks ago. At that time, I reported what the band's current label, Surfdog Records, had told me about the release of the band's next album, which has been in limbo since an abortive attempt at release by Capitol Records in early 1998. Coffey gives a bit more detail: "We spent about three weeks last month remixing some of the Capitol stuff, [and] that'll probably form the core of the album. We also have a couple of songs that we recorded when Capitol was holding us hostage that will probably end up on the album. We're also talking about going back in the studio to record some new songs to finish off the album, but no date is set yet. As to when it will come out, I can honestly say, 'I don't know.'"

'Tis the week for many happy returns: Along with Agony Column's reunion (see Music Listings), the local boys who got a nice settlement from that UK band to use the name "Gomez" are back, playing Friday at Room 710 with Dead End Cruisers and Brewtality, Inc., under the name The Great American Gomez (I would have suggested "No-Mo'mez" or "Zemog the Irreversible"). Chepo Peña says the band will have copies of their unreleased Scooch Pooch album along with them. "Think of it as the Star Wars special edition of punk, except with cooler new stuff." Another local band featuring Peña (are there any left that don't?), the Sexy Finger Champs, have been accepted into the MIX2000 Digital music fest In Japan. "Now," he exclaims, "we need to raise the goddamn money!" (To get there, that is.) I don't suppose there's a hot new band in England that needs to buy the name "Sexy Finger Champs"?... ST 37 have started recording their next Emperor Jones release now that Dave Cameron is back from the big 3 Day Stubble Japanese tour, where he got to share the stage with the Boredoms, Ex-Girl, etc.... The TV show is on hiatus, but you can hear Dynamite Hack guesting on radio's Loveline on 101X Monday night, and that's not the only place their original material is showing up. With 135,000 albums sold (a lot for an Austin act), they've got a tune scheduled to appear on the soundtrack to the Digimon movie, another on an upcoming Playstation snowboarding game, and they're hoping that their second single "Anyway" will get airplay on a radio station near you when it's released the last week in August. The Hack also got some reasonably positive press in the latest SPIN (Eminem cover), though Goudie's writeup in the same issue was somewhat iffy; Johnny Goudie is described therein as "an androgynous tease fronting an art-glam band" who "must be tough if he played this stuff in shit-kicking Texas." Hell, just showing up at the Hole in the Wall with all those effects pedals takes some balls... Richard Luckett of Antone's seems to be living up to the "luck" part of his name lately. He recently signed a deal with jazzman Chet Baker's widow that grants him the "one and only merchandising license" for Baker's image. What's so lucky about that? Well, as soon as the ink dried on that particular document, Hollywood prettyboy Leonardo DiCaprio signed on to make a major biopic on Baker, making Luckett's deal potentially as good as getting royalties every time someone says the word "Titanic." Now, let's hope his luck holds out regarding a deal for a set of acoustic shows by a certain legendary performer, which is in the works for Antone's... Phish fans got their wish this week as the Vermont hippies came down to shoot an Austin City Limits episode -- a very atypical one for the series, with people standing up, tripping out, and -- sniff -- toking out as well. The band played for around two hours, including some signature jamming, with an hour of the set due to be culled for the show when it airs later in the season. And no, they didn't do "Gin and Juice"... Turnabout is fair play, so look for a Texas act to appear live on TV from New England August 14. Live by Request, the A&E Network series that touts itself as "the only live interactive music show on television, radio, and the Internet," will present a two-hour show that evening, split evenly into a pair of sets by Willie Nelson, one with the Family and one with the Blues Band. The Blues Band will be showcasing material from their upcoming Island Records release, Milk Cow Blues, with several guest stars from the album playing the show as well. Those include Francine Reed, Kenny Wayne Shepherd, Dr. John, and, most likely, B.B. King. As far as the Family's set, the program's gimmick is that artists take viewer requests via telephone and the Web throughout the live broadcast. Wanna bet they'll do "On the Road Again"?... The folks at Bull McCabe's probably won't have a day like last Thursday for quite a while. With only half an hour or so to get over the thrill of having Anthrax in the bar, in strolled William Shatner and a lady friend. It's a shame the two parties didn't meet; Anthrax are known to be rabid fans of the Tube Bar Tapes, so it's a good bet they're aficionados of Shatner's legendary Transformed Man album as well. Of course, I'm not sure how well Anthrax's songs would work as Priceline commercials... Finally, with the legendary Spinal Tap reuniting to coincide with the re-release of the classic documentary about the band, it's necessary that the band find a new drummer, so they've set up an essay contest at Listen.com to help them choose. Naturally, the winner won't actually be allowed to perform with the band (given their history of drummer problems, it would be too dangerous), so anyone can enter regardless of talent. The band reports, however, that entries have already been received from a number of notable skinbeaters, including Joey Shuffield of Fastball, who writes, "Accidental deaths be damned, gaining entry into this elite club would undoubtedly be the crowning jewel of my career." That man has more balls than Johnny Goudie ...