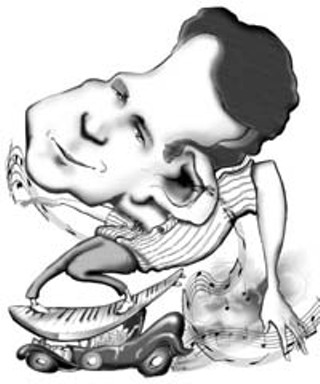 As a veteran local music critic in the 43rd-largest metro area in the country, I've always prided myself on being a really cynical bastard who would never let the adolescent sensation of being starstruck get in the way of telling readers which records they can dance to. Through the years, I've interviewed several artists whose music I've sung along with since grade school, never once yielding to the temptation to begin gushing uncontrollably like some crazy fan. Then I found myself slated to do a 15-minute phone interview with Beach Boys founder Brian Wilson. This is the man who created the soundtrack behind the compelling myth of Southern California as teenage paradise, a place where summer never ends and there are always two girls for every boy. Almost 40 years and millions of albums later, Wilson's inimitable combination of Spector-style AM radio melodies and sun-warmed harmonies are still deeply engrained in popular culture by their constant rotation on oldies stations as well as their use in ads selling everything from orange soda to car stereos.

And then there's Pet Sounds, the Beach Boys' 1966 "answer" to the Beatles' Rubber Soul that earned Wilson modern-day genius status in the music world. Although Pet Sounds wasn't a certified million seller until just this past April, Paul McCartney himself has been widely quoted as saying it's one of his favorite albums of all time and a key inspiration in the making of Sgt. Pepper's Lonely Heart's Club Band.

Despite these accomplishments, Wilson and the Beach Boys have often been unfairly excluded from classic rock's upper echelons. Perhaps it's because most of the commercial high points of their career came before rock became "serious." Or maybe it's because vocalist Mike Love continues to flog the band's legacy in safe-as-milk fashion at baseball games and fireworks displays across the nation each and every summer.

Whatever the case, history points to the aborted sessions for Smile, Wilson's storied follow-up to Pet Sounds, as the moment when the Beach Boys first started slipping from the vanguard to nostalgia. "Good Vibrations," the groundbreaking "pocket symphony" released as a single in late 1966, was the band's last No. 1 hit until 1988's extra-slight "Kokomo." Further damaging the band's credibility was the decision to cancel their headlining appearance at 1967's Monterey Pop Festival, the festival that launched the American careers of Jimi Hendrix, Janis Joplin, and the Who. Despite subsequent worthwhile albums like Wild Honey, Sunflower, and Holland, the Beach Boys would never again be considered a cutting-edge creative force.

And yet, the Beach Boys' story is a long, strange saga that easily trumps that of any other major pop group. After all, how many other bands have gone from unwittingly releasing a song co-written by Charles Manson to being staunchly defended by first lady Nancy Reagan? At the same time, widespread accounts of Wilson's troubled mental state, drug use, and iconoclastic behavior have periodically threatened to eclipse his music ever since Smile fell through.

Therefore, my first reaction when I heard he was doing interviews was disbelief. Could this really be the same Brian Wilson who became infamous for building a sandbox in his living room and staying in bed for months at a time? The same Brian Wilson who spent over a decade in the Svengali-like "care" of therapist Dr. Eugene Landy, whose questionable treatment of the famed musician eventually led to the loss of his license? What would such a seemingly fragile character be doing phoners for?

As it turns out, Wilson is embarking on a summerlong tour for which he'll be playing Pet Sounds in its entirety backed by local orchestras and a 13-piece band led by longtime Beach Boys guitarist Jeffrey Foskett and featuring members of L.A.'s Wondermints and Austin-to-Chicago transplants Poi Dog Pondering. Although the July 26 performance in Dallas will feature this setup, neither the July 25 show in Houston nor the July 27 set at the Backyard will have orchestras, and Wilson won't be doing Pet Sounds in its entirety.

Either way, these shows are Wilson's first performances in Texas since the Beach Boys' early days. In fact, it was a nervous breakdown on a 1964 flight from L.A. to Houston that provoked Wilson to quit touring with the band and focus solely on composing and producing. Since that time, Wilson's discomfort in the limelight has been legendary.

Anyone who saw footage of him meekly waving to a sellout crowd during the ill-conceived "Brian Is Back" campaign in the mid-Seventies undoubtedly felt pity for a man so seemingly uncomfortable with himself. His 1995 marriage to Melinda Ledbetter, on the other hand, has seen Wilson come further and further out of his shell. The fact that he's now on tour with a two-and-a-half-hour show and doing publicity is nothing short of miraculous.

Which isn't to say Wilson has morphed into an artist who spiels upon the intricacies of his life's work with pull-quotable aplomb. Wilson's uneasiness in an interview setting is palpable in his short, clipped answers. My own nervousness, combined with the fact that I wanted to ask him umpteen questions in just 15 minutes, probably didn't help matters much. Nevertheless, Wilson seems genuinely excited about his return to the stage, which began with a handful of shows last year.

"My wife and my manager and I had a meeting one day, and they suggested that I try this out to see if it felt good," he says. "We tried it, and so far it's been great. I feel much more comfortable onstage now. I have a good band behind me. It's a much better band than the Beach Boys were."

Wilson's new 2-CD set, Brian Wilson Live at the Roxy Theater (available at www.brianwilson.com), goes a long way toward backing up that claim. Although Wilson's voice is no longer the angelic instrument it used to be, and the band's harmonies don't match the depth of the Beach Boys', the music is faithful and refined. Tunes like "The Little Girl I Once Knew" and "God Only Knows" are played with the passion of students in awe, which is exactly what the Wondermints were when Wilson came calling.

"We discovered them at a nightclub in Hollywood," says Wilson. "After their show, we asked them if they'd like to be my backup band, and they said, 'Yeah, we'd love to.' They love my music and they knew all the music. They knew it all by heart."

Wilson says he never thought Pet Sounds would stand the test of time well enough to warrant being performed in its entirety 34 years after its release. In fact, when the other Beach Boys came back from touring and heard the music for Pet Sounds for the first time in 1965, they didn't like it.

"They thought it was too far-out to do, you know?" says Wilson. "But then when it was all done, they liked it. They started liking it.

"I knew that it wouldn't be a real commercial success. I did it mostly for the recording industry. It was a special album, and I did it for the music business."

Unlike the acid-happy indulgences and contemporary protest songs of the Sixties, Pet Sounds maintains a large degree of its resonance today thanks to its universal themes of love and loss. Working with lyricist Tony Asher, Wilson explored this well-traveled path in a manner listeners could apply to their own lives. This phenomenon was poignantly explored in a 1990 series of Doonesbury comic strips by Gary Trudeau, in which a character dying of AIDS uses Pet Sounds to come to terms with his mortality. For Wilson and the Beach Boys, spirituality was always at the forefront during the recording of Pet Sounds.

"We prayed for people before we made it," explains Wilson. "We prayed that we could bring love to people, and it really worked. We actually did bring some love to people. We were thrilled with it."

Yet despite all the accolades for Pet Sounds, Wilson actually prefers some of the lesser-known (and sometimes less well-received) Beach Boys albums from the Seventies, most of which are scheduled for re-release by Capitol beginning July 18.

"I kind of like The Beach Boys Love You, 15 Big Ones, and Holland," he notes. "Those are the three albums I think were the best."

"I can't tell you exactly why I like Holland so much, but I think the fairy tale made the whole album for me," says Wilson, referring to "Mt. Vernon & Fairway," the autobiographical fairy tale that came with Holland on a 7-inch EP. "That was a great fairy tale."

Wilson's choice of songs to play in concert can be equally surprising. Live at the Roxy features such Beach Boys rarities as "This Whole World" and "Add Some Music to Your Day," as well as solo material such as "Lay Down Burden," which Wilson dedicates to his younger brother and bandmate, Carl Wilson, who died in 1998 after a bout with cancer. He even performs a snippet of the Barenaked Ladies' sardonic "Brian Wilson" as if he's reclaiming ownership of the media version of his life.

"My wife and my manager suggested I try that because it says the name Brian Wilson in it and they thought it would be a nice idea to do that onstage," says Wilson, not bothering with any deeper analysis. "You know, singing, 'Lyin' in bed, like Brian Wilson did.' We tried it and it worked."

Given all that has been written and said about Wilson, I'm eager to ask what he thinks is the biggest public misperception about him. I'm somewhat taken aback by his answer.

An awkward silence follows as I wait for him to expound on that, but he never does. Perhaps that's a good thing. In a culture where irony and cynicism dominate discourse, Wilson is earnest when he talks about making music to bring love to people. And anyone who has ever luxuriated in the deep blue melodies and harmonies of Pet Sounds will have no trouble believing him.