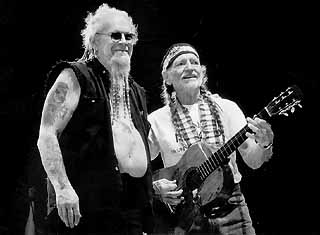 What do you say to a man who's being sent to prison? Not a whole lot. And he doesn't say a whole lot back, but the look in his eyes speaks volumes. With Antone's 25th anniversary kicking off this weekend (see Music Listings), there are those who thought maybe Clifford Antone's trip to the big house might get delayed another few days, but the final hours of Tuesday night saw Antone staring out across his club quietly, preparing to leave the following day for his four-year prison stretch. In stark contrast to his day in court, Antone wasn't surrounded by well-wishers late Tuesday night -- no steady stream of friends on hand to bid him farewell. What was before Antones' eyes was no doubt just as comforting to him, however -- a decent-sized weekday crowd of young people, laughing and dancing to the music of La Tribu and generally making merry in the club that bears his name. Antone hadn't gone to Willie Nelson's picnic that day, nor had he ventured out to watch the city's fireworks display or attended any of the myriad backyard barbecues around town, and it was clear that the irony of it being Independence Day was not lost on him. "I just sat at home," he said quietly and with uncharacteristic brevity. "Too emotional." He didn't say much else, as he continued to look out over his club, his customers, and his world. Then, following a long, only slightly unsteady handshake, Antone added, "Thank you." It's not clear whether he was thanking me specifically for the Chronicle's aid in promoting Antone's, for supporting live music in general, or simply for being there that night as he attempted to prepare himself emotionally for the forced separation from his world for four long years, but on behalf of Clifford Antone, I repeat: "Thank you." This won't be the first Antone's anniversary that'll have to take place without his presence, but once the four years have passed, hopefully it will be the last.

A Wild and Willie Fourth

For most folks, July 4, 2000, was a good day -- a middle-of-the-week mini-vacation of sorts. Approximately 11,000 people convened on Southpark Meadows on Tuesday to celebrate Independence Day with Willie Nelson and friends. That's 11,000 people out front watching the show, that is. "There were another 3,000 backstage," jokes Nelson pal Freddy Fletcher. "That's how you can tell it was a Willie show!" That's not all that much of an exaggeration, either; it was a veritable free-for-all backstage, with press, artists, and fans alike milling about pretty much anywhere they pleased, the resultant atmosphere of camaraderie and fun serving to dispel any security risks that might have been posed by the lax setup. Onstage, a parade of highlights continued throughout the day and into the night. Ray Wylie Hubbard laughingly extolled the virtues of 29 years of singing "Redneck Mother"; David Allen Coe loudly and proudly declaring that anyone who had hoped to see him drunk and foul-mouthed was out of luck, and instead delivering a well-received lecture on the importance of great songwriters, most notably the late Steve Goodman whose classic "City of New Orleans" got a verse or two; there was the inevitable Flatlanders semi-reunion, with Joe Ely joining Jimmie Dale Gilmore during the latter's set; Ray Price was inspiring as always, joined by his host for a haunting "For the Good Times" before Nelson jerked things into high gear with "On the Road Again" and closed the evening by 10:30pm sharp with a couple of gospel favorites. Seemed that everyone in the crowd knew all the words to all the songs all day long, gleefully basking in any and all participation requests from the artists, who included the Geezinslaws, Mark David Manders, Kimmie Rhodes, Titty Bingo, Rodney Hayden, Toni Price, Leon Russell, Patsy Thompson, Jimmy Lee Jones, Lil' Joe y la Familia, Johnny Bush, Bells of Joy, Rogers and Hammerhead, Cory Morrow, Bobby Boyd, Larry Butler, The Fryed Brothers, Mustang Sally and the Blame, Johnny Gimble, Cadillac Voodoo Choir, and more. That's not to say there weren't people dropping like flies from the blistering heat, of course -- the EMS folks kept busy -- but hey, they can't say they weren't being constantly reminded from the stage to consume plenty of H2O from the nearby water fountains and spraying centers (where fans of wet T-shirts gathered cheerfully). It's safe to say the only people not having a good time were the unconscious ones.

The day's centerpiece, of course, was Nelson's own set, which showcased a performance by his Blues Band, whose album Milk Cow Blues on Island Records is set for release the last week in August. The Blues Band consists of Jon Blondell, Riley Osborne, Derek O'Brien, George Rains, and Mickey Raphael (with Bobbie Nelson filling in for Osborne for the picnic). Susan Tedeschi and Francine Reed made guest appearances with the Blues Band, as they do on the album, which also features B.B. King, Dr. John, Kenny Wayne Sheppard, Jimmie Vaughan, Jonny Lang, and Keb Mo. Don't expect to see Nelson's fabled reggae album in stores anytime soon, though. Fletcher says that album is in the can, but that there's currently no label, no release date, basically no plans at all. Hey, maybe this could be an excuse to cross next year's picnic with a Bob Marley festival?

Dale Watson's manager Mike Crowley says that though "Dancing About Architecture" missed including Watson in last week's update of the local "D" artists (Don Walser, Derailers, Damnations) from Austin who had been signed at one point or another to the Sire label, there's no mystery behind Watson's situation. "Dale is no longer on Sire," reports Crowley. "We asked Seymour Stein for a release, and he was gracious enough to give us one." Watson's keeping busy, with an itinerary that calls for him to do over 100 dates this year outside of Texas and probably another 100-plus in Texas. He's also recording a Christmas album at Sun studio next week, before heading off to do scads of touring, with plans calling for him to record a live album in London (and no, says Crowley, it won't be called Texas Calling). Watson also "won the lottery," says Steve Wertheimer, and will be the headliner for the first night at the new Continental Club in Houston when it opens Friday. There are no plans for an official Austin-to-Houston "inter-Continental" party bus for that night or for Saturday's expected Jon Dee Graham/James McMurtry show, though such a rolling party is planned to coincide with the venue's proper Grand Opening, either later this month or in early August.

Add Alejandro Escovedo to the list of people with new albums in the can. Al worked with Chris Stamey on this one, and it should be out either late this year or in January 2001... Junior Brown sounded positively crestfallen in the voice message he left for me on Monday, regarding the moving of the Brian Jones hoot night at the Continental Club. He read my comments in this column last week, which concerned the hoot being postponed to make room for an extra night of the guit-whiz at the Continental Club (which is a good thing, make no mistake), and he called to say he had no intention of bumping anybody's show and to profusely apologize for any inconvenience which may have resulted from his last-minute booking. Not to worry, Mr. B, I was just engaging in a little wordplay, and I doubt if anyone really thinks you have any personal animosity for the late Rolling Stones guitarist. The fact remains, however, that since the SIMS benefit show has been moved, the organizers say that some of the musicians who committed to the original date have had to pass on the rescheduled one. That means there's a call for musicians to jump in and play on the currently scheduled date, Sunday, July 30. Michael Hall & the Woodpeckers and Troy Dillinger are on the bill for the show, with plenty of room for others. (Those interested can contact Larry Cordle at nosecret@mindspring.com or via pager at 603-6889.) Hopefully, there's enough time between now and the end of the month to assemble the necessary top talent, but word from the Continental is that they're okay with holding off on the show a bit longer if that's what it takes to ensure a stellar evening... The Red Eyed Fly is trying out a policy of early shows on Sundays, with music starting at 7pm and ending at 10pm. This Sabbath's bands are the Defrockers (7pm), the Process (8pm), and Stretford (9pm), finishing out the night with what Carl Normal figures will probably be the band's only gig this summer, due to the band being a bit light in the horn section... The mania hasn't subsided over the shows by Russell Crowe and his band Thirty Odd Foot of Grunts coming up in August at Stubb's, but it looks like a number of people aren't quite as personally attached to their tickets as they first thought. Internet auction house eBay has been hosting a steady stream of tix sales, with the price for a pair generally sticking within the $300-400 range. It's easy to tell that the buyers ain't from around here, though, as tickets for the intimate indoor show on August 4 don't seem to be commanding any more than the shows on the 11th and 18th, which are big outdoor affairs. Of course, most eBayers have their hands full just trying to figure out how to look up the tickets; should you search under Crowe's name, the keyword Grunts, or the abbreviation TOFOG? Most budding entrepreneurs are playing it safe and including all of the above... Ursa Major are finally going back into the studio, this time with Terri Lord at the helm, to record a second album. Actually, make that simply a second CD, as their debut disc was an EP... Remember that Calgary, Canada, music festival I mentioned the Bad Livers would be playing at? I'm told that both Bill Anderson and Cherilyn DiMond, formerly of the Meat Purveyors, and their respective combos will be engaging in some sort of supergroup/jam situation with the Livers at the event. Hopefully someone will be recording the gig for posterity -- with any luck such a team up will prove to be all beef, no filler, and we can only hope it's kosher... On a related Rubineseque note, John Burnett, Southwest correspondent for NPR, called to say that a segment on the "Growing Pains of Austin Music" airs this Saturday, 7-9am, on KUT as part of "Weekend Edition," and features Mark Rubin, Tish Hinojosa, Mayor Kirk Watson, Sasha Sessums, Casey Monahan, and a host of others... The Dung Beatles, the local Fab Four cover band that brings new meaning to the term "scat singing," are probably the last band you'd expect to get a record contract. Heck, they're the last band they themselves would expect to get a record contract, but it appears to have happened anyway. Though the band says they're not sure what the name of the label itself will be, they've inked a deal with a company associated with Southwest Distribution and plan to put out The Brown Album sometime soon. Looks like it's true -- the record industry really is turning to shit...