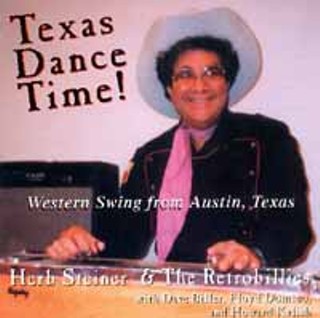 For those who may not recognize his name, Herb Steiner has had a long and storied career as a steel guitarist. Beginning in the 1960s, he worked with Linda Ronstadt as one of the Stone Ponies, then moved on to play with the likes of Michael Martin Murphy, Asleep at the Wheel, Jerry Jeff Walker, B.W. Stevenson, and Alvin Crow. In the 1990s, he joined Johnny Bush's band and most recently has been adding his skill to the sounds of Wayne Hancock, the Derailers, and Dale Watson, while also being a full-time member of what is arguably the best honky-tonk ensemble in Texas, the Cornell Hurd Band. Texas Dance Time! is Steiner's second CD, and fans of Western swing and jazz are sure to find it a pleasure. Some of Austin's best players accompany him: Dave Biller on guitar, Howard Kalish on fiddle, Floyd Domino, Debra Hurd, and T. Jarrod Bonta on keyboards, Karen Biller and Lisa Pankratz on drums, and Rob Jewett on bass. With a thoughtfully selected set of standards ("Perdido," "Tippin' In," "Steelin' Home," "Boot Heel Drag"), Steiner and friends have created a collection of ensemble playing -- with emphasis on steel guitar -- that is both timeless and nearly impeccable. Listening to Texas Dance Time!, it's easy to imagine a large dance hall filled to the brim with couples dancing ballroom-style to a cowboy big band. Since Steiner proclaims in the liner notes that was his intention in recording this collection, it's an admirable and pleasing success.