Mudhoney March to Fuzz: Best of and Rarities (Sub Pop) 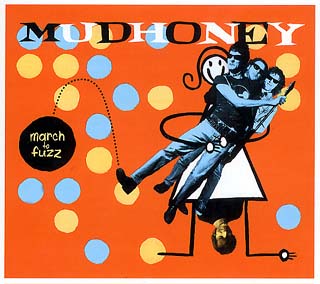 March to Fuzz: Best of and Rarities (Sub Pop)

Seldom has so little been put to such good use. That's the nature of punk rock, and in this idiom, few bands were better at it throughout the rollercoaster Nineties than Seattle's Mudhoney. Four guys, two distortion pedals, and one scrawny, wise-ass singer with a sneer was all it took. When "Suck You Dry," the second song on this perfectly executed 2-CD career summation, blasts out of your speakers with enough fuzzbucket guitar to stop a wrecking ball, you realize Mudhoney actually belongs in the top tier of punk rock acts for the last 20 years! "There are only a few of our songs which I think came out perfect," writes guitarist Steve Turner about the song in the banter-buoyed annotation that accompanies all 52 songs on March to Fuzz. "This is definitely one of them." Another, "I Have to Laugh" from 1998's overlooked Jim Dickinson-produced prize, Tomorrow Hit Today, follows. "Another perfect song," boasts singer Mark Arm, and he's right. They're both right. Two and half hours of screeching, rawboned Sixties garage rock boosted by late-Eighties angst and Nineties bombast couldn't possibly snarl more down 'n' dirty than this mudcovered testament to man's helpless need to just plain RAWK!!! Shifting through six full-length albums and a veritable troughful of singles, EPs, and miscellaneous tracks, the "Best of" first disc slams through a seething, 73-minute main set featuring catalog favorites like "Judgement, Rage, Retribution, and Thyme," "Into the Drink," and "Touch Me I'm Sick," while the "Rarities and B-side" gathers an endless encore's worth of covers: Spaceman 3 ("Revolution"), Angry Samoans ("You Stupid Asshole"), Damned ("Stab Your Back"), Elvis Costello ("Pump It Up"), Black Flag ("Fix Me"), Fang ("The Money Will Roll Right In"), Motörhead ("Over the Top"), and of course Austin's Jimmie Dale Gilmore ("Tonight I Think I'm Gonna Go Downtown"). The Dicks' "Hate the Police" actually closes the first disc, which only proves that, original or cover, Mudhoney absorbs all songs into their airplane engine roar. Bound by a gatefold cardboard sleeve, detailed with artwork by Fotheringham, and supported by a superior design and top-notch graphics, it's clear as much care went into this package as went into the song selection and sequencing. According to Turner in the liner notes, bassist Matt Lukin quit the band for good at the end of 1999, so the group's future is in doubt. Its place in the pantheon of punk rock greats is not.