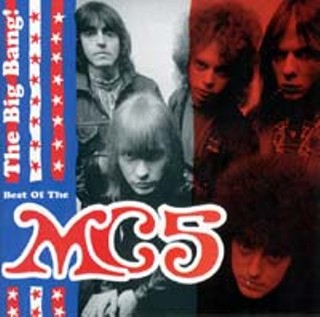 The Big Bang! Best of the MC5 (Rhino)

Nostalgic books and TV movies have inundated the current generation with you-had-to-be-there visions of the Sixties. Yet missing from oft-told tales of love-ins and California dreamin' are the exploits of a group of Detroit hoodlums known as the Motor City Five. "Rock & roll, dope, and fucking in the streets" was their motto, a far cry from "Love one another right now"; in fact, the MC5 would have liked nothing better than to have rounded up the Dead, the Airplane, and the like and whipped their collective psychedelic asses. "Kick Out the Jams," the title track from their debut, was a throwdown challenge to bands headlining their home court, the Grandee Ballroom, where their LSD-fueled gigs created epic cacophony. Anthologized for the first time, listening in sequence makes it clear what went astray. The MC5 were poised to make history; instead, they made all the wrong moves. Their guru/manager, radical leftist John Sinclair, brought them notoriety, not only from the fans, but from cops and quarreling radical fringes. Soon, the band and their supporting circus had pissed off their record company and were banned from both New York and L.A. stages. Sinclair's conceit made him view the MC5 as his mouthpiece, but they jumped ship to then-journalist Jon Landau, whose pop stamp dominates second effort Back in the USA. By the third album, High Time, the band finally gained its independence, but it was too late; drugs and infighting had taken their irreversible toll. The MC5 worked a soul-fired metal groove: vocalist Rob Tyner was a free-jazz fiend (he took his last name from John Coltrane pianist McCoy Tyner), while Fred "Sonic" Smith and Wayne Kramer blended Chuck Berry with James Brown for guitar nirvana. Big Bang opens with rare singles, then plunges into the album selections, leaning heavily on USA. The liner notes are skimpy, and aside from the single tracks and a live "Thunder Express," there's none of the band's plentiful rarities. Yet, distilled down to a single disc, there's not an ounce of filler, either. So? Just another Sixties might-have-been? Maybe, but echoes of the MC5 have rung through bands from the Ramones to the Clash. The Grandee Ballroom is long gone, as are Tyner and Smith and the group's naive idealism and defiant sense of purpose. But for a few brief years, the MC5 tried to change the world with rock & roll. If the notion seems stupid now, well -- you should've been there. Kick out the jams, muthafucka.