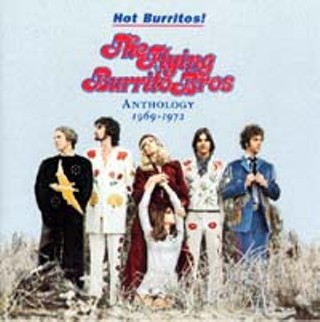 Gram Parsons was overrated. Listen closely and you can hear the howls of outrage, but think about it for a minute: His voice was gentle and clear, but not particularly strong; he was no guitar whiz, playing mainly acoustic rhythm; and songwriting was his forte more than actual performance, which places him right in line with many modern singer-songwriters. Parsons' reputation is predicated mainly on the Burritos and the Byrds' seminal Sweetheart of the Rodeo album, as well as his untimely death and the untapped potential that went with him when he died of a drug overdose in 1973. As for the Burritos' legacy, Bernie Leadon went on to form the Eagles, whose 10-year-long blight on the airwaves was also responsible for countless overly long songs about sunsets and horses. It could even be argued that the Burritos inspired the Grateful Dead's horrid covers of country songs (ugh). On the other hand, the band helped break ground for today's crop of alternative/insurgent country bands. That said, the Burritos were best at playing their own take on country music, country music for dope-smoking, beer-guzzling types stuck somewhere between patchouli-and-granola hippie culture and beer-joint sensibilities. Songs like "Sin City," "Break My Mind," and "Hand to Mouth" all find the band in top form, putting together something that was really unique for the time. Like plenty of latter-day bands, the Burritos found themselves in a netherworld where their songs were too rock or eclectic for country radio and audiences, but a bit too hick for hipper-than-thou rockers. At their best, the band brought to the table clean, lush harmonies, inventive pedal steel and mandolin work, and songwriting that could range from evocative and haunting to tongue-in-cheek. The last two tracks, "Ain't That a Lot of Love" and "Losing Game," were recorded live and show the band to have some real fire and inspiration on stage. On the other hand, the Burritos' covers of honky-tonk chestnuts like "Six Days on the Road," Buck Owens' "Close Up the Honky Tonks," and Merle Haggard's "Sing Me Back Home" sound embarrassingly forced and contrived 30 years later. They lend credence to the band's detractors who describe them as hippies in Tony Alamo suits trying to play country music (the insipid early-Seventies production doesn't help). Going back and listening to them today, their country covers definitely don't stack up well against a dyed-in-the-wool Dale Watson, for instance. This definitive 2-CD collection rounds up the group's three Parsons-led LPs, Gilded Palace of Sin, Burrito Deluxe, and The Flying Burrito Brothers, in their entirety, and also includes an exhaustive, photo-filled booklet on the band's history and a chart of the Burritos' tangled and confusing family tree. It's not likely to change many minds about the band's place in rock history, for better or worse. On the other hand, for die-hard fans or those curious about the band, this is just the ticket.