Devo Pioneers Who Got Scalped: The Anthology (Rhino) 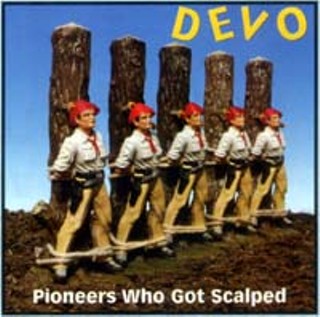 Pioneers Who Got Scalped: The Anthology (Rhino)

"When a problem comes along ... " In all likelihood, your doctor, your grandpa, even your preteen daughter can most likely finish that sentence with, "You must whip it!" The odds are good that any or all of them can further identify the source as Devo, even though "Whip It" never cracked the Top 10, nor did any other Devo song manage to make it into the Top 40. Still, when's the last time you heard a Thompson Twins reference in the media? Devo, on the other hand, gets referenced constantly these days, and for good reason: They were/are a band with a strong concept. It's easy to think of the Akron quartet as a one-joke act, the entropic notion of "devolving" humanity because it's gone as far forward as it's capable, but the Kent State classmates were always prolific songwriters with a lot of strong material and the ability to roll with all the punches that the recording industry was wont to throw at them. Pioneers, the first collection spanning Devo's entire career, therefore, has a lot of ground to cover, and does so fairly well. Choosing from the early recordings, many considered essential to the history of punk rock (though at the time, the band was largely outside that circle) is tough, but Pioneers includes most of the essential tracks from the band's first two LPs, substituting rarer but inferior early demo versions of classics "Mongoloid" and "Jocko Homo" -- both of which illustrate Brian Eno's incredible production on the band's debut, Are We Not Men? The Eno-knobbed version of "(I Can't Get No) Satisfaction," a landmark of the New Wave era's deconstructive period, is also included here, and the compilation choices proceed well through the band's switch from guitars to synthesizers and rock into dance music on Devo's breakthrough album Freedom of Choice, with one major exception. Where in the hell is "Turnaround"? If Nirvana went through the trouble of producing such a fine cover of the "Whip It" B-side, that alone should make the tune a necessity for a collection like this one! Apart from that unfathomable oversight, most of the necessary "lost" tracks are here as Disc One closes with one of the group's obscure character pieces -- a lecture from Nutra, a mascot who briefly took the place of Devo's original sidekick Booji Boy in the early Eighties. Disc Two continues the adventures of Devo after most of us had written them off, and shows that the band's later output, though originally full of padding, shines when picked through carefully; 1990's "Post Post-Modern Man," a not-too-snide reworking of "If I Had a Hammer" from the final Devo studio album Smoothnoodlemaps is a great (swan) song, while numerous forgotten tracks from obscure movie soundtracks are also quite entertaining. The band continues to record sporadically to this day, and damned if Pioneers doesn't make you wonder if there's not another great album left in them before they return to the primordial ooze.