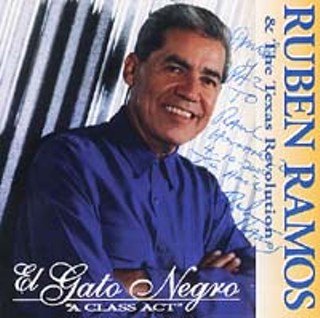 El Gato Negro is on a roll. Pictured on the back of his latest Class Act grinning like a Cheshire cat, East Austin's Tex-Mex maestro hoists his one-seventh share of 1998-99's Los Super Seven booty with glee. Considering A Class Act outclasses the local singer's previous classy LPs while holding its own with the all-star supergroup's eponymous recording, one trusts the Recording Academy (or whatever) will remember Ramos' latest when Grammy time rolls around again. Boasting a bandstand heavy with horns -- two trumpets, two trombones, three saxophones -- as well as duets with local LS7 alums Rick Trevino and Flaco Jiménez, A Class Act sounds big-budget, even as much of his competition comes off like two Casio keyboards and a bad exchange rate on the peso. Big difference, and here the production punch fills out Ramos' traditional sound. The airy, lilting "Vivir Sin Aire," whose brass and reed chorus turns yearning into reverie; Flaco's familiar, accordion-driven antics on "Pedacito de Mi Vida"; a two-stepping, horn-blown duet of "Oye Compadre" with Ruben's brother Alfonso; and the old-timey ballad "Estoy Pensando en Ti" deserve fans of the Buena Vista Social Club seeking out some Spanish delicacies here on the northern half of the Americas. A cover of Kris Kristofferson's "Un Dia a la Vez" caps off A Class Act like an album track from a hoped-for Los Super Seven sophomore effort. Until that occurs, El Gato Negro will just have to make do with his one measly Grammy!