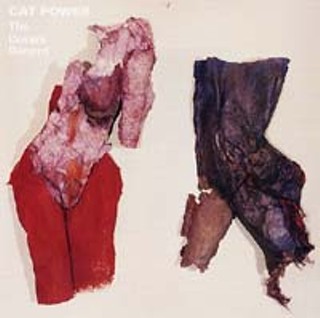 Chan Marshall, aka Cat Power, is prowling around Mississippi. Reached via her cell phone, the 28-year-old singer's current tour finds her traveling solo, "throwing an amp in the trunk of my car and driving from place to place." Touching on a variety of subjects -- the rigors of touring, the rigors of making music, the rigors of growing up in the South (North Carolina, Tennessee) and living in New York -- Marshall's sharp wit and buoyant personality belie the somber tone of her music, especially that of her latest Matador release, The Covers Record. Her fifth release, Covers features the singer's compellingly cryptic interpretations of classics like the Rolling Stones' "(I Can't Get No) Satisfaction," Velvet Underground's "I Found a Reason," Nina Simone's "Wild is the Wind," and standards like "Sea of Love" and "Salty Dog." Done on guitar or piano with no accompaniment, the material, like the entire Cat Power catalog -- is mesmerizing. Scary, even.

Austin Chronicle: The emotional level of your music is intense. It seems like reproducing that would be draining, particularly playing three nights straight with one night off, over and over ...

Chan Marshall: It'd be better if I was flying from city to city, but I'm driving, so on those days you see a day off I'm still working, pushing a pedal and getting gas and driving to the next town. Touring isn't really fun unless you're getting taken care of. And I don't make enough money to be taken care of, so I have to do it myself.

AC: Do you get to see anything of the places you go?

CM: No, not really. Usually when I show up, I have time to soundcheck and play and then after that it's dark, so there's not much to see. And the next morning, I have to leave for the next place, so yeah, you don't see much. Day before yesterday, I had a drive day from Minneapolis all the way to Lawrence, Kansas, and when I got there, I went straight to bed. So yesterday morning, I walked around town. Days like that are good, but they're rare.

AC: Did you do the William S. Burroughs pilgrimage in Lawrence?

CM: No, I didn't. [Sonic Youth drummer] Steve Shelley drove me by his house before, though.

CM: I've read part of Junky, but I haven't even seen Naked Lunch the movie. I know what he is and I know what he does; there's a lot of writers I get confused about. The fact that they're expressing something in their own voice is admirable and all that, it's what they're expressing I have trouble with -- when the subject matter is on the dark side. Someone who is a writer, who made people's heads turn, who had a voice that made people listen, I'm always wondering about -- like the prophets in the Bible; Burroughs could have been a prophet, but ... I just have this weird feeling about people who do good and do bad. I respect him, but there's a sentiment that what he writes about is clearly from the dark side. I think that's dangerous to intellectualize, I think it's bad for me. Like the way people think that rock & roll is really cool, and heroin and being really rude and tough and arrogant is cool, because you're rock & roll or whatever. I think that's really dangerous because it's so negative. I don't know, I feel weird about it.

AC: Given the mood and tone of your music, your views on the "dark side" of art may come as a surprise to some of your fans. 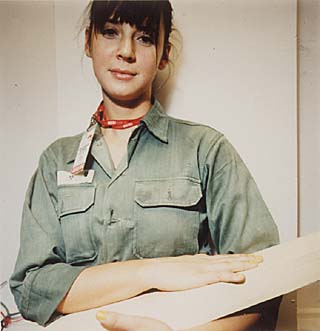 CM: People do think that, they're always like, 'Oh you're so depressed, you're so dark.' But [my] lyrics are triumphant, like everything's gonna be okay. Yet when I pick up Junky and read it, it's like ... I don't need this filtering into my consciousness. People are defined by their danger, by their rock & roll, it's just weird. It's not cool to be a junky, and it's not cool to write about it. I mean, I know too many friends who have died from it that I only see the danger in intellectualizing it.

AC: One of the songs on The Covers Record, "In This Hole," is yours. When you started putting the album together, did you intend it to be all other people's material or did it just happen?

CM: Actually, when [the previous Cat Power album] Moon Pix came out, I wasn't gonna tour on it. I was just gonna leave it alone. But then I realized I felt really good about the songs, and for the first time in my life, I had practiced with a band, so I sort of switched the songs around and made them more triumphant sounding, more major chords -- more "rocking." Sometimes, toward the end of a show just out of nowhere, I'd start playing "Kingsport Town," or some other song would just come out, because I needed something new and something smooth, just a good song, so I didn't have to rock or do the same old monotonous thing. By the end of the tour I had all these covers that I kept doing.

When I was done with the tour, I was sitting at home playing music, these chords over and over, relaxing, and I started singing "Satisfaction." Just started singing it. I never thought I'd play it again. And I had bought a piano about that time. I was playing it and would play this music over and over and over, and I would start singing the chorus for "I Found a Reason." Then, when I was in the studio, the guy said, "We have a piano," so he miked it and I was fucking around, and he said, "Let me check the levels," so I started playing "Wild Is the Wind." I really liked it, so I got some tape and put it on the areas where I'd put my fingers. While he had been checking the levels, I was playing that, so then we recorded it. That's the one on the record, that's the recording.

Like "Satisfaction" and all these other songs, they weren't meant to be on a record. Near the end of my Moon Pix tour, I felt good about playing them live, and Matador wanted me to put out a record, and I didn't want to put out my originals -- which I've already recorded. I just changed my mind and said I want to do this.

CM: Already done. That recording just like this recording just like all my other recordings has been so rash and hasty, like, "Oh yeah I really wanna record." So I get the advance, and then it's like, "Fuck, I have to do this record, 'cause they sent my advance." So I have to do a record in two or three days. But for the next record, I want to do something I've never done before, I wanna try to make a record. I've always had ideas when I've been recording, but I've never done them 'cause of time and money and rushing. For the next record, I'm not putting out those songs like they're done; I'm gonna take them and re-record them and try to do something like a mature, responsible person would do them -- try to give them more attention, actually think about them. People ask how it was recording this song or that one, and it's just like, "I don't know, I just did it. The guy pressed record and I just did it."

AC: You said before you have no urge to rock out?

CM: No. I think its easier for men to be accepted when they're rockin'. I think women are judged pretty hard if they do things like that. I try not to think about that, but when I get asked questions about it, I can't help thinking about it. For now, I don't want to do that, I want to do this mellow thing.

AC: Is this mellow thing a reflection of your taste in music?

CM: I used to listen to those songs a lot. Now I don't. I probably listen to Mary J. Blige and Hot Boys more lately. On my next record, maybe I'll put a little R&B. I do sometimes whip out "Mary," [starts singing] "I said, I said I'm just Mary-y-y-y..." 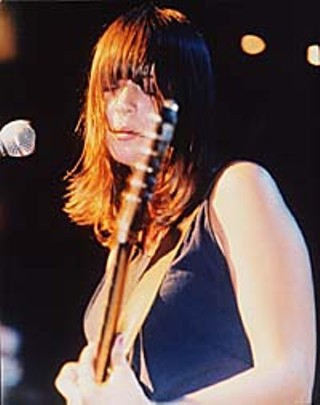 AC: You're playing the Scottish Rite Theatre here, will there be a piano there for you to play?

CM: I gotta tell you a joke. An Englishman, an Irishman, and a Scotsman are sitting at a bar. The Englishman looks down and says [in an English accent], "Oh my, there's a fly in my beer. I couldn't possibly drink this." The Irishman looks down and says [in a soft brogue], "Oh there's a fly in me beer. That's alright, I didn't drink much" and he takes it out and drinks the beer. The Scotsman's got the fly on the bar and he's pressing on his stomach, yelling, "Give it up ya bastard!"

AC: Are you playing a piano on this tour?

CM: I have one tied to my car, I'm towing it across the country.

AC: Those casters must catch fire.

CM: Yes, I'm playing a piano everywhere. Only the New York audiences get to hear the auto harp on "Sea of Love," because I left it in my closet. It's a sentimental thing, I can only play my own guitar. I can't play a Casio, I have to play a piano. Everyone's like, "Maaan, just get a fuckin' Casio, come on!"

AC: Save that for when you start using samples.

CM: I'll save that for when I'm on tour with Beck.

AC: Have you seen Beck?

CM: I saw him in Melbourne a few years ago. He was pretty amazing. Somebody needs to sling his ass in a fucking Gap commercial. It'd be great. It'd make sense if he'd just come out with a really good tune -- boogie woogie.

AC: I'll let you go. Have a good show tonight.

AC: Break a leg, they say. See you when you get to Texas.