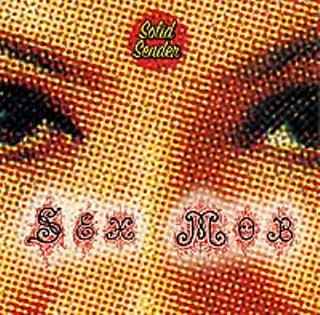 The Downtown New York jazz scene, with its epicenter at the famed and funky Knitting Factory, has bred and nurtured its fair share of eccentric and genre-bending ensembles, and Sex Mob fits right in as a full-fledged, card-carrying member of this "irreverent school." For starters, the Mob uses brief punctuating musical statements that mirror Ornette Coleman's pianoless, trumpet/saxophone quartet, but they also borrow significantly from the spirit of early New Orleans improvisation and the freewheeling energy of Charles Mingus. Not unlike their 1998 release, Din of Inequity, the hook for Solid Sender is the quartet's penchant for smart and indeed, smart-ass covers of well-known artists and tunes. Ellington to Nirvana, James Brown to the Rolling Stones, Elvis to the Grateful Dead to Buffalo Springfield; all are given a creative, if not downright twisted, overhaul. Head mobster, slide trumpeter Steven Bernstein's stints as musical director for John Lurie's Lounge Lizards, co-leader of eclectic trio Spanish Fly, and arranger on various film scores, have served him well as juxtaposes an array of disparate elements into a scattered semblance of cohesion. Along with the artfully skewered covers comes a handful of Bernstein originals that tend toward a funky, New Orleans brass band groove. The best of these are the opening title track, which effectively employs DJ Logic scratching over and around the riffing horns, and the playful "Not Boweevil," replete with requisite "street sounds." Make no mistake, the sounds of these streets come clearly from lower Manhattan, not the lower Ninth Ward, but that distinction is what makes Solid Sender such a delightfully heady affair. (Thursday, Elephant Room, 1am)