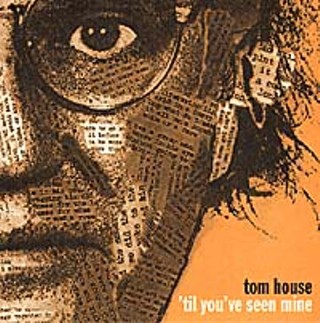 'Til You've Seen Mine (Catamount)

Though he calls Nashville home, Tom House doesn't really fit in there. In fact, it's doubtful he fits in any big town. His music is primitive and acoustic-based. Someone scrapes on a fiddle. Somebody else picks up a jug and blows into it. Meanwhile, a rhythm starts up, just two pieces of wood being struck against one another, House strumming a few chords and his oddly weathered voice begins to sing. These are sounds from the hills, not the suburbs. Equally entrancing are the poetic lyrics. House tells tales of life in today's American South, but these stories everyone else has seemed to miss. In the old days, this music would be called folk music, and it's true, at times, that House recalls the darker side of Dock Boggs or perhaps Woody Guthrie singing the truth as if it's the only thing he knows how to do. 'Til You've Seen Mine is House's third album, and with the help of folks like Sam Bush, Pat McLaughlin, Tracy Nelson, and David Olney, it's easily his most accomplished. Tunes like the bluegrass-tinged "Where Will You Lay Your Head," as country as the Carter Family, "The Cold Hard Curve of a Question Mark," and the subdued talking blues "Letter From My Father" demonstrate House's unique manner of writing songs that are forceful because of their simplicity. House's admirable talents grow with each new release and 'Til You've Seen Mine welcomes you to his one-man town. (Friday, Cactus Cafe, 8pm)