Friends of Dean Martinez A Place in the Sun (Knitting Factory) 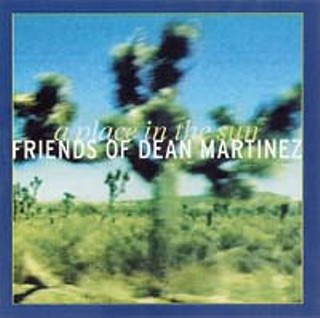 A Place in the Sun (Knitting Factory)

The poetic, sometimes grotesque beauty of an early 20th-Century German expressionist film like The Cabinet of Dr. Caligari comes to life in the 1926 silent screen classic's cardboard sets and painted shadows. Against this stark, impressionistic background, a nightmarish tale of madness spreads like an ever-widening pool of black ink that eventually engulfs the audience in its dark spell. A Place in the Sun, the fourth full-length from local-dwelling Friends of Dean Martinez, may profess to dwell in the sunlight, but rest assured, said orb rises and sets in the land of the midnight sun. Composed as part of the band's original score for Caligari, yet another unforgettable installment in the Alamo Drafthouse's pairing of live musical accompaniment to silent films, A Place in the Sun is bookended by the full lunar eclipse of the title track/film theme. Spreading like night, the nine-minute instrumental from this silent fourpiece sets a tone several octaves lower than FODM's otherworldly Knitting Factory debut from last year, Atardecer, which transported best buddy Bill Elm's version of Santo & Johnny into the 21st century. A Place in the Sun takes up where Atardecer left off, and does so in an evolutionary suite-like fashion. Connecting the album's thematic centerpieces, a magnificently mescaline trip on jazz standard "Summertime" and keyboardist Graham Reynolds' beautiful chamber piece, "Broken Bell," featuring the Tosca String Quartet, are Southwestern steel-guitar reveries like "Siempre Que" and "Nothing at All." The swirling miasma of "White Lake," in contrast to the rainy-day melancholy of "When You're Gone," and border dance "Pistola Agua" flesh out A Place in the Sun -- a poetic, sometimes grotesque beauty of early 21st-century expressionism. (Friday, Copper Tank North, 1am)