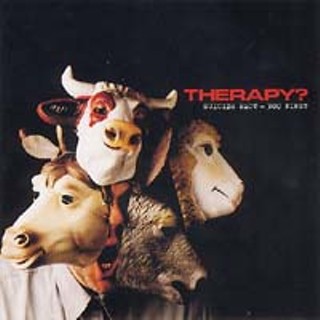 Like a long-repressed childhood trauma, Belfast's Therapy? rears its hydra head to scare the living shit out of Seventies metal wannabes. The decade-old quartet's first stateside release since 1995's badly burned Infernal Love on A&M, Suicide Pact -- You First is exactly what its title describes: a no-win situation -- especially for you. It's only on the album's last-listed cut, "Sister," a delicious, one-chord-sounding drone with straight-ahead vocals and no surprises, that the pistol in your hand finally discharges: Queens of the Stone Age. Bong rock, a catatonic monotone whose flatliner contagion has become nitrous oxide for generations X, Y, and Z. Best cut here, right? Perhaps, but it's the only such track on Suicide Pact. The rest is the same straightjacketed madness that has marked wild-eyed Andy Cairns' work from the beginning, the singer/guitarist's deranged persona spouting vile vitriol laced with salacious wit. Though Yanks might reference Therapy? from its golden American moment, 1994's commercial breakthrough Troublegum, the band's LPs before (Nurse) and after (import-only Semi-Detached) reinforce the fact Cairns & Co. were always a psychopathic hardcore band with industrial trappings rather than Thin Lizzy metal disciples; NC-17 in an R-for-radio world. "Hate Kill Destroy," with its processed vocals riding a UFO guitar riff and the multiple stabbings of "Little Tongues First" stand in stark contrast to the Eddie Cochran-gone-rabid opener "He's Not That Kind of Girl" and cherry tone of "Jam Jar Jail." Youse boys wanna conquer the States? Play two chords and two chords only. Or get lobotomies. (Thursday, Gallery Lombardi Lounge, 11pm)