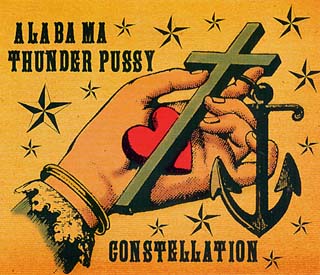 What does the title of Alabama Thunder Pussy's third release Constellation aim to imply? A pointed arrangement? A broader vista? A star-cluster fuck? A little of each. On their third album for freak artist Frank Kozik's metal blender Man's Ruin label, the Richmond, Virginia, quintet opens with the partially live "Crying Out Loud"and closes with the over-10-minute "Country Song," a headbobbing rocker turned into late Sixties sonic psychedelia. In between, you'll find the four-minute Skynyrd-inflected metal jam of "Ambition,"the dreadnought-driven riff of "Obsari,"a Marshall sonic wall of punchy distortion in "6 Shooter," and the sock-peeling volume of "Negligence."Thanks to the addition of acoustic guitars, piano, and organ, the tunes on Constellation are more diverse in character, more adventurous, than those on their previous, turn-up-more-with-each-listen River City Revival. It sounds as if the band has been listening more to early Allman Brothers of late, than their equally loved Black Sabbath. Even though Constellation doesn't reach the white-hot intensity of River City Revival, its increased texture will still rock you silly. (Saturday, Emo's Jr., 1am)