Black Kali Ma You Ride the Pony (I'll Be the Bunny) 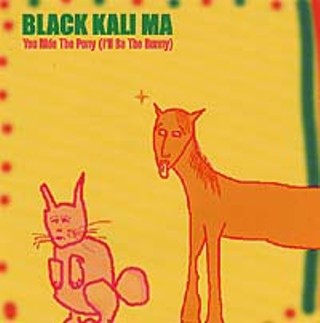 You Ride the Pony (I'll Be the Bunny)

Whoa! Who pissed off Gary Floyd? Besides his mother, that is? You Ride the Pony opens with "Kali," the most menacing maternity-themed song since Glenn Danzig advised her children not to look his way. Given Pony's pummeling nature, it's not surprising that the ex-Dicks and Sister Double Happiness linchpin's new outfit derives its name in part from the same goddess who inspired her followers to perform unauthorized open-heart surgery in Indiana Jones and the Temple of Doom. This is straight-up nasty, and it fuckin' rocks. Browbeating drums, a thick-as-thieves guitar/bass attack, and vocals delivered in a glowering growl/sneer hybrid (evincing a leather-lunged debt to AC/DC's Brian Johnson when Floyd gets worked up) make for a harrowing 40-plus minutes of thick-muscled mayhem as exhilarating as it is intimidating. The lyrics offer little recourse, dwelling as they do on guns, evil clowns, getting beat up, and the incomprehensible Jasper murder of James Byrd Jr. ("Movin' On"). On the bunny side, "Wonderful" offers a chugging Dino Jr.-like stew of meaty melody and positively giddy lyrics ("you're so wonderful"), but as a whole, Pony is much more about "the pleasure we find in pain." It's a kick-ass album, but as a Mother's Day offering, it's something only Joan Crawford could truly appreciate. (Saturday, Atomic Cafe, Midnight)