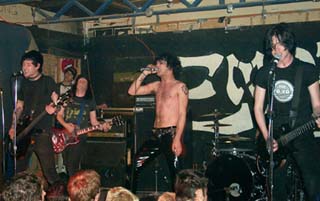 When you're face to face with a boozy crowd of leather-decked rockers, sometimes the best thing to do is to throw down with chaotic impunity and worry about such nonessentials as cohesion later. Such was the case at the Sub Pop showcase held Friday night in the unforgiving concrete vault of Emo's. When cheap beer and patio social opportunities abound, you damn well better have the on-stage equivalent of the Hindenberg disaster to capture the people's fancy. Tonight, one band had it and one band did not. London's Yo-Yo's were a good-natured foursome grinding out a sound approximating the pre-London Calling Clash if Strummer and Co. had come up in Midwestern bars instead of English pubs. In addition to having the best collection of sideburns I've seen this week, everyone except the drummer took turns at the center-stage mike in an uncommon display of egalitarianism. For a band that was jackhammer loud, the Yo-Yo's also maintained surprisingly good vocal harmonies. Unfortunately, their stage presence did not back up their chops. Perhaps it was jet lag, but the band rarely broke from their stoic rock guitarist stance. Without the visual excitement of frenzied movement, their show somehow lost a little something and wound up in the realm of good-not-great. On the other hand, Vancouver's Black Halos hit the stage in a whirling dervish of motion that made you wonder how long it would be until someone had their eye blackened by a guitar neck. Vocalist Billy Hopeless looked and sounded like a cross between Mick Jagger, Iggy Pop, and Stiv Bators. Within three songs, he was making the obligatory climb up Emo's P.A. columns that seems to take place at every one of the club's punk rock high-water marks (the Dwarves, the Makers, etc.). Hopeless also had a penchant for simulating everything from bondage to shooting up with the excess mike cord. At one point, after the anthemic "Fucked From the Start," he simply fell to his knees and flipped the bird toward the heavens. Toward the end of the set, the Black Halos ripped through "Retro World" (easily the catchiest song off their Die Young, Stay Pretty album) to the raucous approval of the devotees at the foot of the stage. That would've been enough, but the quintet kept going and delivered an aural pile driver in the form of Kiss' "Deuce." It was an obvious choice, but a perfect one for a lager-fueled night at Emo's. This, ladies and gentlemen, was multi-sensory entertainment worth leaving the living room for.