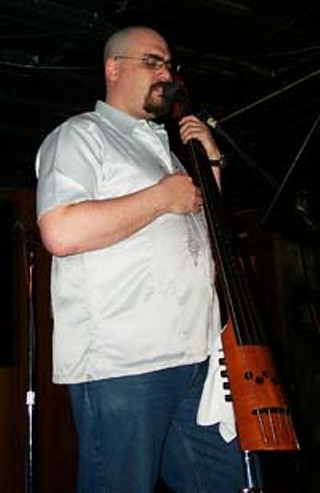 He started midway back of the room, bellowing in a growly blues wail, his easily 6'4" frame meandering through the startled crowd as he made his way to the stage. "My grandfather blew his brains out all over the house. He didn't even have the courtesy to go outside or to the woodshed," he said. The confessional Eric Mingus laid on the packed Elephant Room was greeted by a suddenly hushed and expectant room, gathered no doubt to see what would come from the son of legend and icon Charles Mingus. What did come from the stage was poetry -- intensely personal and loud poetry, bellowed in a voice that was all harsh and soulful gospel. It was a blessing in itself to leave the cold and rainy night and descend into the warm, smoky, lowlit basement club, and the comfort deepened as Mingus, all alone, pulled at the strings of his electric upright bass. Slow and true, playing straight melodies like that of the Who classic "Baba O'Reilly," which he played true to the original, a simple bass line that turned the rock anthem into bluesy Southern gospel. The music was smooth and simple, and unfortunately that's how it remained. Unfair as it is to expect an echo of the father in the son's playing, Eric Mingus more often made an instrument of beating his chest or tapping the mike stand in bass-drum rhythm than he did of his bass guitar. The best music came during a perfunctory riff that conjured the ghost of Mark Sandman more than anyone else, but that was quickly aborted. The poetry was the focus of this showcase. Sung or spoken, Eric Mingus' words were deeply and gratingly personal, laying bare the troubles of his lineage, of a conflict in racial identity, attacked more on the front of external misunderstanding than of internal strife. He seemed uncomfortable, even awkward, when addressing the audience in between numbers, which emphasized the passion in his voice and his person when he was reading or reciting or belting out his verses. He ended his first piece with the line "My grandfather blew his brains out all over the house, and I keep finding pieces of it everywhere." Even if this wasn't the show that was expected, it was certainly a show that wouldn't soon be forgotten.