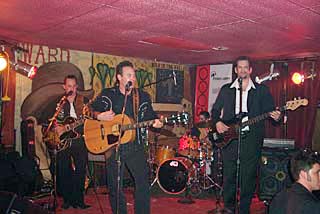 Those California bands sure do dress nice. Nudie shirts, Tony Alamo slacks, crocodile boots that cost more than a lot of pawnshop guitars do. The illegitimate offspring of the Man in Black mixed it up on the newly reconfigured rear stage of the Hole in the Wall. With a fairly straightforward four-piece lineup, these San Diego Bastards put forth a set of midtempo, slightly melancholy honky-tonkers dealing mainly with interstate highways, trucks, and long-gone women. It's the mark of a polished band when that minimal setup doesn't sound stripped-down and you don't miss the pedal steel, mandolin, and fiddle; indeed, the Bastards' sound is full enough to make the extra instruments nearly redundant. The timbre of the vocals was reminiscent of a slightly darker Dale Watson (think $95 worth of Dale, $5 worth of Chris Isaak); just to drive the point home, the boys even pulled out a Watson song about halfway through their set as a salute to the home team. Even with their chops and style, though, the Bastard Sons could use a slight kick in the pants at times -- too many of their songs strike a straight-down-the-middle groove, and it's all too easy to wear a groove into a rut. Two notable exceptions were "Too Late", a Chuck Berry-ish number that chugs along like a countryfied version of the Blasters, the singer beating that acoustic guitar like a redheaded stepchild, and the set closer, "Interstate Cannonball," which comes much closer to the "roots rock" appellation than the rest of the band's material. The Sons also threw in an achingly atmospheric Spanish-sounding number to break things up a bit, but their songwriting overall could benefit from more variety, maybe a shuffle, maybe a rockabilly number, maybe a train-beat song or two. It's certainly easy enough to gauge that kind of thing from crowd reaction, since the two uptempo numbers had a double-espresso effect on the audience. As it stands, the Bastards have a nimble guitar player, dependable rhythm section, and strong baritone singer, but an oddly unmemorable set. And no, they don't do any Johnny Cash covers, but man, those Nudie shirts ...