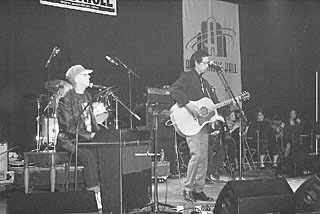 John Cale and Alejandro Escovedo perform with the Tosca String Quartet at the Sterling Morrison tribute at the Austin Music Awards. (Photo By Gary Miller)

"What can I say," shrugged Charlene Hancock at the podium, husband Tommy X standing behind her in formal attire and a cowboy hat. "Music loves us, and I'm filled every day with it." Voted into the Austin Music Awards' Hall of Fame, the Hancocks all but glowed on the Austin Music Hall stage. In a year when names like Bob Schneider, Trish Murphy, and Terri Hendrix won honors normally reserved for the old Austin vanguard (Vaughan, Sexton, and Ely), it spoke volumes of an Austin that's quickly disappearing that the Hancocks were remembered by the public that determines these awards. As comic relief Kerry Awn would later joke, "Austin used to be 'Groover's Paradise,' now it's dot.com gigabytes." Ain't that the truth. And yet, there were the Hancocks, acknowledged as the first generation of Austin singer-songwriters to set in stone a time-honored Central Texas storytelling tradition. There was magic in the way they danced in the audience later while Hendrix and Ray Wylie Hubbard took up the singer-songwriter standard and rocked the house. Singer-songwriters rocking the house? That they did; Hendrix, along with steel player/producer Lloyd Maines ("Now he's even more famous for producing a Dixie Chick," announced emcee Paul Ray), was "on" from the word go. When Hubbard joined them three songs in, it looked at first as if the hoary old redneck would douse the set's momentum with his stellar songcraft. Wrong. He was the very definition of outlaw country, ripping through "Conversation With the Devil" and "Wanna Rock & Roll" like it was one of Willie Nelson's Fourth of July picnics circa the mid-Seventies. If out-of-towners hadn't yet caught on to the fact that they were in the Lone Star State, Hubbard's set was all the reminder they needed. It made you want to start a bar fight, and received a standing ovation. "Welcome to Austin," said Awn. "Enjoy your stay, but don't move here."Shawn Sahm and the tribute to his father didn't help matters, opening with a roof-ripping version of "Nuevo Laredo." Doug Sahm was in the house. "My dad took Texas everywhere," announced Sahm, and with former Pariah singer Dave Derrick in a black cowboy hat and shades backing up the son of Sahm, it looked like the ol' Texas Tornado was there to do it himself: The resemblance was eerie. Both "Mendocino" and "She's About a Mover" drove away the eeries in a hurry. "I've been a lot of places," said Kelly Willis a little while later, accepting one of her numerous awards (Female Vocals, Country Artist, and Album of the Year), "and nothing compares to Texas." It was obvious by then, the Texas Trumpets laying on their Eastside Austin rhythm & blues like a hot August night when it rains snakes from the sky (according to Awn, anyway). Ted Roddy, another inductee into the Hall of Fame, echoed the evening's theme, thanking God for his being born in Texas. Jon Dee Graham, Singer-Songwriter of the Year as well as top Hall of Fame vote-getter, was a little more irreverent. "Thank you for the Irving J. Thalberg award," he cracked, giving way to Willis' set. Whereas the question all week had been "What time is the Sterling Morrison set?," after Willis was finished, a mob of people heading toward the back of the Music Hall seemed to be asking where the exit was. Whether they know it or not, they're sorry they missed the Morrison tribute. The Velvet Underground co-founder, who moved to Austin in the Eighties after walking out on the seminal two-chord-wonder band, was paid tribute by former bandmate John Cale under the guidance of Alejandro Escovedo and the Tosca String Quartet. Opening with Cale on acoustic guitar performing "Amsterdam," the tribute started off slowly, the introspective song bringing the evening's energy level down. Taking a seat at the keyboards next, Cale and Escovedo rummaged around Morrison's mood music with a serious, somber tone. Escovedo's "Tugboat," which crowns his 1996 Rykodisc album With These Hands, didn't exactly lighten the mood any, but it brought out the ghosts like a bulldozer in a graveyard; you could almost feel Morrison's surly self stirring. When the band launched into the last song of the set, "Waiting for the Man,"he and Sahm must've been grooving together in paradise. With Cale still on the keyboard, Escovedo picked up an electric and gave his longtime drummer Hector Muñoz something to pound about, and pound the band did. That was what the music intelligentsia had come for, and they were not disappointed. The light of the Velvet Underground was blinding in those moments. Bob Schneider ended the evening, but by that time he had been put in his place: a long, long way from legend.