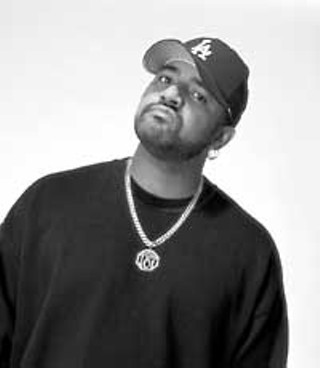 Lyrically "smackin' fools" left and right, Smackola's bicoastal style engulfs the 27-year-old's native "killa Cali" as well as the sticky verses of his present ATX surroundings. On the forthcoming Verbal KunKushunz CD, he comes "like Timothy McVeigh blowin' the roof off this mother."

Smack's not talking out the side of his mouth, either. Firmly grounded in his Waay Foul crew (DJ Crash, Jadesta, Mr. Dizz, LD, Tee-Tay, Ntymydate), and soon to be the first artist to represent boxing G Roy Jones Jr.'s Body Head Entertainment on wax, the man born Thomas Chapman is "spreading through MCs like venereal diseases," vigilantly checking for "salt shakers." Salt shakers?

"A salt shaker is basically a player hater," he enlightens. "But I say a salt shaker, like throwin' salt in your game or whatever."

Reared in Sac-town, the landlocked capital of the "craziest state on the map," Smack began aping Run-DMC and the Disco 3 (better known as the Fat Boys) as a youngster. Shuttling through Atlanta and Montgomery, Alabama, he wound up as a cook in the Army at Killeen's Fort Hood.

"I had to get out, because I kept thinkin' about the music," he says. "I'm up there cookin' macaroni & cheese or something and I'm rappin'."

Weekend trips to Austin made him doubly itchy to get back on the mic. Citing Tee-Double, NOOK, Flo Mob, and the Waxwerks bunch as worthy partners in rhyme, he says all it takes is one act blowing up to get a city notices. Verbal KunKushunz might be just that explosive, showcasing Smack's heavyweight skills. The crunked-up "We in the Game" and loc'ed-out "Sydewayz to Ya Hyghwayz" are custom-built for tearin' da club up. But it goes a little deeper than that, as "Home of Tha Earthquake" finds him ruminating on his roots, and on the riveting "Lookin' for the Anzwer," mercilessly grills God about his infant son's 1996 SIDS-related death.

"It was real painful, because it was right at the time I realized that I need to really do this, take care of him and [the mother]," he says. "I figured everything happens for a reason, and here I am chasin' this music, so now I have no choice but to make this happen. Every day I think about that, and I think, 'I can't stop. I have to keep going.'"