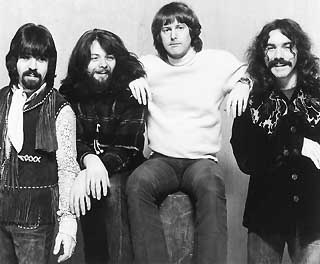 Crowning Columbia Legacy's illustrious three-year restoration of the Byrds canon, concluding last month with the group's last three titles (Untitled, Byrdmaniax, and Farther Along), the previously unreleased Live at the Fillmore, February 1969 rises like a Phoenix from a 35-year-old body of work that's given rise to several generations of alt.country insurgents. Roger McGuinn, the Byrds' main composer and driving creative force, credits the reissue series' producer Bob Irwin with the discovery.

"He found this live Fillmore show totally by accident," says McGuinn. "Nobody knew it was there in the vaults for 35 years or whatever. I was blown away. I couldn't believe how good it was."

The ever-genial Chicago native agrees that the Byrds albums never sounded better than they do now, but if you assume the 57-year-old Pete Seeger idolizer is sitting around contemplating the past, guess again. This morning alone, McGuinn's already answered hundreds of e-mails generated by his Mcguinn.com Web site, and is busy setting up microphones so he can record the latest addition to his continuing "Folk Den" song series, then make the results available for no-cost downloading. At Seeger's request, he's cutting another trad gem, "Dink's Song," adding that a "Best of Folk Den" project will see its way to retail shelves soon. The first three volumes of the series are available only on MP3.com.

For his SXSW debut, McGuinn plans to duet with his trademark Rickenbacker, as well as an acoustic guitar. This has been his life since 1981, out on the road with his wife six months out of the year. Asked for a favorite Byrds album, he chooses Mr. Tambourine Man for his own purely nostalgic reasons; he's also partial to 1968's Notorious Byrd Brothers. The new Live at the Fillmore is special because it showcases a Byrd every ounce as high-flying (and dearly departed) as Gram Parsons -- picker extraordinaire Clarence White.

"He was like Hendrix," McGuinn sighs fondly. "He was that good ... I would like to see Clarence White get some of the appreciation Gram gets. I think it's a strange thing Gram got so much attention. I don't begrudge him that -- I mean, he's dead."

"I said at one point to Chris Hillman, 'Hey Chris, the dead guys get all the girls.'"