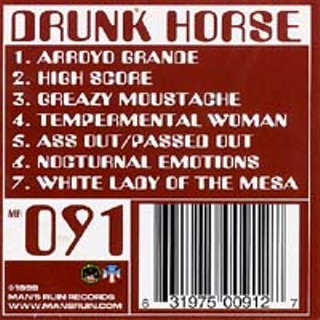 Rearing up on its hind legs like Robert E. Lee just dug his silver-tipped spurs into the beast's tawny hide, Drunk Horse is a steed worthy of its pedigree. The Oakland, California, quartet, led by singer, pianist, and sole composer Elijah Eckert and spurred on by six-string Samurai John Mills, bucks and kicks as hard as its Man's Ruin stablemates, but its Southern swagger distinguishes it from the herd. Opener "Arroyo Grande," Molly Hatchet by way of Mudhoney, busts out of the gate with a jacknife riff, defying any and all to stay aboard its broad back. Mills gets some crucial guitar variance in "High Score," his drone smelting über-Euro metal and some Motor City mayhem. "Greazy Moustache" crawls out of the abyss only to meet its match in the PMSing "Tempermental Woman" ("typical bitch, one hand on the rein, and the other on the whip"). The organ intro to "Ass Out-Passed Out" rectifies the sexual tension between Grand Funk Railroad and Red Hot Chili Peppers, ending up asleep and slobbering on itself by the time "Nocturnal Emotions" is ready for a goodnight Kiss. Left wandering to die out in the desert, "White Lady of the Mesa" gives way to a bonus stoner snort, an acoustic out-of-tuner from an era where lids were a standard measurement. Good shit. Bet on Drunk Horse. (Emo's Main, Saturday, Mar 18, 8pm.)