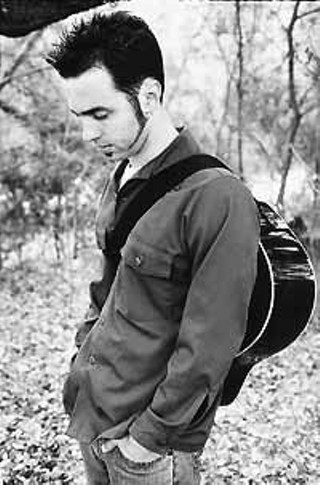 Last December, Blu Sanders played the highest-profile, highest-pressure gig of his young career. Kris McKay's Too Many Guitars songwriter-in-the-round shows typically offer a collection of formidable local talent, and this La Zona Rosa gathering was no exception: Stephen Bruton, Jon Dee Graham, Kacy Crowley, Fastball's Miles Zuniga, and Lonelyland's Bob Schneider and Bruce Hughes all gathered to showcase their latest songs. Naturally, the wily gang of veterans was too polite to admit it, but everyone clearly wanted to sit next to Sanders; the thinking is whoever follows the "newcomer" slot has the least face to lose. For his part, Sanders never let on that he might have been out of his league, but he does remember glancing at a sheet of lyrics Crowley had tucked under her chair, then peeking at his own similar cheat sheet. After that moment of comparison, and watching how casually Graham and Bruton delivered song after song, Sanders says he began feeling only slightly better than average.

"It was part humbling, part encouraging," says the 25-year-old singer-songwriter. "I can't wait 15 more years so I can write great songs like Jon Dee. I'll have 15 more years to write about, and that's inspiring. As a songwriter, I'm not bummed out that I'm not 21 and famous. I'm inspired by all the older songwriters who have better, or frankly, just different, things to say."

Despite the circumstances, Sanders says his Too Many Guitars experience left him feeling no more or less ready for a shot at a larger local or national spotlight. This was just one temporarily humbling gig, and he's not exactly what you'd call a humble guy. Sanders isn't shy about admitting he has a "great" voice, "great" songs, and that with the right budget, he could make a "great record."

While those kinds of proclamations don't necessarily jibe with a guy who sings in a whisper, and until only recently, performed sitting down, Sanders connects with his audience like Jeff Buckley or Chris Cornell. His songs may be moody, complex, and sometimes just plain slow, but the people that get 'em really get 'em.

"That Too Many Guitars show was packed with people who had no fucking clue who I was," says Sanders. "And to have total strangers come up to talk to me after the gig -- after they've just seen eight other musicians that pack clubs and get great press and radio play -- is pretty cool. To have them say, 'You were amazing, I love what you're doing' is fantastic. Those are the people you play for, and those are the people that keep you going."

If Sanders made a big impression at Too Many Guitars, he made it without help from a crucial element of his word-of-mouth buzz -- his all-star band. Since Sanders began playing local clubs regularly four years ago, he s consistently played alongside a who's who of local A-list players: drummers J.J. Johnson and Chris Searles, bassists Edwin Livingston and John Thomasson, organists Michael Ramos and David Boyle, and guitarists Billy White and Darwin Smith. Sanders doesn't pack houses and yield big paydays for his bands, but he's clearly become the local musician that musicians tell their musician friends about.

In the beginning, musicians played with Sanders for free because they believed in his songs and performances, even if Sanders didn't know how good he had it; back in '96, when bassist Brian Walsh took an early interest in Sanders and started introducing him around the scene to folks like his former Soulhat bandmate Bill Cassis, Sanders wasn't even sure who Soulhat was.

"I didn't really know who they were, or even what they sounded like," he admits. "I just knew they were popular."

At the time, Sanders had been in town only about a year, so not recognizing one of Austin's most popular bands isn't necessarily embarrassing. Neither is it terribly surprising. Sanders has never been a big music buyer or clubgoer, and says his El Paso childhood was decidedly nonmusical. There were no large record collections in his parents' household, and he didn't so much as pick up a guitar until the 10th grade, when his father bought him lessons on a whim.

Sanders says the lessons taught him that he liked songwriting more than guitar playing, and didn't lead to much besides an on-again, off-again, garage band. After the old have-gig, no-singer story set in, Sanders stepped behind the microphone, but after high school, he also realized his future was probably brighter as a University of Texas business student than a singer. Make that almost realized.

"I wanted to get the hell out of El Paso like every other kid, but right before I was supposed to leave for Austin, I met this guy in a band," recalls Sanders. "He was the first guy I ever knew that had his own band, and he knew someone with a recording studio. I thought we were going straight to the top, so I backed out of school. Of course, the guy wound up being a flake."

After a year and a half at the University of Texas at El Paso, Sanders moved to Austin. He brought with him a few friends from his first real band, Jaguar Sun, and used Chronicle ads to round out the lineup. Although Jaguar Sun had no trouble finding low-paying gigs, it wasn't until an unsanctioned SXSW 95 showcase at Fat Tuesdays that they made any headway. There, Sanders met a rep from a New York management firm, quickly signed a deal, and got the old "love you, hate the band" speech just after the ink dried. Within a year, Jaguar Sun imploded on its own, and the management team took over Edel Record's American operation and hardly noticed when Sanders left his contract.

Enter Walsh, who introduced the newly solo singer-songwriter to his friends. It was a step inside a scene Sanders says he didn't even know existed, and before long Cassis, Johnson, Livingston, and Brian Standefer were on board. Sanders' band may have been full of musicians that made their living primarily at Steamboat, but Sanders always seemed to fit better with the musicians than the scene.

"I'd have two guys from Soulhat or the core of the Billy White Trio behind me, but I was never a Steamboat guy," admits Sanders. "To this day, Danny Crooks has never said so much as hello to me."

Guitarist Billy White was much more forthcoming, volunteering to produce both a six-song demo and Sanders' self-released debut, Tierra, which came a year later in 1998. Tierra may not have had many obvious hooks or catchy choruses, but it unveiled a perfectly moody voice and a flair for complex songs with compelling, often downright somber, narratives. And while it was neither pop nor folk, it deftly rode into AAA radio territory and offered enough word-of-mouth buzz for Sanders to draw respectably at Ruta Maya, the Cactus Cafe, and the Saxon Pub. For what it's worth, Tierra even landed Sanders a Top 10 finish in the 1999 Austin Music Awards singer-songwriter category -- ahead of all the Too Many Guitars participants.

A self-admitted "computer geek," Sanders credits his day job as the last part of the puzzle, the songwriter having bounced around Austin's high-tech community -- FG Squared, Dell, NetSpeed, and now NetAppliance -- since his 1996 graduation, absorbing important lessons on marketing, media plans, and product promotion that his day jobs have offered. He's been through lucrative IPOs and acquisitions (investing the results in studio time and paying his live musicians), but Sanders is sure he ultimately wants to pursue music, not the Net.

"Not a day goes by that my passion toward music doesn't grow stronger," he asserts. "I always hear musicians coming back from a tour complaining. I can't understand it. It's like, you're driving around the country playing music and I'm stuck in a cubicle and you don't even know."