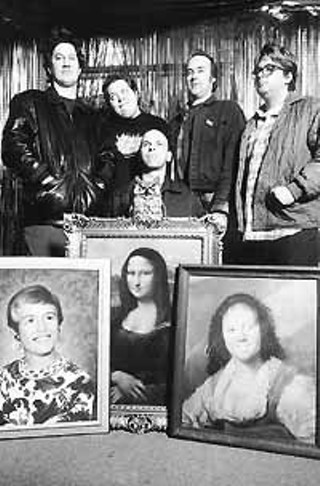 What's in a name? For a band, a lot. It's their lettered identity and literal calling card. The name should be catchy, but not too long. Original, but not obscure. It helps if it has a double meaning, or if it gets a chuckle. So when five veteran Austin musicians got together to brand their new cosmic dance-rock combo, they compiled a huge-ass list of potential names, ultimately choosing Pong. Pong has many meanings. In England, it denotes a uniquely disturbing smell. It can also refer to the People of Northern Greenland, and it's a nickname in Thailand. Then there's the old-school computer table tennis, a simplistic Seventies electronic game where the controllers only move up and down. How did Pong beat out the hundreds of other possible band names?

"The name fits the retro-futuristic kind of mood we're in," explains guitarist and vocalist Gary Chester.

After releasing a handful of albums and touring the U.S. and Europe, Ed Hall -- like their last label, Trance Syndicate -- called it quits in 1996. Personality clashes didn't break up the band, but rather the familiar story of years of hard work with less-than-desired rewards. Bassist Strub moved to Thailand for a few years and taught English. Chester stayed in town, playing with Moist Fist and fashioning Gold, the band that became Pong. Hardy played in other local bands, including the Goin' Along Feelin' Just Fines. Where did Craig and Shelton fit in with the Ed Hallians? Shelton was a Moist Fist mate of Chester's, and Craig took a more aggressive attitude:

"I approached Gary after Ed Hall broke up and said, 'Whatever you're doing next, I'm in it!'" laughs Craig.

The comparisons are inevitable, but Pong is much more than Ed Hall: Phase Two. They're a new group with new members and new songs. Perhaps because they're in the best position to judge, the two non-Ed Hall Pongers are first to explain how.

"I loved Ed Hall," says Shelton, "but the music in Pong is a lot different."

"For one thing," adds Craig, "there's more concentration on vocals."

"In Ed Hall, if there was an obvious hook, we'd be like, 'Well, we've got to change some of those notes!'" exclaims timekeeper Hardy.

No longer. Due to their Ed Hall legacy, Pong was asked to play a Velvet Underground Hoot Night at the Hole in the Wall a little over a year ago. The still-developing band worked up four VU covers for a gig that became their local debut. One of those tunes, "Ferryboat Bill," remains in their set list, yet the song has been Pongified far from its original VU version. The song has transmogrified into what the band now calls "Bushwick Bill," a nod to Houston rappers the Geto Boys.

"I don't know if I'd recognize it," says Strub shaking his head.

As it turns out, refashioning VU songs had a lasting impact on Pong.

"Actually, most of our songs come out of the fact that we did a VU cover," explains Shelton. "We wrote about 100 songs out of that. Then we tried to do a Soft Cell song ["Sex Dwarf"]. And even though we didn't do it, we stole things from that, too."

"David Bowie should be next," he exclaims.

In fact, Pong's musical influences span a whole spectrum: Kool Keith, the Orb, Kraftwerk, Black Sabbath, Beach Boys, Minutemen, Brian Eno, Mouse on Mars, Talking Heads, Can, the KLF, Devo, Beastie Boys, and the Meat Puppets. Fitting their retro-futuristic aesthetic, the instrumental catalyst for Pong is an inexpensive, Radio Shack-brand Realistic mini-synthesizer. It's a simple keyboard that might have been cutting-edge technology the week it was introduced, but today it's Shelton's main tool -- responsible for several of Pong's tripped-out melody lines.

All told, Pong's melodies are prominent, and the beat more danceable; it's different from the dissonant harmonies Ed Hall nearly perfected. It's as if the band uses their musical powers for the benefit of groove, instead of weirdness.

"Melody is missing from society," opines Chester. "So we have this mission to put melody back in society."

"The quality of the noise is friendlier," he opines. "It's still kind of noisy, but before it was more aggressive. There's still weird noises, but they're funnier and nicer. It doesn't take as long for you to get to know them."

And as any band knows, ladies come along with melodies and grooves.

"You know what's good about Pong?" Strub asks directly. "It's that girls like it. When the women are dancing, the world is right."

Since Pong is composed of veteran musicians (combined, they've been in at least 25 bands), the quintet understands the time and work needed to get a new group up and running. They rehearse at least twice a week, play out every few weeks, and record whenever financially feasible. Currently they have nearly a dozen songs on deck and are knee-deep in the developing stage of an EP.

Recording at South Austin's Bubble studio, that of their friend Sixteen Deluxe guitarist Chris Smith, the group views rehearsals as opportunities to write songs. Of course, the way Pong writes songs takes a little longer. The whole band writes songs. At once. No one brings a tune in for the rest of the band to learn; songs come from jams and interesting riffs. The lyrics are often at first abstract vocalizations by whoever feels possessed to step up to the mike at the time. Creative democracy sculpts the song. Or, as Craig puts it, "the song creates itself."

Pong hopes its EP will attract attention from someone willing to infuse the band with enough capital to record a full-length album. As it is now, Chester says every show pays for more recording. Which, in some respects, may actually be a good thing.

"That's the beauty of Pong," says Strub. "We're not in a hurry anymore. We're more about quality."

Checking out the band's rough mixes prove the point. "Incapacitated" is a toe-tapping disco-rock jam that announces "aliens have landed at the White House, California has fallen into the ocean," that last word delivered in a fatalistic falsetto drop. "Foot Foot" begins with Stonesy "whooo-hooo" harmonies mixed with Warm Jets-era Eno vocals and an upbeat rhythm. The flowing, flowering intro of "Bubble Jungle" morphs into a cavernous shuffle groove, full of melodic stalactites and weird vocal stalagmites. Pong songs are often like Dali paintings, at once organized, inviting, and scary.

The band performs regularly at such local establishments as Emo's, Stubb's, and the site of their South by Southwest showcase this year, the Red Eyed Fly. As every Austin musician knows, a regular local gig is different than a SXSW gig at the same place. Pong deals with the conference using two approaches, real and ideal.

"It'd be nice if we got some label interest, someone to fund our record," says Craig.

Band members have been around long enough to witness SXSW's transformation from an Austin band showcase to a headliner-driven conference. No question Pong would love to walk away from the conference with a contract. Regardless of what does or doesn't happen for the band at SXSW, Pong has both the creative energy and experience to take their rocky space-groove message to the masses. Certainly their name will help.

And it seems as though their luck in naming things continues. They don't have a final name for their EP yet, but Hardy asked Megahal, an artificial-intelligence gibberish generator, what it should be called, plugging in some key words. The program came back with "smells like table tennis."