You could tell something was happening just from the people walking up the sidewalk. It was in the air. And on the sign: Scottish Rite Temple -- of Freemasonry! Hmm, yes -- quite -- but who were all these smelly children, and was this their idea of dressing up for the symphony? Well, yes -- for this symphony. Brown Whörnet's Peter Stopschinski, one of the evening's two featured composers, wore a suit as keen as his ear-to-ear grin, but somehow you missed seeing him in that same sweat-soaked T-shirt he's worn dozens of times as his band tore through the chaos of their progressive punk rock. He best of all represented the evening: Emo's goes to the Symphony. Its mastermind, Golden Arm Trio's Graham Reynolds, also wore a suit of smiles, decked in his best thrift-store plaid and playing host to a full house of Red River regulars filing in past the sign proclaiming Turner Hall established 1871. As with the 10pm performance, people had to be turned away. Without a note having been played, the evening was already a grand success. When Tosca String Quartet's Leigh Mahoney joined her 40 classically trained colleagues on the high school gym-cum-Legionnaire's hall stage, all 300 live music scensters present abruptly shut up. And stayed quiet; the evening's program stated there would be "ample coughing time" between movements, and damned if the full house (including the balcony) didn't adhere. Stopschinski's "H.D. Symphony" received said silent treatment first, UT student conductor Ludek Drizhal flipping a thick schlock of blonde hair off his forehead as the sound of the orchestra came up with his rising arms. As strings glided over a swift current of reeds, visions of grade-school excursions to see Peter and the Wolf or The Nutcracker doubtlessly danced among more than one audience member's memories. If not, they sat there rapt, anyway. During Stopschinski's third movement, "The Battle," the composer's complex, difficult piece came together, a marsh full of reeds hiding the flutes as the string section blew through like a pre-storm rain. The fourth and final movement, "Life as Birth" came alive with the Tosca String Quartet's featured bow and Drizhal's animated conducting. The applause that followed could have been for Fugazi: proud, pumped-up -- alive. Taking his bows while announcing a 15-minute intermission, Stopschinski looked as if he'd just won the Nobel Peace prize. Certainly Graham Reynolds deserves some sort of award, his own simply titled "Symphony" mirroring the Golden Arm Trio's free-spirited abandon the same way Stopschinski's symphony echoed his band's harmonic complexities. Like several of the string quartets included on the Trio's marvelous new CD, Why the Sea Is Salt, Reynolds' symphony brimmed with wistful beauty, the sweep of the music as carefree as its movement titles: "Pretty Movement," "Breath Movement." By the time his ninth and final movement ("Evil March") ground to a halt, there was only a second standing ovation left, Reynolds and Stopschinski sharing a bow with Drizhal and then a an embrace. Well, that and a final announcement from the composers: "We have both our band's CDs for sale in the lobby. ... " 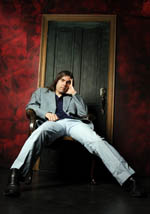