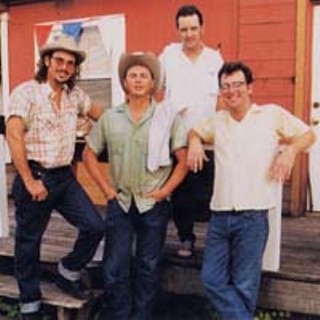 The Andy Griffith Show always had a penchant for music. Mayberry mavens will recall the sheriff himself strumming an acoustic guitar and crooning hymns on the front-porch swing. No Andy Griffith fan worth his bib overalls can forget Barney Fife's reedy voice struggling with "Ave Maria" only to be trumped by Gomer Pyle's operatic baritone. Deadpan hillbilly screwballs the Darling family would appear every so often to rip up some bluegrass, and once, James Best, The Dukes of Hazzard's immortal Roscoe P. Coltrane, guest-starred as a Merle Travis-style fingerpicking guitar whiz. Hell, even Opie had a garage-rock combo once he hit puberty. Only a true Andy Griffith Show devotee would recall Rafe Hollister, however, and the Hollisters' Mike Barfield is just that sort of aficionado. "There was one guy named Jack Prince, he was on about four or five episodes -- he played a moonshiner named Vince Sewell, then he became Rafe Hollister," explains Barfield. "He was in an episode where the mayor and his wife had a music hall and he came to the sheriff's office and tried out. He was a big, stocky guy, with kind of a big face, had this real operatic voice. That's how we came up with the name."

It's in Houston and not Mayberry that the honky-tonk Hollisters began 10-plus years ago as the Rounders, playing self-described twang-rock. Barfield and guitarist Eric Danheim cut a swath through the Austin/Houston club circuit with a rocking country sound back when "No Depression" was still just a Carter Family song and "country rock" meant mopey songs about girls, sunsets, and no-named horses.

At roughly the same time, Denny "Cletus Wollensak" Dale was thumping a stand-up bass with bespectacled Houston weirdo Webb Wilder & the Full Grown Men, while over in Atlanta, skinbeater Kevin "Snit" Fitzpatrick was playing pickup gigs with the likes of Chuck Berry and Bo Diddley. When Danheim trekked to Austin to put in mileage with the Wagoneers, he was replaced by Freddie Cisneros, and later, an accordion player.

"The Hollisters are more of a rootsier, country sound, where the Rounders were more rocking," explains Barfield. "Plus, the accordion guy was Czech, and he had the polka thing in his blood, not like the Mexican or Cajun guys."

By 1994, the Wagoneers had run into a ditch, and Barfield and Danheim crossed paths again back in Houston. Fitzpatrick and Dale wandered into the mix, the band took up their Mayberry moniker, and the Hollisters began stirring up the Bayou City twang scene. In 1997, Austin's revered roots indie Freedom Records released the band's first CD, The Land of Rhythm and Pleasure, and the band toured relentlessly behind it -- rewarded by the disc hitting the Gavin Americana charts. The Land of Rhythm and Pleasure also brought the band favorable attention from No Depression and other magazines. Last summer, they signed with Oakland, California's HighTone Records and brought in local guitarist Casper Rawls to produce their label debut, Sweet Inspiration.

"To me, Casper's a studio ace, as far as acoustics and meter and things like that," notes Barfield. "If you try to describe something you're going for, whether it's an obscure blues reference or country or whatever, he'll know what it is and latch onto it, because his influences are similar and he's coming from the same place. He understands the beast."

Brimming with Barfield's baritone and Danheim's shimmering guitar work, Sweet Inspiration is a solid piece of work. There's nothing better than finding a versatile pickup drummer to drive a band, and the rhythm section is as solid and dependable as a '63 Dodge. Producer Rawls, who also plays on a few cuts, zeroes in on a Holy Grail of Telecaster tone, with sheets of rhythm laid over the top and substantial riffage moving things along. Along with Rawls' guiding hand, the band adds local players Champ Hood (fiddle) and Earl Poole Ball (piano) to the Hit Shack sessions.

"[Ball] put in the Baldwin electric harpsichord parts on that last song," says Barfield. "The guy's such a gentleman, he's so nice, and he's been around and seen it all. He's got such a cool style, there's not a lot of people like that who are still that vital and can play it like that."

Sweet Inspiration draws on a few obscure covers to round out its Johnny Cash/rockabilly/roots-rock/honky-tonk stew; longtime friend Ted Roddy supplied the sneaky "Love Rustler" (along with Tom Clifford), while the pure-D rockabilly bop of "Little Old You" came courtesy of Wayne Walker, a songwriter who also penned material for Webb Pierce and Lefty Frizzell. Perhaps the most arcane of the lot is "Walk 'Em Off," a minimalist blues shuffle originally done by Fifties Houston honky-tonker Eddie Noack. Noack went on to record with Pappy Dailey, onetime George Jones manager and co-founder of both Fifties label Starday and later D, the label that launched George Strait.

Though the Hollisters' version stays fairly faithful to the original's loping beat and tremolo guitar, Barfield says he wishes the band had that one to do again. "I keep thinking about the original version which had a piano," he laments. "I wish we could have had Earl in on that." One of the more compelling tunes is the dramatic, swampy "Sugarland," which with its female backup singers (Rawls' idea) calls to mind Seventies Elvis and even Tony Joe White.

Since the album's recording, things have changed somewhat for the band. Danheim packed up and moved to Seattle when his wife accepted full-time employment at Amazon.com. The band's new Fender-bender is Austin's Chris Miller, a Wayne Hancock/Marcia Ball veteran who can readily switch over to pedal and lap steel. In no time flat, the new combo was on the road living out of a van. No indication if Mayberry is on their itinerary, which is just as well, because if Barfield thought Rafe was a handful, Barney Fife would positively fume over these Hollisters.