Collapsing Beams at the Mercury, Asleep at the Wheel Beams into Your Home, SXSW Marches On 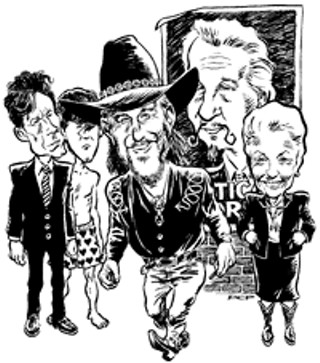 The Mercury Is Dropping!

I'm not talking about the cold front here, either; the Mercury Lounge, recently relocated to its larger home above Jazz in what was known during last year's South by Southwest music festival as the Bon Temps Room, found itself temporarily ousted this week after a support beam under their floor cracked. Ironically, the crack resulted from the addition of sprinklers to the restaurant downstairs. "It's the stupidest thing I've ever heard of," says Mercury man Mark Collins, relating the tale of how the crew installing the fire safety equipment drilled holes in the building's support beams to facilitate the sprinklers' installation! Needless to say, the fire marshal immediately declared the building unsafe; the whole situation looked so suspicious that I was half-expecting to see Carole Rylander leading TV crews in and ranting about how unsafe Austin's live music venues are. While the floor is in no immediate danger of collapsing, Collins says "you can see the floor sagging" and that risking bringing people in before the entire shebang is replaced would be foolish. What was to have been the club's grand opening will now take place at La Zona Rosa this weekend with the Roy Hargrove gigs (see Music Listings) having become "kind of a benefit of sorts" for the club, though it's the Jazz folks who will be footing the bill for the repairs to their building. The Mercury expects the floor to be replaced in two weeks (good luck!) and has rescheduled its official grand opening to be a February 17 show with the Groove Collective.

Asleep With the TV On

Between Sandra Bullock, Asleep at the Wheel's potential Grammy sweep, and the impending SXSW conference, look for Austin music to reach a crescendo of national television coverage in upcoming weeks. Believe me, now's a great time to start a band with an outrageous, TV-friendly gimmick. Both the Wheel's Ray Benson (with Lyle Lovett and Shawn Colvin) and Bob Schneider were recently excised from the Late Show schedule due to David Letterman's heart operation, which left the Wheel to roll over to Conan O'Brien's Late Night instead on the same date the Letterman appearance was originally scheduled (2/9). Meanwhile, Bullock beau Bob made a visit to Jay Leno on Tuesday night, and one trusts that his lackluster performance on that show won't deter Early Show host Bryant "I've Got My Own Women Troubles" Gumbel from going through with Schneider's scheduled appearance on this Friday's program. Look also for an appearance by Benson and company on the Early Show Feb. 18, where they'll be singing "Roly Poly." That precedes Benson taping Bill Maher's Politically Incorrect on Feb. 21, which puts him in the illustrious company of previous Austin guests like Gibby Haynes (currently on display in the new Kid Rock video), Lyle Lovett, Miles Zuniga, and Ann Richards. Finally, Texas Terri Laird has been seen recently on an oft-repeated E! special, proving that a sure way to get television exposure is to put "Texas" in your name even if you make your home in California!

Daniel Johnston recently called to see if I could find out if he got a good slot at SXSW this year, and after doing a bit of eavesdropping, I found that they were looking into having him headline an evening of showcases with the likes of Mark Eitzel and John Cale. I wouldn't complain if I had been dropped into that showcase, though officially, Cale, who will make an appearance at the Austin Music Awards as part of the Alejandro Escovedo-helmed Sterling Morrison tribute and will be on a SXSW panel on his late Velvet Underground cohort, isn't confirmed as far as that particular showcase slot is concerned. It's a curse, though, with SXSW, that no matter how many great names come down the pike, we in the press want to be the first to snoop out even better ones. SXSW director Roland Swenson "put in a call to Michael Corcoran to find out exactly where and when Patti Smith is playing," cracks one staffer, after the American-Statesman columnist suggested that Jody Denberg had been working on getting the legendary songster to visit the Festival. It's hard to come up with a year when the cool names ran more freely than this time around, as seen in previous columns and at http://www.sxsw.com. This week, those serious about music will be happy to add Cale to their list, while those with their tongues firmly in cheek will likely put them in their grandmas' mouths out of the sheer joy of finding that the homophobic/philiac Frogs are scheduled to bring their twisted breed of folk music to SXSW 2000. Some more names to add to your checklist this week include: Baby Lemonade, Brave Combo, Chuck Prophet & the Mission Express, D.D. Wallace, Fu Manchu, Gaza Strippers, Gluecifer, the Jayhawks, Junior Varsity, Kevin Welch, Love Love Straw, Lower Class Brats, Nashville Pussy, Peglegasus, Peter Case, Royal Crown Revue, 7% Solution, Sugar Shack, ThaMuseMeant, American Analog Set, Mekons, the Mr. T Experience, Silos, Wan Santo Condo, Trail of Dead, and Hank Williams III, who just last week told us he wasn't gonna be able to make it!

Jimmie Vaughan's manager Corey Moore says he doesn't have any information to share about the new album from JLV's late brother Stevie Ray Vaughan. In fact, he says he'd never even heard about Blues at Sunrise (due 3/21) until I mentioned it, but adds that the folks at Epic don't necessarily have to consult Jimmie about every move they make with the SRV tracks they own. As such, I'm not sure what the big rush was with Sunrise, another comp featuring such not-that-exciting "previously unreleased on CD" tracks like the version of "Texas Flood" from the Live at El Mocambo video, a Couldn't Stand the Weather outtake ("The Sky Is Crying"), a live Montreaux track ("Tin Pan Alley"), and liner notes by Bill Bentley. And no, Moore says Jimmie hasn't heard anything from the label about the fabled box set in a good while. In upcoming months, though, look for the new Double Trouble album, and expect news regarding the teaming of Jimmie and Artemis Records.

If you're like me, you'd turn to stone if you were asked to join the Electric Light Orchestra onstage for a gig, and that's exactly what happened to Offended Homeless drummer Ric Furley last week (the gig, not the petrification). Furley performed on timpani with ELO II last weekend as a member of the Corpus Christi Symphony at the sold-out show, the band's sole Texas date and their only U.S. appearance with a symphony orchestra. How did Furley end up in such a unique position? His mom happens to be the symphony's manager and she couldn't locate a percussionist, so out of the blue she decided to call her son and see if he wanted the job... If you watched the Super Bowl last week (I didn't), you heard Jon Blondell during a commercial for, as he puts it, "one of those dot com things." Blondel candidly admits that there's big money to be made in Super Bowl commercials -- unless you're doing the music. He says he cleared about $300 on the deal, so to stay afloat, he continues to do session work and has upcoming gigs with the UT Jazz Ensemble, as well as the completed and due in April Willie Nelson blues album. This Sunday you can catch Blondel in a battle to the finish with trombone master Bill Watrous as part of "Bones in the Basement" at the Elephant Room... The music industry continues to take notice of Dynamite Hack, with Hits noting that the band's February 5 show at La Zona Rosa is expected to bring a "weasel infestation second only to SXSW," and that the buzz has it that the band will be signed by the time the festival begins. And did you know that both Fastball's "Out of My Head" and Sixpence None the Richer's "Kiss Me" are still in the Top 10 of Billboard's Adult charts after 42 and 45 weeks, respectively?! At this rate, the former could quite possibly still have a hit single on the charts when their next album debuts in April... The always astonishingly cool Norton Records label has a new out-of-the-blue release as well, San Antonio Rock, culled from the vaults of the local Harlem, Warrior, and Satin labels. A 1957-61 roundup of Doug Sahm's early 45s and demos, San Antonio Rock also includes rare tracks with Sahm as a sideman, as well as interviews, bio info, photos, and session data for the pre-Sir Doug Quintet recordings. The release date is listed as "SXSW 2000," so to fill your Sahm needs until mid-March you'll need to head to the Hole in the Wall on Feb. 10 for that venue's turn at the Doug Tribute, featuring Gourds, Texas Mavericks, Nortons, etc... The latest project among many at Sixteen Deluxe's studio the Bubble is the Applicators' new album with Bad Religion/Circle Jerks man Greg Hetson at the controls. I haven't heard the band, though a cohort tells me they seem like "they want to be Morningwood, but they sound more like the Individuals." Hmmm, could it be a coincidence that former Individual India Taylor (suggested autobiography title: I Was an Individual Until I Went Solo) has a new star-studded album out?... For the SIMS Foundation benefit at the Warehouse Saloon & Billiards on Feb. 21, the public, with a $10 donation, gets to play pool with local musicians and hear them play. Organizer John McConnell is looking for musicians who really like to play pool (in other words, he's trying to get Joe Ely to show up). Call him at the Chronicle, 454-5766x143... Look for Bruce & Charlie Robison and Jack Ingram to release a live document of their touring shows together, and note that in addition to the audio taping of the Alien Love Child three-night stand at Antone's last weekend, two of the shows were videotaped as well. According to Eric Johnson's manager, Joe Priesnitz, the second question record executives ask is "Is there any video?" My guess is that the first is "Is there any audio?" ...