Austin versus Islam, Freedom and Justice (Records) for all, and that damn Ray Benson again. 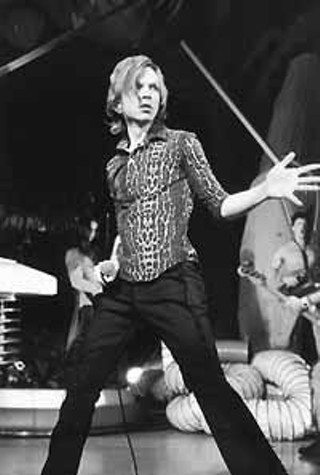 Beck at the Austin Music Hall (Photo By John Carrico)

It was one of the most anticipated shows of the new year, but given the lack of publicity for the quickly sold-out show and the early nature of Austin Music Hall shows, almost no one knew to show up at 8pm sharp on Tuesday to see Hank Williams III open for young Beck Hansen. Of course, true early birds had already seen Beck's sideman DJ Swamp doing his thing at the Flamingo Cantina the night before (though we didn't spot Beck himself there), and fans of Wayne Hancock have previously caught Hank III making brief appearances at the Continental Club with his good buddy Wayne, but it's safe to say no one was ready for the blast of dynamite provided by Williams and his band, which included Duane Denison on guitar, sounding as Jesus Lizard as ever. Heavier than the Reverend Horton Heat (who Williams will open for next), yet more country than most anything else out of Nashville (HWIII's current home), the band is just the sort of thing we could use more of in Austin, but unfortunately Williams tells the Chronicle, "I'd love to move to Austin -- but I can't afford it." Hank wowed what crowd was there, anyhow, as did Beck himself after the venue filled to capacity, mounting a big production and belting out all the hits from "Loser" to "Sexxlaws" -- a far cry from his first abortive Austin show at South by Southwest '94, where he broke his drum machine so that it kept playing the wrong beats, and which I reviewed at the time as, "Beck? Blecchh!" Later at the Continental, Williams made another appearance with Hancock as both joined an awed Dale Watson onstage for three Hank "Senior" tunes -- including a priceless "My Bucket's Got a Hole in It" -- followed by a 20-minute set with his own band. I don't know where Beck ran off to, but I assume he partied into the night at one of the local dance clubs?

"This is what I've been trying to do for five years!" says David Thomson of SXSW 2000's hip-hop lineup. Giving credit where credit is due, he cites the work of Austin's Hip-Hop Mecca crew for helping bring things together, adding that festivities will be very different from previous years on this front. For one thing, the multi-staged Bob Popular will not be the centerpiece of the rap and related music showcases. "They just didn't want to be involved this year," says Thomson, who has spread things out this year so that the genre will be present at Velvet, Mercury Upstairs, the Back Room, Stubb's, and even Ruta Maya, with at least two showcasing clubs per night. Among the better-known act expected to attend are Black Eyed Peas, Jurassic 5, Arsonists, Blackalicious, South Park Mexican, Jungle Brothers, and to put it bluntly, Cypress Hill. If hip-hop ain't your bag, try out a few of these names: Man... Or Astroman?, Supersuckers, Giant Sand, Grandaddy, Harvey Danger, Joe Pernice, Gomez (the European one, not the local Misfits cover band), Roger Clyne and the Peacemakers, Fastbacks, Eric Mingus, DJ Me DJ You, Stan Ridgway, Dylan Group, Bernie Worrell & Woo Warriors, High Rise, Bevis Frond, Antiseen, Papas Fritas, Screaming Trees, Pat Dinizio, Elliott Smith, the Stone Temple Pilots, and former Led Zeppelin bassist John Paul Jones. Do those names add up to a $75 value? If you think so, you've got one month to save up the cash, as wristbands go on sale at that price on February 24, with the price jacking up to $95 on March 10 or after the $75 ones sell out, whichever comes first. For more info, check the Web at http://www.sxsw.com, e-mail sxsw@sxsw.com, call 512/467-SXSW, or throw open your kitchen window and yell, "SXSW!"

The Wrath of Farrakhan

Q: What do you get when you cross Nation of Islam leader Louis Farrakhan with a calypso album? A: Trust me, you don't want to cross the Nation of Islam, period. That's what "Steve" (not his real name) from Bostrox Records -- a spinoff of local label Jarrett Records -- is finding out, though he insists that the label's only release, The Charmer Is Louis Farrakhan: Calypso Favorites 1953-1954, was "done in such a way that I don't think it's offensive personally." Since the CD, compiled from three albums the young Farrakhan recorded in the mid-Fifties, first appeared in October, however, The Charmer has been fodder for jokes both in print and on the tube. It's also attracted attention from the Nation of Islam's attorneys, and "Steve" admits there's "a real concern" for his safety, as he wonders aloud how many followers of the presumably unamused Farrakhan might want to take misguided action against him. Fortunately, he says recent calls from the Nation of Islam's attorneys have softened in tone. In their latest contact, the caller actually seemed to "like the way [The Charmer] was presented in a historical perspective." Marcus Trejo, an African-American friend of the white Bostrox crew who is acting as an unofficial consultant in the matter, is not as charmed by the disc, stating that "the bottom line is a couple of white boys put this out thinking it was funny. I'm no fan of Farrakhan, but I didn't think it was fuckin' funny. It looks like a 'darky' joke to me!" Beyond the matter of taste, there would appear to also be legal questions concerning the rights to the recordings, which were taken from vinyl copies of Farrakhan's original albums; "Steve" will only say that the company's lawyers have "ironed out all possible legal situations to the best of their ability." Currently, the album is the sole release in what Bostrox calls its "Black Heritage Series," but "Steve" insists again that there is no joke at work here, saying that some early Aretha Franklin masters are likely to be the next entry in the series. Meanwhile, he's keeping an eye open for angry Muslims and hoping all will be ironed out soon. "The last time we called the Nation of Islam's attorney, we missed him," says Trejo, "Maybe it's because we called on Martin Luther King Day."

What's with all the activity among local labels lately? Who knew some of these ventures still existed? In the past weeks and months, though, everybody's either shutting down or movin' on up and inking new distribution deals. In the case of Austin's Freedom Records, who've put out a number of fine releases from a coterie of locals (Beaver Nelson, Prescott Curlywolf, Derailers, Jon Dee Graham), unhappily, it's the former. The labels' upcoming release by El Orbits (see "Live Shots") will be its last, says founder Matt Eskey, the reason being that he's simply tired of the thing. That's tired as in exhausted, though; Eskey says that Freedom "wore me down because I was doing it all by myself." As such, though the company's catalog will remain in print, Eskey is focusing his attention on Texas Music Round-Up, the local mail order outfit and distribution alliance he co-runs with David Sanger's Lazy S.O.B. Records and Chris Wall's Cold Spring Records (check the Web at http://www.texasmusicroundup.com).

Meanwhile, up Houston way, Justice Records (how come all these labels sound like their biggest star should be Francis Scott Key?) has announced its new distribution deal with Buddha Records, known of late for their Original Masters series featuring Willie Nelson, Billy Joe Shaver, Waylon Jennings, and other renowned country stars. Since the Justice catalog contains work by Nelson and Jennings as well, Buddha reps say the two labels "complement each other perfectly." Besides reintroducing the existing Justice back catalog to the world, the deal has produced a new offspring, an upcoming album by Ray Price scheduled for an April release. So, now I gotta wonder: What's up these days with Rabid Cat Records?

Exactly what's to happen is still uncertain, but it's definite that Charlie Robison is moving up one way or the other. Still up in the air is whether he'll be bumped up to Columbia from Lucky Dog or whether the next album will be a split Lucky Dog/Columbia imprint deal, but in either case, the Dixie Chick's other half has been officially given a big budget to make his next album a proper major label level endeavor. The label/labels is/are hoping to have that album out before the end of the year... Brother Bruce Robison and sister-in-law Kelly Willis are officially back in the SXSW running, having pulled out of the March music festival in Amsterdam mentioned in previous columns. Another concurrent fest has popped up, though, this time in Melbourne, Australia. Assume you won't see Sixpence None the Richer at SXSW, as member Matt Slocum will be down under, as will Lee Roy Parnell, so don't look for the Texas Tornados either -- if there still is a Texas Tornados!?! What's definite is that Doug Sahm's posthumous country album is on the way from Tornado Records, and that neither Bob Dylan nor Willie Nelson will be on it. Working from suggestions by Sahm, Bill Bentley says he tried to get the guests to add tracks after Sahm's death, but Dylan couldn't do it for another six months and the Willie thing just plain didn't happen. "Doug doesn't need anybody's help anyway," concludes Bentley. Next up, he's looking for a Texas label to distribute a proposed Sahm tribute album. Justice Records, are you listening?... Still not enough Sahm for you? Then you'll be wanting to know about the big Doug celebration at the Continental Club this Sunday, featuring sons Shawn and Shandon, plus Lou Ann Barton, Augie Meyers, Paul Ray, Texas Mavericks, LeRoi Bros. and many more... Broooose fans already know this, I'm sure, but Bruce Springsteen & the E Street Band have confirmed a date at the Frank Erwin Center, Monday, April 17, with tickets going on sale next Saturday, February 5... I know you're all looking forward to Herbie Hancock's scheduled upcoming appearances at the One World Theatre, but I'm afraid at this point you'll have to wait a little longer. Chronicle/KUT jazzman Jay Trachtenberg recently ran into Hancock in Louisiana and was told that a problem had come up with the shows; apparently an agent had taken the contract and cashed the five-figure deposit check from the nonprofit One World, and then failed to notify the artist of the dates. One World's Hartt Stearn spent several frantic days last week arranging conference calls in the hopes of clearing up the confusion. It turns out Hancock was very upset over the miscommunication, but he simply couldn't manage to make it to Austin on such short notice for the sold-out February 4-5 shows. Stearn says the gigs are being rescheduled for the last week of May... Best music quote I heard this week? It's a tie between one from Rich Malley after hearing Eugene Chadbourne play last weekend ("It's like Tourette's Syndrome coming out of an instrument!"), and this gem from a report on one of the cable news networks: "Geffen Records is seeking litigation to prevent Courtney Love's Hole from being exploited by other labels"...