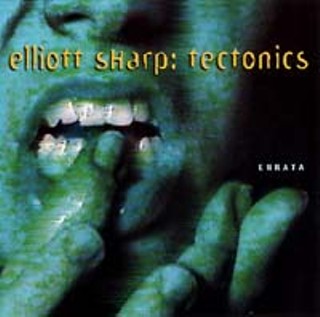 It's major construction on a grand scale, not quite to that of those plates under the continents, but worthy of the name. Tectonics is Elliot Sharp & Co., and "Co." can mean so many things in the world of this avant-snazzz collaborateur of New York's razor edgy art-jazz scene. In this case, there's some wild harping Zeena Parkins and some badass Vernon Reid, but because the cover credits are as amorphous and vague as the music itself, it's tough to tell where and when. Like moving land masses, this shit's all over the place, like the synthetic clarinet-sax laden "Noospheric" with its cobra vs. the mongoose wiggly dance, and its big-bottomed follow-up, "Goomy." The whole album is littered with enviro-canvasses of harmonic divergence and really impossible-not-to-move-to beats. In a lot of ways, this is advanced calculus to us great unwashed New Math strugglers. Not that Errata is too brainy or inaccessible; on the contrary, as with Philip Glass, it's just a matter of time before some Sharp ripped riff hits the latest slew of car commercials. There's a sort of logic to the construction of these pieces, and knowing Sharp, it's all very deliberate and mathematical and works out to some round number in the end. Why it's called Errata, the world may never know. I'm still having trouble finding the mistakes, and I've been looking all over for them.