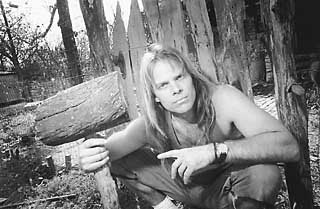 The House of Thor

In Norse mythology, Thor was a scion of Asgard, land of the immortals, son of the Allfather himself, Odin. Possessed of sturdy thews, a long, bushy mane, and a powerful magic hammer, Thor strode the clouds sending down torrential rains and booming noise upon the heads of hapless mortals below. He was, in short, the God of Thunder. In Austin mythology, Thor's story contains eerie parallels. One of many musical godlings in training somewhere deep inside the vast halls of Thundercloud Subs, he received his name courtesy of Ron Williams, then of clan Pocket FishRmen. The legend goes that the Allfather -- in this case, the Thundercloud General Manager -- sent down a decree that there were "too many Michaels" roaming the halls and that all but one must surrender their name. Williams suggested that one Michael in particular, possessed as he was of long blond locks and a Norse build, should take the name Thor, and thus it was that he did abandon his former appellation, take up not one but two magic stick-hammers, and use them to make powerful noise that would shake the ground around his feet.

Prior to his renaming, the young Austinite's saga echoes that of many other locals down through the years: Thor was classically trained, serving a stint in his junior high school band of the mid-Seventies, playing in the high school symphony, and fooling around with the piano in college before turning to the study of Latin percussion. That led to his attending L.A.'s Musicians' Institute, which Thor describes as "a dive-y warehouse sort of place" where the central course was woodshedding, and eventually the La Porte, Texas, native's move to Austin to complete his art degree.

"That never happened," Thor bemoans. "The UT art department was -- well, it was nothing like the Musicians' Institute, which had a free, alive atmosphere."

Fortuitously, with his departure from UT, more local music work began engaging the rapidly improving drummer. In 1987, he formed Stick People with now-renowned recording artist and producer Craig Ross. Besides the two friends' teaming, the group was notable for its introduction of singer Malford Milligan, later of Storyville and Blue Monday fame, to the local music scene. "We found Malford in the grocery store," recalls Thor of his days toiling in the HEB aisles. So, Stick People took it upon themselves to rescue Milligan from his then-current musical project, an Eighties techno band called The Coz. The rest, as they say, is history.

Unfortunately, it wasn't much later that Thor almost became history himself. He's shy with the details, but the Stick People story is a sadly familiar, all-too-common tale in Austin musical lore. As one of the first early New Wave-era Austin bands to begin attracting industry attention, what began (like most bands) as a group of friends making music together and having fun soon became "Big Business."

"Sony Music Publishing ate us up and turned us into vomit," says Thor. "[Afterward], I went away to San Francisco, and though I didn't know this, I was programmed to self-destruct. I drove out there, and three weeks later, that's exactly what I did."

Following a massive breakdown and a subsequent "revelation" that suicide was his next logical life maneuver, Thor phoned his sister, who talked him out of his radically final plans and into moving back to Texas. He began seeing a psychiatrist, he says, and about a year later "resurfaced as a human being."

Out of these experiences, the formerly mighty Thor evolved into a man who not only wanted nothing to do with the money-driven world of the music business, but also one who was skeptical about just how much contact he wanted to have with the world in general.

"I was really shy about the whole music thing," he says now. "I was going to be a painter, because I couldn't talk to people or deal with them in that depressed state, though I could still paint. Probably better than I can now that I'm "all right.'"

Eventually, Thor met up with Rob Halverson and found him to be "not someone who could be corrupted by the industry." Slowly, he began to feel good about playing music again. His many and varied musical experiences since have included runs with Rebecca Cannon's Scarlitt outfit and former Poi Dog Pondering violinist Susan Voelz, the latter of whom he accompanied on a low-budget U.S. tour. That took him to Bloomington, Indiana, home of sometime John Mellencamp fiddler/solo artist Lisa Germano, who in turn hired Thor and Ross to perform with her a year later. And finally, though he still lives in Austin, Thor realized a longtime dream by becoming a member of the dark, grating, New York-based cult band the Swans. 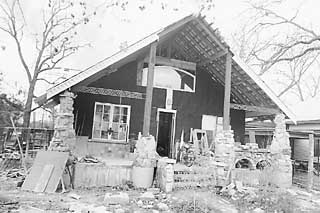 The House of Thor (Photo By John Anderson)

"When I got back into playing music after having gone mad," he explains, "I decided I wouldn't have any hangups about approaching people way more famous than me. Music has classes like society does, but I decided I wouldn't make myself a victim of such things, and I made a vow to approach whoever I really admired and say, "Hey, I want to play with you -- you need to hire me.'"

Starting things off with a fan letter, Thor did just that, and after a brief correspondence, Swans founder Michael Gira invited the ecstatic drummer to record with the band on its latest release, which came out under the group's new moniker, Angels of Light.

Similar chutzpah also put Thor on a tour with Gretchen Phillips, whom he calls a "fantastic, famous diva of punk rock." Between stretches on the road, Thor keeps himself sane with plenty of other creative outlets, including teaching four days a week at the Griffin School (an alternative education setup "that you and I should've probably gone to"), painting, performing, recording ambient and other musics under his own name, and issuing a series of seemingly uncharacteristic, Maxon Crumb-like pornographic comic and coloring books.

Besides a renewed comfort in playing music with friends, recording, and the occasional visual arts project, Thor has found a new use for his vaunted hammer -- as a device with which to pound nails into wood. And not just any wood, either. The environmentally conscious drummer has now undertaken his dream project: purchasing what some would call a "fixer-upper" and what others would call a "money pit" in East Austin and beginning to create his own Valhalla on Earth.

"I'm building this castle with no money, and I'm building it out of mostly recycled materials," he says of his construction project, which involves a house previously declared "uninhabitable," a term he's intent on eradicating with his own two hands. "It's really fun," he reports gleefully, "like building a fort when you were a kid, but you get to keep it!"

He's not kidding about that recycling thing, either. Refusing to kill even one innocent tree for its wood, the gentle Thor instead has procured the bulk of his dream home's materials by searching out already-dead trees and having a local company mill the lumber for him, at a rate he says comes out cheaper that other, more common procedures.

Of the mansion-in-progress, an undertaking few would have endeavored at all, and far fewer come even close to completing, Thor says his path has been amazingly hassle-free.

"I got a permit before I ever started and was told by scores of people that the city was going to give me endless grief because I'm adding a story, and doing all this stuff," he explains. "But they've been so cooperative and so cool."

The permit, he relates with lingering astonishment, cost him only $80 and took some 45 minutes to obtain.

"The lady was really cool. I showed her my plans and she said, "Eh, looks pretty good to me!' And my inspector guy, who I have to call once in a while and have him come check things out, he's as cool as she is!"

The once-foreboding clouds certainly seem to have parted for this Thunder God, leaving naught but sunny skies ahead. Beaming, he studies a wallet made for him by one of his students, Tish Hinojosa's son Adam.

"This is all duct tape," he exclaims, carefully examining each fold and pocket, "no cardboard or anything!"

Clearly, this is one admittedly mortal Thor who has learned to enjoy the basic, essential things in life, from friendship to music, from the satisfaction that comes from doing things for oneself to the inner warmth borne of passing knowledge on to the next generation. Such things are the food of the gods indeed.